A WATCH awarded to a World War I soldier has been found by a dog and returned to his family, eight years after it was stolen.

Sgt Walwyn Oram was given the engraved timepiece for his bravery at the Battle of Passchendaele.

It was cherished after his death in 1970 by daughter Nancy Dyer, who was devastated to lose it in 2011.

Her daughter Elizabeth Spyvee explained: ‘My parents’ house was burgled. They took all of my mum’s jewellery and my grandfather’s watch. We searched high and low — I contacted newspapers, we did leaflet drops and contacted pawn shops.’

Nothing came of the search and the family had almost given up hope — until a dramatic breakthrough out of the blue two weeks ago.

Ms Spyvee, 52, said: ‘I was so fed up with Brexit news on the television that I was flicking through Facebook — and there the watch was.

‘A woman — Cherilyn Morgan — posted that she had been out walking and her dog, Mickey, had had it in his mouth.’ Ms Morgan had contacted several museums about the watch after finding it in Dursley, Gloucestershire, but with no luck. She put it away for months before the social media appeal. 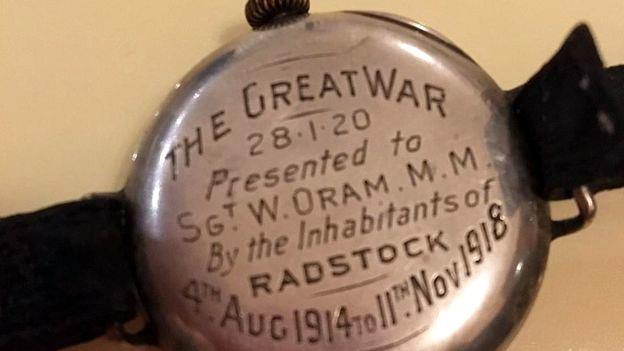 It was returned to thrilled Ms Dyer, from Dursley, in time for Remembrance Day. ‘To get the watch back is the pinnacle of our happiness,’ the 82-year-old said. ‘Nothing else matters — none of the other jewellery. What Cherilyn did was absolutely amazing. It’s just like a miracle that she found it and found us.’

Sgt Oram, known as Jack, was given the watch by the people of Radstock, Somerset, in 1920.

He had been with a local battalion which was decimated in the fighting and he had to be transferred. In his new Hampshire unit, he stayed behind enemy lines to protect injured comrades at Passchendaele in Belgium.