MORE people have died of coronavirus in London than were killed by Hitler’s Luftwaffe in the capital at the height of the Blitz, new figures reveal.

There were 4,697 fatalities caused by Covid-19 in the four weeks to April 17, 20 more than were inflicted during the worst four weeks of nightly bombings in October 1940. And across England and Wales, the week to April 17 was the worst on record for deaths from any cause. There were 22,351 — 12,000 more than normal.

The virus death toll in hospitals rose by 586 yesterday to 21,678 — a relatively modest increase that fuelled hopes the crisis had peaked.

But deaths linked to the virus in care homes shot up by 2,375 to reach 4,343 in the week to April 24, revealed the Office for National Statistics. There have been 24,243 deaths involving the virus registered across the UK — although the true toll is thought to be far higher.

And as infections worldwide passed 3million, Britain was on course to be Europe’s worst-affected country, second in the world behind the US, according to a graph published yesterday. 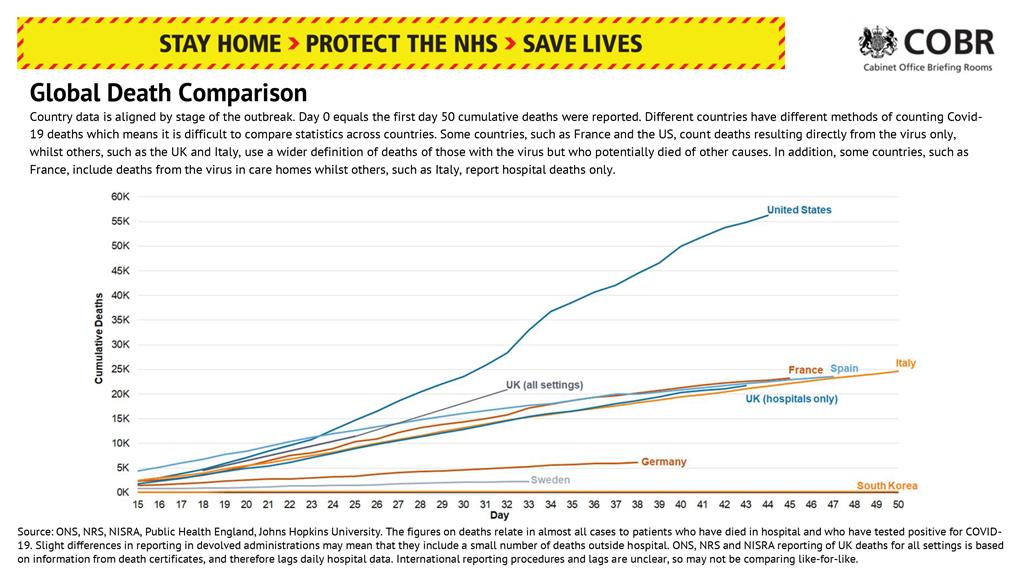 Health secretary Matt Hancock said testing would be extended to all care-home staff and residents, people who need to travel to work, plus all over-65s and people they live with.

He insisted: ‘We have been testing right from the start in care homes.’

But on March 12 the chief medical officer Chris Whitty announced that testing would ‘pivot to only people in hospital with symptoms’.

Deaths from all causes in care homes hit 8,000 in the week to April 17 — far more than average.

And there are fears that a lack of screening and personal protective equipment has led to thousands of unrecorded Covid-19 fatalities. Jenny Smith, boss of the Westcliff Lodge home in Westcliff-on-Sea, Essex, said a third of the residents there had died in the past three weeks.

‘We’re all still adjusting and trying to process the loss,’ she said. ‘The loss and the pain and the devastation.

‘We have many people off sick as well with suspected Covid, so we’ve been under tremendous pressure.’

Sam Monaghan, the boss of Britain’s largest care home charity MHA, said he was paying five times over the normal rate for face masks after government supplies dried up. ‘The ONS figures are finally beginning to show what we have known for weeks, that care homes are sadly the most affected area of society,’ he added. ‘We have had 294 residents die from suspected coronavirus.

‘I say suspected, because only 84 had been tested to see if they had it.’

Mr Hancock said that daily testing capacity had topped 70,000 and 25,000 home testing kits would be made available every day by the end of the week.

‘From construction workers to emergency plumbers, from research scientists to those in manufacturing, the expansion of access to testing will protect the most vulnerable and help keep people safe,’ he added. But visitors to the government website found access to postal tests disappeared by lunchtime for the third day running.

‘We should have had this testing at the very beginning,’ said the National Care Association’s chair Nadra Ahmed.

She added: ‘We’re now trying to play catch up. Why is it that PPE was all diverted to the NHS? If it had been planned properly, we wouldn’t have got into the situation we have.’

Mr Hancock said: ‘We’ve been moving heaven and earth to move the amount of PPE we need to the front line.

‘That system is getting stronger all the time but it’s a mammoth thing to do.’