WHEN retired nurse Joan Miller sat down to help her ten-year-old grandson with his maths homework, she found herself struggling to recognise unfamiliar topics and techniques.

It was hardly surprising. The last time Joan, 71, studied maths, she was a teenager taking O levels and Elvis was in the charts.

But Joan’s solution to her mathematical problem was to form the Maths for Grandparents class in April 2017. Eight grateful pupils signed up – with a combined age of 513 — and after a year of study, completed the same primary school SATs exam that their grandchildren were facing.

Joan, who runs her classes as part of the U3A charity in St Albans, Hertfordshire, says: ‘I was trying to help my grandson with his maths, and I realised I was just confusing him. Methods had totally changed from the days when I did maths at school, and we simply learned by rote. I’d never done data handling and I didn’t know what venn diagrams were.

‘I bought myself a SATs book, and then I thought “I’ll start a group”. I advertised it through a newsletter run by the U3A charity and my first class signed up.

‘I started by reading a chapter ahead of the group, to get a grasp of the topic, and then we’d go through it in fortnightly class, held in my own home.

‘It’s helped us all bond with our grandchildren, as we help them with their maths homework. I can be of use to my grandsons Peter 12 and Dan, ten, who’s preparing for his SATs.

‘We’ve had fun in our classes, especially measuring circumferences with pieces of string. To do quarters and eights and 16s, we made pizza out of playdough and cut it up.

‘When the year ended, I got a copy of the SATs paper the class tackled the questions. We all passed — and now a second year of pupils have signed up.’ 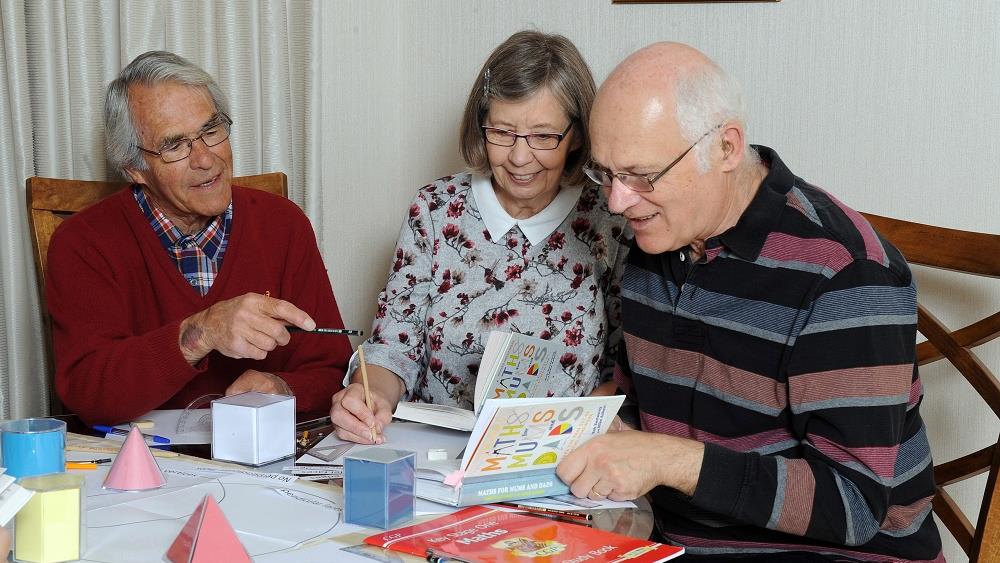 Sam Mauger, CEO of U3A, a charity which brings together retirees to continue learning, says: ‘This maths class for grandparents has been a real success, and is benefiting three generations — the grandparents who want to understand maths and its changes, the parents who have limited time and the grandchildren who are under increasing pressure with testing and results. We’re thrilled to see so many people have benefited from Joan’s maths classes.’

Pupil Sandy Cohen, 70, a retired community care officer from St Albans, adds: ‘It must be the only maths class in the country where we ignore our aches and pains in order to concentrate on what the teacher is saying.

‘I joined because I have five grandchildren from 14 down to just five, and I was particularly aware that I was confusing them when I was helping out, because I didn’t understand they techniques they learn in schools these days.

‘My grandchildren think it’s hilarious that Nana’s gone back to class, but they are really appreciate the fact I can help them out more. Grandparents are an extra layer of help that parents need. So many mums and dads work hard during the week, and they don’t just need grandparents to pick the kids up from school — they need them to physically sit down and help them with homework.’

Member of the group Joan Altman, 73, a retired office administrator from Radlett, Hertfordshire, says: ‘The last time I actually did any maths in class was in 1962, when I sat my O Level — which was the GCSE equivalent. Elvis Presley was number one in the charts with Good Luck Charm.

‘When I was at primary school my father made me sit at the table every evening and he would throw questions at me and make me do my times tables.

‘But I’m amazed at how much today’s primary school children are expected to know, and be able to work out. In our lesson last week, we tackled a maths problem that is set for five-year-olds.

‘They had six coloured ribbons each at a different length and given clues like “yellow is longer than black” and had to put them in order. It’s amazing that children who are so young can tackle puzzles like these.

‘My grandchildren are in secondary school now, and I feel I understand more of what they are doing. I’ve even got the hang of geometry, which could be a foreign language to me.

‘I read the class about in our monthly newsletter and joined last September. It’s massively increased my confidence.

‘Meanwhile my generation are so lucky. We’ve got charities like U3A giving us opportunities to join clubs and use our brains.’

The oldest member of the class, 81-year-old Peter Irwin, recalls: ‘I last studied maths more than six decades ago, and things were very different then. If the maths teacher was cross, he’d hurl the board rubber across the room at you — and they’re certainly not allowed to do that these days!

‘I ended up doing A level maths, but it was very different from the maths they do today. Now, as our grandchildren have started to sit their SATs, I’ve been able to actually help with their homework and help them study. It’s a great feeling.’