PRINCE HARRY has leapt to the defence of his father, saying Prince Charles supported him and Prince William after their mother’s death.

The royal spoke out after Charles’s public approval rating took a sharp nosedive in the run-up to the 20th anniversary of the car crash that killed Princess Diana.

The 32-year-old said: ‘One of the hardest things for a parent to have to do is to tell your children that your other parent has died. How you deal with that I don’t know but, you know, he was there for us.’

Harry added: ‘He was the one out of two left and he tried to do his best and to make sure we were protected and looked after. But, you know, he was going through the same grieving process as well.’

Harry also appeared to backtrack after previously saying that walking behind his mother’s coffin past huge crowds at her funeral was something ‘no child’ should ever face. He said he ‘genuinely had no opinion’ on whether the decision — said to have been pushed for by aides of Charles — to include him in the procession was right or wrong.

‘Looking back now, I’m very glad I was part of it,’ he said in an interview for 7 Days, a BBC documentary about the week after Diana’s death that will be screened on Sunday. 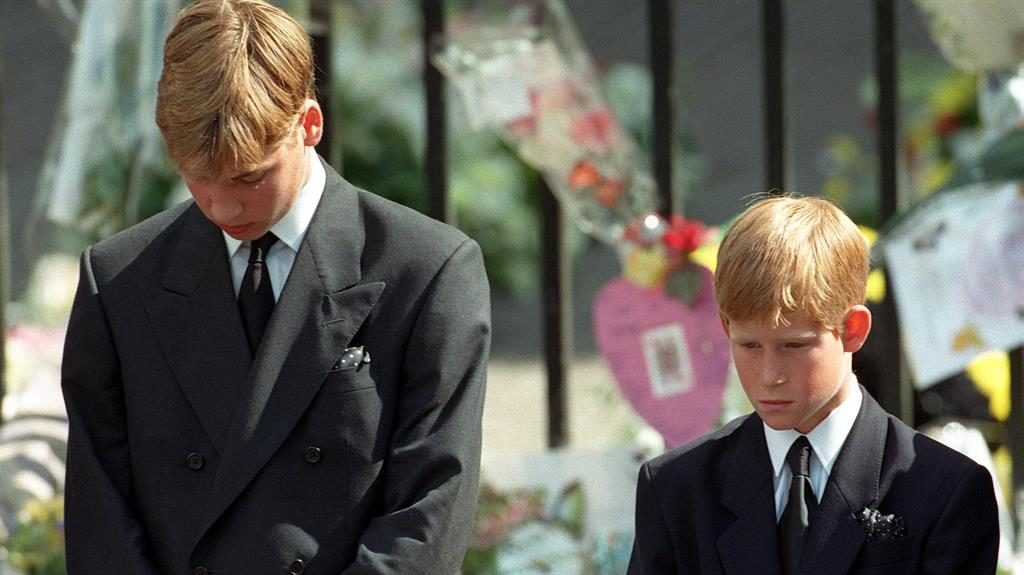 William, 35, confides in the programme that he used his fringe as a ‘safety blanket’ during the procession. ‘It sounds ridiculous but I felt if I looked at the floor and my hair came down over my face, no one could see me,’ he said.

William also defended the Queen — criticised for staying at Balmoral Castle in Aberdeenshire amid the outpouring of public grief over the tragic crash.

‘She felt very torn between being grandmother to William and Harry and her Queen role,’ he said. ‘Everyone was surprised and taken aback by the scale of what happened and how quickly it all happened, plus the fact, you know, my mother had been challenging the royal family for many years beforehand.’

Harry took the opportunity to condemn paparazzi who took photos as Diana lay dying, having played a part in the crash by chasing her car. ‘Every time she went out there’d be a pack of people waiting,’ he said.

Only 36 per cent of the public think Prince Charles has made a positive contribution to the royal family, down from 60 per cent in 2013, a YouGov poll shows. More than a quarter think he has had a negative impact and only 14 per cent want his second wife Camilla to be Queen.

Public opinion is likely to have been soured by recent revelations about Diana’s life with Charles before they divorced.

The princess once confided to a cameraman that she had caught her husband ‘talking dirty’ to Camilla in a phone call as he sat on the loo.