DECLAN RICE was left in no doubt about the esteem West Ham captain Mark Noble holds him in at last Saturday’s match with Burnley.

‘We get on so well. Mark… I can’t describe what he does for me. The other day, my parents came to watch me and went in the captain’s lounge,’ Rice says. ‘My mum said to him, “Thanks for looking after Dec” and he said, “I treat him like my son”. It’s nice to hear someone like him, who has played so many games in the Premier League, is looking after you.’

While Noble is looking out for his 19-year-old protege, Rice is making his mark on a Hammers side now kicking into gear after losing their first four Premier League games this season.

He played in just one of those defeats but has been an ever-present for Manuel Pellegrini’s side since, the defensive midfielder’s impressive form continuing in a 4-2 home win over Sean Dyche’s side last weekend.

From the number of times Rice mentions 31-year-old Noble when speaking to him at the launch of West Ham’s Players’ Project this week, it is clear how big a role the one-club man has played in his development.

Rice knows he is one of the fortunate ones to even be playing first-team football. ‘It’s crazy. When I first started, I spoke to Noble and he said you’ll end up realising how many players you played with and trained with end up dropping out of the game,’ he tells Metro.

‘I’ve played with him for two years and it’s true — there are so many. Luckily for me I have great people around me, a great club captain in Mark and great people who help me every day. I’m privileged to be playing week in, week out.’

It has not all been plain sailing, however. Following the 4-0 opening-day defeat at Liverpool, in which Rice was substituted at half-time, new boss Pellegrini left him out for three games.

‘He was probably right to do that because I wasn’t good enough at Liverpool,’ Rice says. ‘I knew I had to improve, I got brought back in against Everton and haven’t looked back since. I’ve been through it before and I’m a mentally strong person. I know that if you’re not performing you are going to be brought off.’

Rice has been a revelation since, making it no wonder England boss Gareth Southgate and his Republic of Ireland counterpart Martin O’Neill are locked in a tug of war for his services.

The London-born player, whose paternal grandparents are from County Cork, admits: ‘I’m taking my time to make a decision on who I want to play for.

‘Who’d have thought I’d have this decision to make at 19-years-old? It’s been a lot to take on but I’ve managed it well. It’s a decision only I can make and it has to come from my heart.

‘Whatever decision I do make will be the right one.

‘I’m focusing on West Ham and Martin and Gareth will know in the near future of my decision.’

It is not just national teams fighting over his services. The Hammers look set to hand Rice, who signed for the club aged 14 and whose current contract is up in June 2020, a new deal with a significant pay hike.

But while Hammers fans have been clubbing together to crowd-fund a deal, there is also reported interest from Chelsea for a player they allowed to leave four years ago.

Rice says: ‘I love West Ham to pieces and the contract is going to be sorted out — we’ve been speaking about it for a while.

‘I’m not really bothered about what other clubs are interested. I’m just focused on playing for West Ham.

‘The manager says I need to keep improving and that will come, and that’s my take on it. I’ve just got to keep playing, keep my feet on the ground and I will end up signing another contract at West Ham.’

It has been Rice’s transition from centre-back — where he played last term — to defensive midfield that has impressed so greatly, with summer-signing Jack Wilshere’s injury giving him the chance to hold down a regular place.

‘Last season I played in a three (at the back) but now Manuel has come in and seen an opportunity for me to play in the middle. He has seen my ability, and that I have a defensive mindset, and thought I could do a job and I have done,’ Rice says.

He admits he still has much to learn in the role — with West Ham fans urging him to go forward and score his first goal for the club — citing ‘the positioning side, when to drop in for the centre-halves, not vacating that space in the centre of the pitch and leaving a massive gap’.

He adds: ‘You’re playing world-class players every week so you have to be switched on and concentrated for the full 90 minutes.

‘Maybe I can travel forward a bit more with the ball and try a shot. Every time I get near the box, all I hear from the crowd is, “Shoot!”.’

Not that Rice, having made 43 first-team appearances for the Hammers, is short of self-belief.

‘There was more pressure when I first played for West Ham because nobody had heard of me,’ he says.

‘I had to be on top of my game for the fans, to get them on my side.

‘Now, the way I’ve been playing this season, it’s all positive and I’m glad the fanbase are happy with my performances and happy with me in the starting XI every week.

‘Playing and captaining the Under-23s and 18s has helped — my personality means I’m not scared to say anything.

‘I never really get nervous, it’s weird. I’m always confident in my game and that I’ll play well.

‘I’m coming up to 50 appearances for West Ham — if I do that before I’m 20 that’s really crazy. It’s everyone’s dream to be playing football in the Premier League.’

As he prepares for tomorrow’s trip to a Huddersfield side buoyed by their first win of the campaign over Fulham on Monday, Rice credits Pellegrini, who won the Premier League as Manchester City manager, with fast-tracking his development.

‘The manager’s been a breath of fresh air. We’re all enjoying this attacking style of football. He’s been really good for me,’ he says. ‘I used to watch him managing City on Sky Sports growing up — so to be playing and starting for him is incredible because he’s worked with the best players in the world pretty much all his career — at City, Real Madrid…’

Rice tails off as we focus on what is going on in front of us — the launch of a scheme which the club say is the most ambitious and integrated community programme ever organised by a Premier League club.

Like his colleagues from both the Hammers’ men’s and women’s teams, Rice will be an ambassador for an area of community work.

West Ham have already invested £13million in education, health and social mobility projects in the London Borough of Newham since 2013 and this week pledged a further £10m over the next three years.

‘I’ve not done anything like this for ages — it’s good to work with people who have disabilities and see their perspective on football.

‘It makes me realise how lucky I am, to be honest.’

It seems Rice is well placed, on and off the field, to eventually take over Noble’s homegrown hero mantle.

■ The Players’ Project represents West Ham United’s commitment and vision to use to the power of sport to motivate, educate and inspire people in the local community. First-team players will be helping to drive core community programmes that are delivering life-changing experiences throughout the season 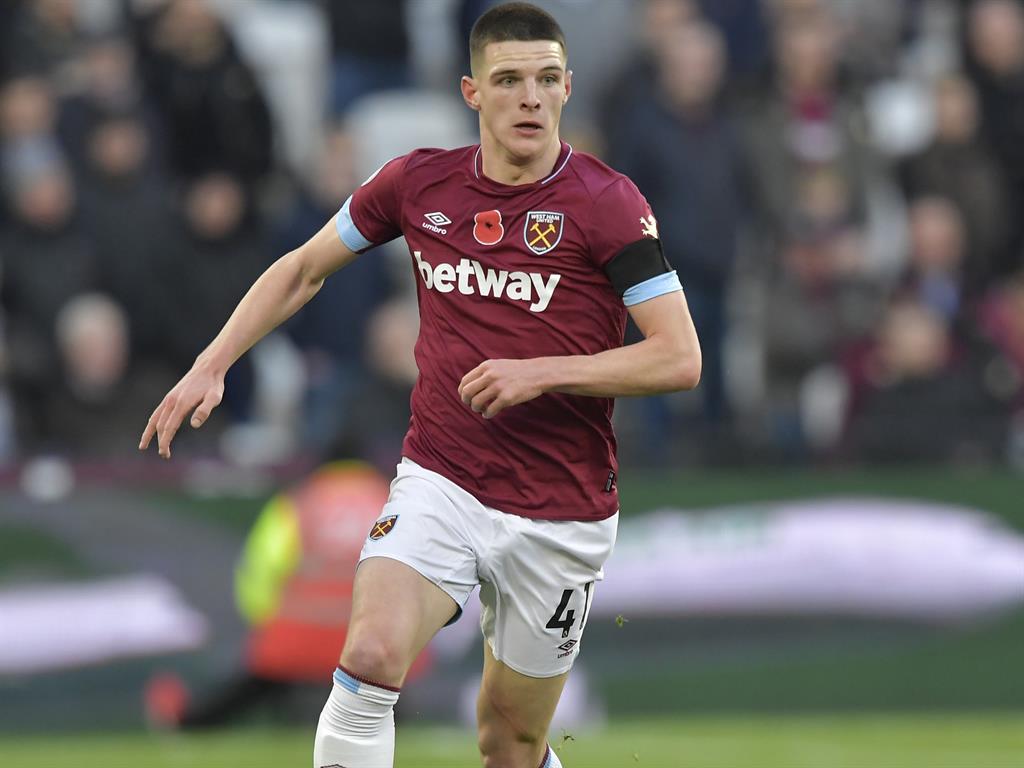 2006 — A seven-year-old Rice joins Chelsea’s academy. After his release at the age of 14, he moves across London to West Ham

2017 — He is called into the first-team squad for the first time in April, making his debut against Burnley on the last day of the season. Rice’s full debut comes in August against Southampton