BRITONS are being urged to ‘stay at home and save lives’ after officials warned that the nation is heading for a ‘rapid escalation’ in the spread of coronavirus.

In an extraordinary press conference yesterday, Boris Johnson advised members of the public to work from home, shun ‘non-essential’ contact with others and scrap unnecessary travel.

He called on people to avoid ‘pubs, clubs, theatres and other social venues’ — but did not order them to be closed down, prompting anger from owners who fear they will not be able to claim on insurance.

Mr Johnson also revealed that emergency services will no longer provide support at mass gatherings such as music festivals and sporting events, which means they will be unable to go ahead. Last night it was announced that the Grand National has been cancelled.

Hospitality industry representatives warned of ‘thousands’ of businesses closing and ‘hundreds of thousands of job losses’.

Vulnerable people, including pregnant women, those with health conditions and all those aged over 70, are likely to be told to self-isolate at home by this weekend. The restrictions will apply for at least the next 12 weeks and those at risk are being urged to avoid even going to the shops.

Entire households are being told to stay indoors for a minimum of 14 days if anyone they live with develops symptoms like a persistent cough or a high temperature. But the prime minister continued to resist calls to close schools despite reports that thousands of worried parents are pulling their children out of classes anyway. 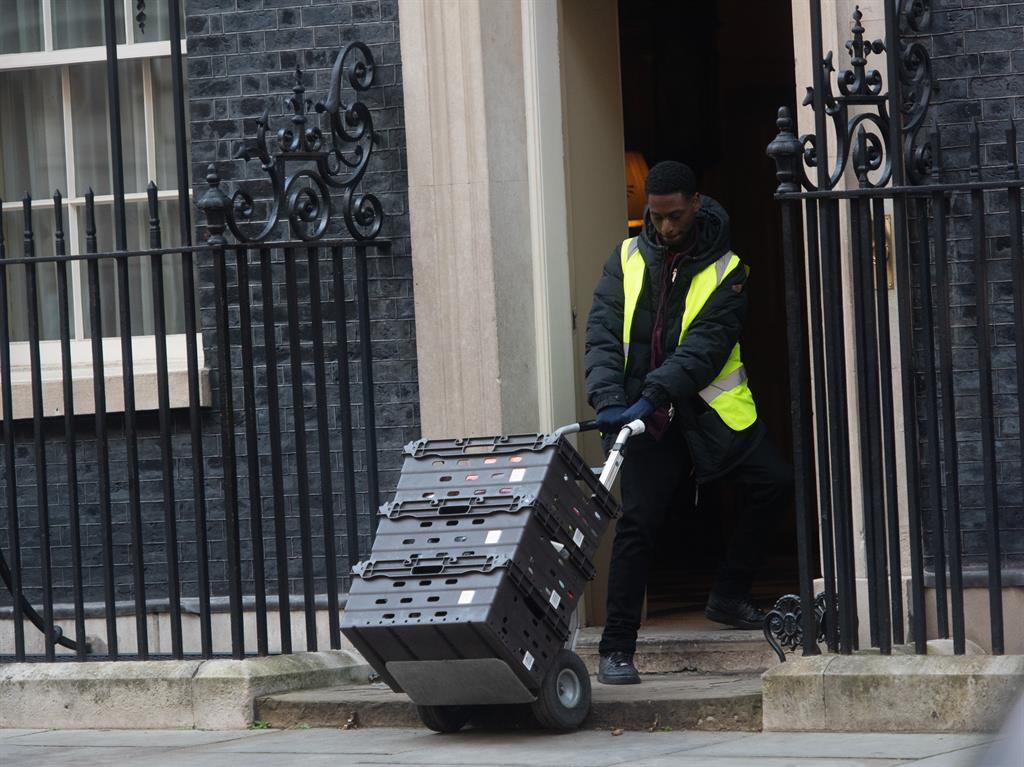 The sweeping measures were announced as the UK death toll climbed to 55 yesterday — up 18 from Sunday. The number of confirmed cases soared to more than 1,500 with almost a third in London.

Mr Johnson, who has been attacked for not acting sooner, insisted they were necessary to save lives.

Sir Patrick said that the rate of spread of Covid-19 in the UK was approximately three weeks behind Italy, rather than the four as previously thought.

The Italian government reported 349 deaths yesterday, taking the total number of fatalities to more than 2,100.

Sir Patrick warned: ‘It looks like we’re on the fast upswing, or just about to get there, and that’s the reason to want to get in quite quickly with these measures.’

In France, president Emmanuel Macron announced that a nationwide lockdown will come into force today.

All residents will be ordered to stay at home for at least the next 15 days. They will only be allowed out in emergencies. ‘We are at war,’ Mr Macron said in a TV address to the nation.

Meanwhile, Germany closed its borders and authorities in the US advised against gatherings of more than ten people.

Donald Trump urged Americans to ‘rally together as one nation and we will defeat the virus’. But he admitted the crisis could last until August. The Dow Jones shares index closed down 12.9 per cent.

Prof Whitty warned that further restrictions may be introduced in the UK, and that the country should expect to be in it for the long haul. He said the advice would be in place for ‘weeks to months… depending how it goes, it may be longer’.

Prof Whitty also promised that the UK would ‘scale up’ the number of people being tested, following criticism that officials had decided to prioritise those already receiving hospital treatment.

Amid a clamouring from some parents for schools to close, Mr Johnson said: ‘We’re keeping all measures under review.

‘We think at the moment on balance it’s much better if we can keep schools open for all sorts of reason, but I appreciate this is, again, something that we need to keep under review.’

Education secretary Gavin Williamson is considering postponing GCSE and A-Level exams until September because of the outbreak. Yesterday, the minister met representatives from the NAHT school leaders’ union, the Association of School and College Leaders (ASCL) and the Confederation of School Trusts (CST). ASCL general secretary Geoff Barton said there was a ‘sense of urgency’ for a decision to be made around school closures and postponing exams.

He said Mr Williamson was made aware that it was becoming ‘more and more difficult to answer some of the practical difficulties in keeping schools open’ with more staff self-isolating. They will meet the minister again tomorrow.

Many experts said they supported Mr Johnson’s new measures to try to slow down the spread of Covid-19.

Dr Doug Brown, head of the British Society for Immunology, said the plans would ‘help buy vital time for our NHS’.

Prof Mark Woolhouse, from the University of Edinburgh, said the actions ‘remain consistent with the scientific evidence available and are to be welcomed’.

Prof Alan McNally, of the University of Birmingham, said: ‘I think the government have taken a step in the direction that is needed. There is no point in debating potential time lost and so on. It is clear that social distancing needs to be happening now and today’s statements begin that process.’

Meanwhile, leaders of the G7 nations held an emergency conference call yesterday amid growing fears about the global economic fall-out of the crisis.

‘We resolve to co-ordinate measures and do whatever it takes, using all policy tools, to achieve strong growth in the G7 economies, and to safeguard against downside risks,’ they said in a joint statement.

In Britain, the government announced a £1.5billion aid package for Scotland, Wales and Northern Ireland.

Mr Johnson said the economy will take a ‘short-term’ hit from Covid-19, but should come ‘roaring back’ as the virus spread declines. After another turbulent day on the markets, with billions wiped off the values of shares, the PM acknowledged the economy was facing a ‘severe blow’.

But he said the ‘fundamentals’ of the UK economy remained ‘very strong’ -unlike at the time of the global financial crash of 2008 — and that it was well placed to recover.

‘Everybody sees that this is going to be potentially a severe blow for the economy,’ he said. ‘Everybody can see the risks that this situation imposes, the risk to demand, the risk to supply, but if we get it right and if we get the right response and if we work together then we can ensure that it is a short-term problem because the fundamentals of the UK economy are very strong.

‘This is unlike 2008 — there isn’t a systemic problem within the economy.’

Mr Johnson added: ‘If we can get the disease under control in the way that we’re describing, if we can flatten that peak and it starts eventually to decline’, then there was ‘absolutely no reason why economies worldwide should not come roaring back’.

The government said the Ministry of Defence was ready to tackle whatever problems lay ahead.

Defence minister James Heappey told MPs: ‘The Ministry of Defence plans for all things, whether it be for flooding, or indeed for pandemic.

‘We are planning for all eventualities.’

Speaking at a press conference, Dr Tedros Adhanom Ghebreyesus warned: ‘We have not seen an urgent enough escalation in testing, isolation and contact tracing, which is the backbone of the response.’

It comes after criticism of Britain for appearing to cut back on tests last week. But last night the government’s chief medical officer Prof Chris Whitty defended the UK’s ‘substantial’ testing figures, with more than 44,000 carried out. But he did say they would now ‘scale up testing’. He also said Public Health England was ‘very rapidly’ developing a test that could discover whether someone has had Covid-19 without symptoms, which he suggested could be ‘transformational’.

BORIS JOHNSON last night urged ventilator manufacturers to step up production as part of a national effort to defeat Covid-19.

In a conference call with more than 60 leading businesses and manufacturing organisations, the prime minister asked them to produce as many new machines as possible.

Health secretary Matt Hancock told the Commons: ‘We will buy as many ventilators as are made. It is not a question of putting a target on it, we are just going after as many as we possibly can.’