SINCE lockdown was announced back at the end of March, we have all seen a lot more of some of the most famous musicians’ living rooms than ever before. Questionable décor choices aside, more and more pop stars and celebrities have been going live from their houses.

One of the first to kick-start the trend of finding new ways to reach out to fans was Yungblud. Also known as Dominic Harrison, the 22-year-old Doncaster rocker was one of the first acts to live-stream due to lockdown. He originally came up with The Yungblud Show Live on YouTube.

‘It was so bizarre. It was an idea I started in my bedroom,’ he recalls. ‘I knew that I wanted to do something, and my fan base just ran with it so f*****g much that within 72 hours of having the idea, I was in a full studio with a camera crew and lights and special guests.’ 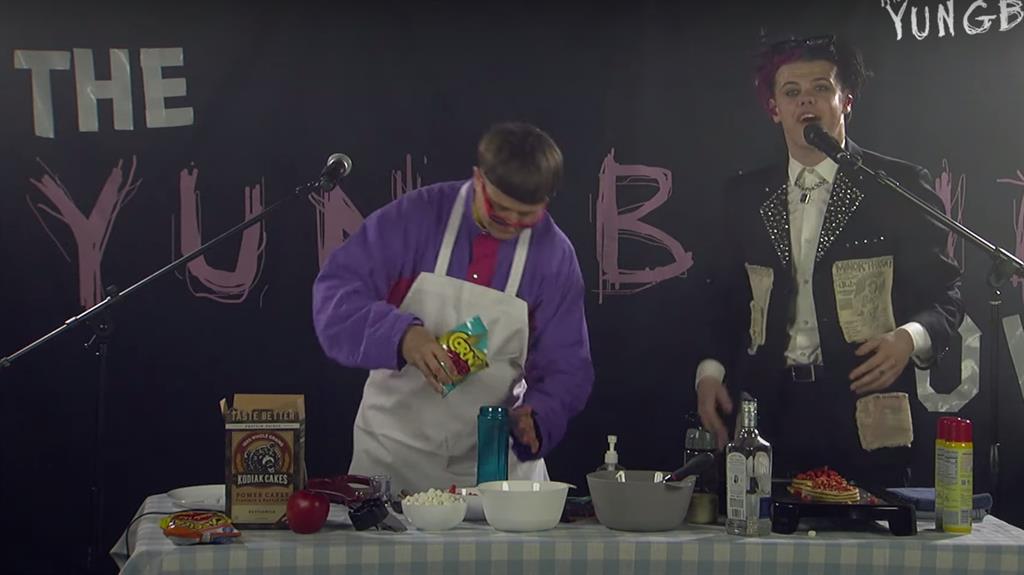 He still seems stunned as he recalls the scale of the reaction. ‘It’s all down to my fans, this family that I’ve created around me. They blow these ideas up and allow me to do these amazing things. I wanted to be the punk rock Jimmy Fallon or James Corden.’ There’s an image.

He’s currently holed up in a house in LA with his friends and they have been working on projects together. ‘I’ve never been this busy. We’ve got songs coming out and things to do. We’re busy little bees!’ He pauses. ‘I feel a bit suffocated in some ways. I miss my mum and Yorkshire puddings. I’m a b****y northern boy!’ he says before bursting into raucous laughter. ‘My mum’s sent me Yorkshire Tea and HP Sauce over, so I’m sorted there.’

Following the success of the first episode of the show, a second one followed, but stricter social distancing and lockdown rules meant no studio and in-person guests. That didn’t stop him. He launched the pre-recorded Stay Home With Yungblud streaming every Monday on YouTube.

‘Everyone was locked in their houses but we bought a green screen and some cameras and I just called up my mates. Machine Gun Kelly, Travis Barker, Kelly Osbourne and others. It’s a bunch of friends and entertainers making content to make people happy. I just wanted people to feel less alone. All of the songs are recorded in our separate houses. My vocals I did in my bathroom on an iPhone!’

He has just released a timely new single, called Weird, and the video was filmed at home, too. ‘I had such a mental year last year,’ he explains. ‘I almost lost my mum in a car accident. I was in a very public relationship that ended [with American singer Halsey] and we both were heartbroken. Heartbreak is a difficult thing to deal with.’ 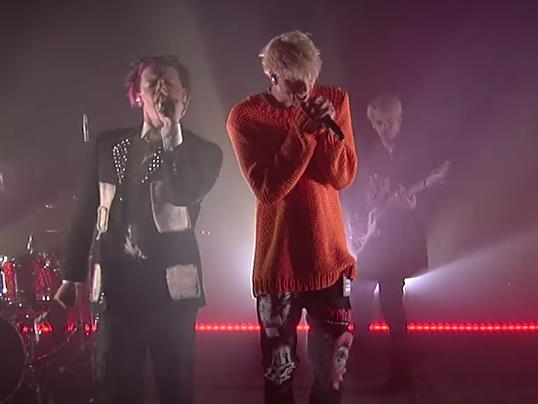 He pauses again. ‘I got very big, very quickly. The world felt like a maze that was constantly changing and I felt like I was going to fall down the cracks of it. It was a very weird time and this word weird, weird, weird kept going around in my head about how I was feeling. It really put things into perspective.

‘I want to sound hopeful and naïve and full of contradictions because that’s what humans and emotions are. It was going to come out later but I said it needed to come out now. What better time to bring out a song called Weird!’ he exclaims. You can hear him buzzing down the phone with excitement. Yungblud is relentlessly larger than life and his fans love him for it. You get the sense that he genuinely adores them, too.

‘This family is everything. It’s the beginning, the middle and the end of the story. Some people don’t understand it but when you see the connection, it’s us. It’s not me and them,’ he enthuses. ‘I love having conversations with them. It’s like oxygen to me. When I’ve done these streamed shows, I can see the comments rolling in. I can feel the noise, their support.’

Some fans ‘camp out’ in bedrooms and share videos of themselves jumping around. He has a message for them: ‘I love you. I know that times are weird and bizarre but all we can do is remain together and hopeful. I’m going to do everything that I can to remain connected to you as it’s so important to me.’ Can we expect more connections soon? He laughs again: ‘Of course! I’m always planning, always.’

■ Monday, Stay Home With YungBlud; Weird is out now; YouTube.com/yungblud