FIVE years since his first appearance as ranting TV news reporter character Jonathan Pie and actor Tom Walker, 41, is taking his creation in a new direction. After Tom’s most recent tour as Pie was rescheduled due to the theatre shut down, he has more time to work on his YouTube videos. The result is Jonathan Pie: Lockdown, which sees Pie swap his usual rants about news stories for a video diary about his time in social isolation.

‘It’s now more broadly comic than him attacking the Tories or Trump,’ says Tom. ‘We can see he’s already relying on the vodka too much. The satirical conceit of him ranting between takes as a news reporter has gone for a while.

‘You could watch it without having met the character before — it works in its own right,’ he says.

Tom was a struggling actor, paying the bills by doing a variety of other jobs, when he first created Pie. ‘I was an estate agent for a while. That was the most depressing 12 months of my life. The worst job I had was when I started doing Pie. I was working in a call centre that companies outsourced their HR to. I started at 5am and received phone calls from people describing their own diarrhoea. That’s what most people phone in sick with as no one questions it.’

His acting work included ‘outdoor Shakespeare’ and one episode of Heartbeat in which he played a man who stole an apple.

No Casualty or even a couple of lines in a Midsomer Murders? ‘No. Not even The Bill. That’s where my career was.’

His friends had been telling him to create his own work for a while before he decided to take the leap and create Jonathan Pie. The premise was that he’d play a TV news reporter and show the audience what he imagined news reporters talk about in between takes. 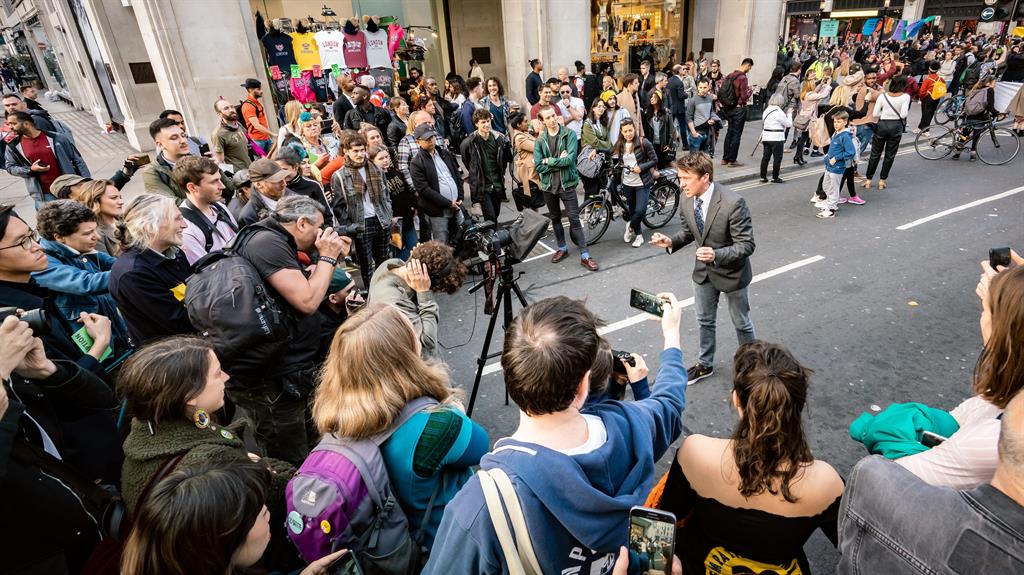 The third video he posted to YouTube, standing on College Green like many other TV news reporters but going off on a rant about everything that’s wrong with the world, went viral and Tom soon became a popular online political satirist, going on to sell out three UK tours.

‘After that video went viral, I knew a door had opened for me. If you’d told me then I would sell out the London Palladium and Hammersmith Apollo, I wouldn’t have believed you — but I’ve got a career out of it.’

Other popular videos include one denouncing Hillary Clinton following her unsuccessful presidential campaign, which has been viewed over 100million times worldwide.

‘I had four or eight years to have a go at Trump, so I thought let’s have a go at Hillary as she must have been an awful candidate to lose to him.’

More recently, Tom has been doing longer videos about a single subject, including Brexit, climate change and a pastiche of the Newsnight interview with Prince Andrew.

Not everyone has been won over, though. Some critics have accused Tom of being too right wing. ‘You’ve to be really stupid to think the guy that writes Jonathan Pie is right wing,’ says Tom.

‘I’ve had abuse from stupid, thick, supposed-liberal comedians calling me right wing and all sorts of horrible things. But that’s fine — I’m a believer in free speech even when it makes them look stupid. I haven’t been embraced with open arms by the comedy world.’

Tom points out that some of his other videos, such as one defending the BBC, have been criticised from people on the right who say he’s too liberal. By contrast, he says the audiences for his tours hit all demographics in terms of age groups and political views, with fans ranging from teenagers to people in their 90s.

For now Tom is enjoying his new approach to Pie — creating more of a character comedy piece than reacting to political news stories.

‘For the first time in my Pie career, I’m not putting pressure on myself to get the stuff out there — I have time to hone it. I want to see how I can make him more of a well-rounded character. We’ve learnt he’s divorced, he’s estranged from his kid and lives in a crappy flat in the middle of London.

‘You wouldn’t expect that of someone on the telly but he’s been though a messy divorce and has lost everything, which explains why he’s so angry with the world. You realise he isn’t angry with Theresa May or Boris Johnson, he’s angry with his own personal life.’

■ The Fake News tour starts at the Lowry in Salford on October 5. In the meantime, you can catch his Jonathan Pie: Lockdown videos, which are available on his YouTube channel, jonathanpie.com