THE year 2000 was a heady time of questionable fashion choices, the Millennium Dome and the launch of Big Brother and reality TV as we know it. It also saw the release of Hybrid Theory, the album that started Linkin Park’s stratospheric rise to being one of the biggest bands on the planet.

To celebrate the 20th anniversary, the band are releasing unseen footage from Projekt Revolution in 2002, as well as a boxset, and are streaming it with a live Q&A with the band tonight.

Brad Delson says all of their families and friends were involved in the plans for the celebration: ‘They were all going into their attics, rummaging through old boxes and just looking for things that had never seen the light of day. ‘We wound up amassing this incredible treasure trove of old songs, demo tapes, artwork, photos, even flyers, we would pass out on Sunset Boulevard,’ he smiles at the memory. ‘It really is a celebration of not only Hybrid Theory the album, but our adventure, trying to get signed, finding our sound, and then it culminating in creating this beautiful piece of art.’

However, Mike Shinoda admits he wasn’t sure at first. ‘My feeling was, why? What would we have to offer the fans that would be really worth it?’ he says. ‘The more our label, management, fans and our friends and families sent us things, and the more stuff we uncovered… it became really obvious what a fantastic project it is. I became a believer halfway through the process. I figured out what everybody was so excited about, I think.’

So much has changed over the last two decades, including the loss of their singer, Chester Bennington who died in 2017. Mike recalls the early days of the band. ‘The label had such mixed faith in us that they suggested I just play keyboards and not rap. They teased Chester with the idea of leaving the band and just building a new band around him. Thank goodness, he came to us, and said “this is what they said to me today.” We were like, “Oh my God, that’s crazy, what did you tell them?” “I told them to f*** off” he said. Thank God.’

Mike bursts out laughing. ‘We knew he was an absolute, one-of-a-kind, world-class gem. Chester was really humble about his talents, and about his place in music in general, I know that he under-estimated his importance to people and in music. You can’t quantify it, but if you could, he would come up with a number that was lower than what everybody else would come up with,’ he says, mystified as to why Chester couldn’t see what everyone else did. ‘Whenever people loved something we did, he was never prepared for how positive that felt. He always was surprised. It’s just such a nice way to be, isn’t it, to always feel like “oh, wow, they really like this”.’

Brad recalls the struggle to find a label. ‘There was a lot of rejection early on, for years. We showcased for so many record labels, some of them more than once because apparently we were also masochists.’ He grins.

The path to success wasn’t a smooth one, but Linkin Park stuck to their guns stylistically. ‘One of the main points of criticism was that we weren’t similar enough to other things that were popular, and there were suggestions that maybe if we just changed and imitated something, it would have been more palatable, but that would have been inauthentic,’ Brad says, shaking his head.

‘We had to either share our vision with the world or fall flat on our faces trying, but we weren’t going to pretend to be something we weren’t, even though we had bright coloured hair and ridiculous jewellery,’ he adds. 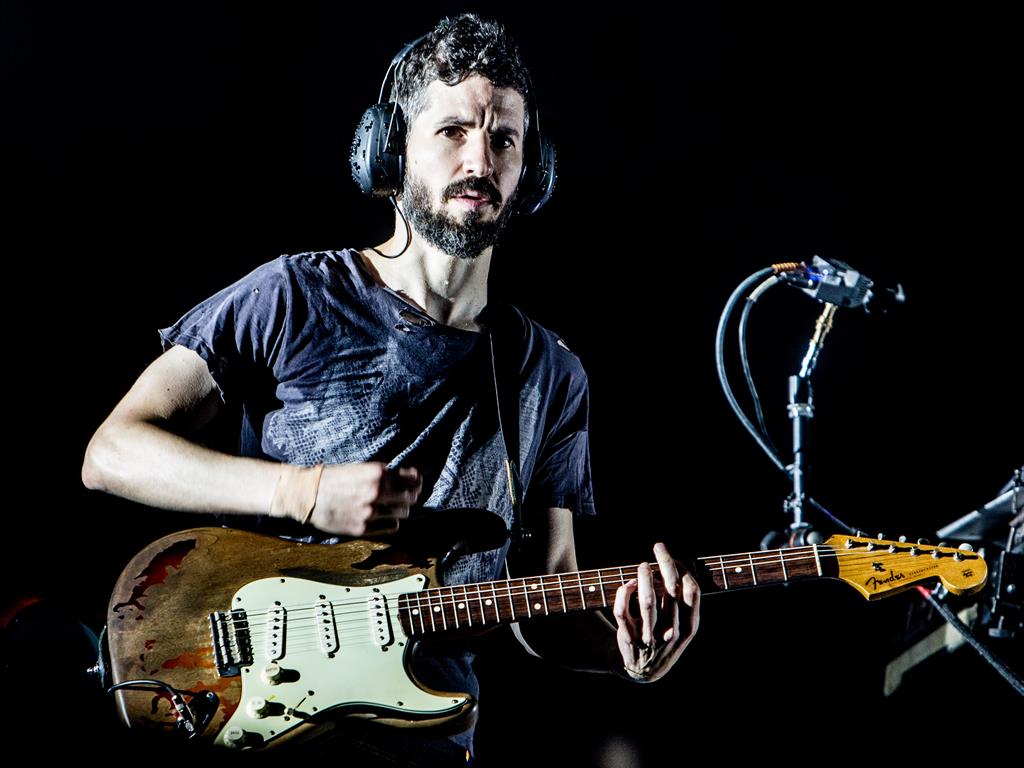 Evidence of their sartorial elegance can be seen in the unearthed footage from 2002 that will be shown today.

Mike isn’t afraid to laugh at himself. ‘It’s such a fun moment because we’re children in this thing! We all look like babies. We all sound like babies. We were all still figuring out who we are. I think it’s such a nice reminder that no matter who you are, you don’t have to know everything. We were on our way to being the biggest band on the planet that year, and you look at us in this footage and we’re just a bunch of idiots running around with no idea what we were doing,’ he smiles.

‘I feel like I grew up to be a responsible adult with my head on straight eventually, so it can happen.’

Brad has an important message for fans of the band: ‘We’re so proud to be celebrating Hybrid Theory. This was an album that was instrumental in launching our epic journey in music and beyond. It’s an album that people talk about so passionately today whether they discovered it 20 years ago or 20 days ago. We’re so grateful and privileged to have an incredible fan base all around the world, especially in the UK, and it’s a really special time for us to thank all our fans and celebrate.’