DAVID HARE may be one of our nation’s greatest playwrights, but when he was approached by director pal Jonathan Kent to consider rewriting Peer Gynt, he initially balked at the prospect.

In fact, he could barely even get through the unfamiliar Ibsen drama. A fantastical epic verse describing an unscrupulous man’s life from youth to grave, the play is notoriously unwieldy. ‘I thought, my God, this is unreadable. It’s so long and I just felt lost in it completely,’ says David. ‘But Jonathan said to have another go, and the second time I read it I could see it was a wonderful story.’

So he relented, and the fruits of his labours are now gracing the National Theatre’s vast Olivier stage. Renamed Peter Gynt, Hare’s free adaptation pulls it into the 21st century, throwing in songs, palm trees and references to Nando’s and the Bullingdon Club, while making its titular anti-hero Gynt -played with dazzling aplomb by rising star James McArdle — into a media tycoon with shades of a certain US president. 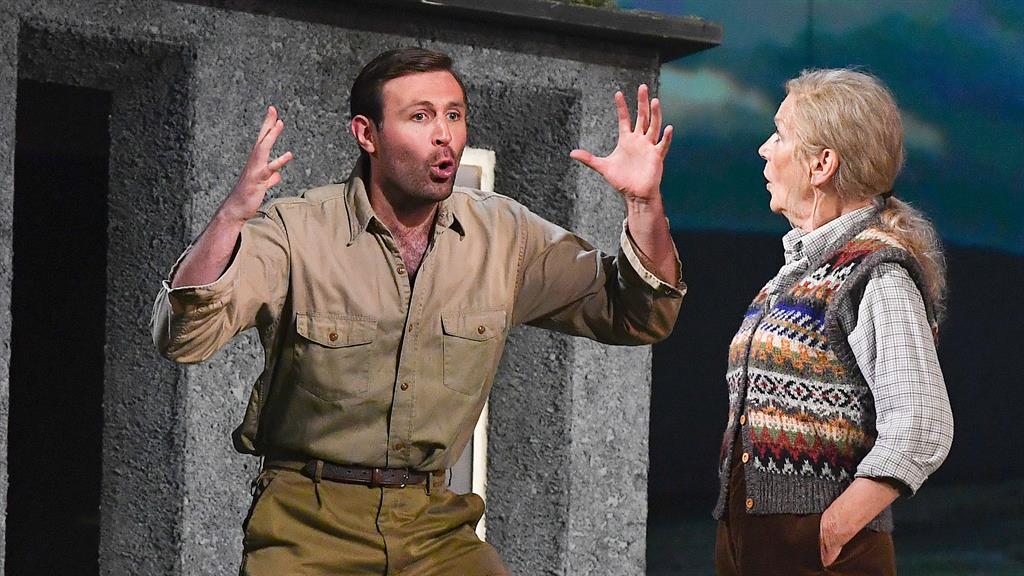 ‘The whole play is really a madcap adventure and possibly a dream, anyway,’ says David of his loose approach to the original text. ‘It’s an imaginary world that licenses you to do whatever you want.’

Why modernise it, though? Because, David says, the play’s key themes — individualism and the obsession with the self — couldn’t be more relevant to modern society.

‘Ibsen was writing an attack on the idea that we’re all on earth to fulfil ourselves. That was so fashionable in the 19th century and, God knows, it’s even more fashionable now. It seemed like a moment for a big, lavish satire on that idea.’

It’s been almost 50 years since David’s first play was produced but he has no plans to slow down as he moves through his seventies.

In fact, he’s creatively hungrier than he’s ever been: ‘You become more desperate because the whip of time is on your back,’ he explains. In particular, while keeping up his stage output, he’s been throwing himself into television work of late.

Last year, he had his first TV series produced, the procedural thriller Collateral, and his second, a four-parter called Roadkill, will be coming soon to the BBC. With the enthusiasm of youth, David says the whole experience of writing in an episodic format has been a thrill.

‘It’s like learning how to play the clarinet,’ he explains. ‘New skills are wonderful fun at my age.’

What’s more, alongside all this new work, revivals of his canon keep coming thick and fast. A new take on his 1978 classic Plenty recently played at the Chichester Festival Theatre, where it earned strong reviews, with critics noting the parallels between its vision of a beleaguered post-war Britain and the current Brexit malaise. Which inevitably raises the question: what does this oft-dubbed ‘state-of-the-nation’ playwright think of the current condition of our fair isles? He does not mince his words.

‘Rather than the provoked anger of the Thatcher era, what we have now is something nearer a sort of sullen despair. And the despair is the despair of people just watching the spectacle of the worst people in the country running the country.’

In Plenty’s protagonist Susan Traherne, David also created a brilliant female stage role at a time when they were depressingly scarce. Nowadays, the landscape has changed for the better for actresses, he thinks, though the theatre world doesn’t deserve the credit for that.

‘I was continually writing central female parts, and I had absolutely no effect on British theatre — and that remained the situation for 40 to 45 years. What has changed now is society has changed and that’s reflected in theatre but theatre’s not leading. If anything, it’s running along to catch up.’

Another concern David has is that the theatre industry has become ‘arthritic’, with not enough young people in key posts.

‘I became literary manager of the Royal Court at 21, which now seems unimaginable, just as Peter Hall became director of the RSC at 27. And all this was because nobody else actually wanted these jobs at the time. Whereas now, as we know, the sons and daughters of the middle classes all want to work in the arts.’

Not that, given his continuing work rate, he’s about to concede to youth, exactly. But don’t expect a sequel to his acclaimed 2015 memoir The Blue Touch Paper. That covered the first 30 years of his life, but he has no interest in addressing his life beyond that.

‘The highest compliment paid to The Blue Touch Paper was my agent saying to me, “Now, when people want to be a playwright, I can tell them to read this book.”

‘I wanted to say in it, “Look, if you if you take this job remotely seriously, it’s going to involve this amount of difficulty.” But I think another volume might just turn into a showbiz anecdote book and Rupert Everett does those better than anyone else, so why would I compete?”

■ Peter Gynt is at the National Theatre until October 8, nationaltheatre.org.uk