AS THEATRE slowly returns to a post-Covid world, one of the many issues it is facing is how do actors do their job while abiding by social distancing guidelines? After all, when performers have to remain at least one to two metres apart at all times, it can be difficult to conjure the intimacy that is often required between characters.

This, however, is not a problem for Stephen Tompkinson and Jessica Johnson, the stars of the 40th anniversary production of Educating Rita, which is resuming at the open-air Minack Theatre in Cornwall next week.

That’s because, since working together on the play, the pair have become romantic partners — and given they are a household ‘bubble’ already, living together in Whitley Bay, that means they can get as close to each other on stage as they like. ‘It’s very fortunate for us and is obviously one of the reasons we have been able to get the show back on again so quickly as well,’ says Jessica.

Their take on Willy Russell’s classic two-hander, about a forthright Liverpudlian hairdresser-cum-mature-student and her embittered English professor, originally premiered last year, and was mid-way through its second UK tour when theatres closed in March. 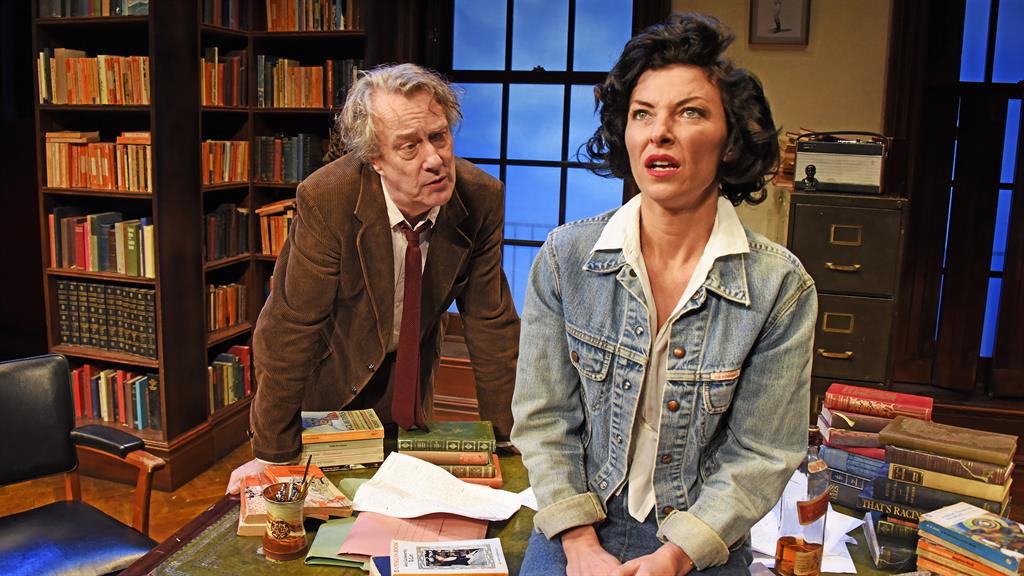 Since then, Jessica has been home-schooling her youngest son Charlie, among other things, while Stephen has been keeping busy with voiceover work and recording a Radio 4 comedy-drama. Now, they are back to running lines, and are raring to go. ‘You never know when you’ll get these opportunities again to work together, so we’re grasping it with both hands,’ says Stephen.

Though they don’t have to worry about distancing, they are having to modify the play in other ways, with a pared-back set and ten to 15 minutes sliced off the running time, so to avoid needing an interval, which would create audience congestion.

Jessica sees the script edits as a blessing in disguise. ‘Being forced to make these cuts has actually really reinvigorated us. I like a change — it stirs things up a bit.’

But are they worried about battling with the elements outdoors? ‘I just think it’s a brilliant adventure, and we’re all going to go with it and hope for the best. I don’t know what it’s going to do for my hair — it might be a bit blustery — but we’ll have to wait and see,’ she laughs.

The Minack — a spectacular, classical-style amphitheatre on a clifftop near Penzance — is an unusual setting for Russell’s down-to-earth comedy drama, set within the confines of a dusty, book-filled university office. However, Jessica thinks that it will only enhance the power of the play’s celebrated repartee between the idealistic Rita and the misanthropic Frank. ‘The play is just about these two people, over the course of an academic year. It’s pure storytelling and I think the Minack is all about that.’

The success of any version of Educating Rita depends on the connection between its two protagonists. Julie Walters and Michael Caine were electric playing off each other in the classic 1983 film, and reviews have pointed out that Stephen and Jessica have similarly potent chemistry, which is not always a given when real-life partners act together.

The pair first met while working on different shows at Newcastle’s Live Theatre. Jessica had recently played Rita in another production at Durham’s Gala Theatre, and suggested to Stephen that he would make a great Frank — and so Stephen took the idea to leading producer David Pugh.

Stephen may be the bigger name, but he sees Jessica as the real star of the show. ‘When the film came out, people were not that familiar with Julie Walters and she had an immediate impact. Jess has that same effect on the audience, and it’s great. It’s just great watching and working with her, and we’ve certainly grown the longer we’ve performed it, which gives it a new energy.’

For both of them, the joy of returning to the stage is tempered by their concerns for their industry, not least in the regions. ‘My worry is that the [distribution of the arts rescue package] will be very London-centric,’ says Stephen.

‘One thing that you learn when you go on tour is how important theatres are for each particular community. They need to be supported equally.’

Still, Jessica remains optimistic in the longer term: ‘The industry is full of such creative people that if there is a solution, we’re going to find it. We’ve survived the blitz and we’ve survived Oliver Cromwell [shutting down the theatres], so we’ll get through it and we’ll figure it out.’

■ Educating Rita is at the Minack Theatre from August 18-30, minack.com