RELEASING a new album is an exciting time for any artist, and Brian Fallon had big plans for a tour of the UK to support his new record, Local Honey. Of course, then Covid-19 happened, and all live gigs, tours and festivals were cancelled.

But the tour has now been rescheduled to January next year, and it’s fair to say the American singer-songwriter is looking forward to playing here. ‘I love the UK, there’s so many genuine music fans. It doesn’t matter if fans know the artist or not, they will still give attention even if it’s for a minute. The kids here, I mean, it’s the adults too, but if they like something, they really like it. You see that football enthusiasm; you don’t see that in the States.’

You might recognise former Gaslight Anthem frontman Brian from the Glastonbury highlights, where he could be seen performing with Bruce Springsteen — someone he has memories of seeing in concert himself. ‘I’m from New Jersey and when you go to see Bruce Springsteen you hear everyone shouting, “Bruce”, but it sounds like “boooo” so you think everyone is heckling him,’ Brian laughs. ‘The first time I went I thought there was going to be a riot. He’d just played Dancing In The Dark or some hit that even your grandmother knows and here they are booing him.

‘Then I realised what they were saying, and it made a lot of sense.’

Brian admits he’s incredibly proud of Local Honey and that it was something he took a while crafting. He says: ‘It took a long time to make the record, it’s the first time I’ve had the confidence to make a record that’s all about the stories and the songs.

‘It’s not about trying to win over anybody with smoke and mirrors. It’s a record to listen to on headphones. It’s about being in the present moment, in your daily life rather than the grand things.’

We’ve all had a lot more time to focus on the little things in life due to lockdown, so it’s perhaps a desire most people can understand. 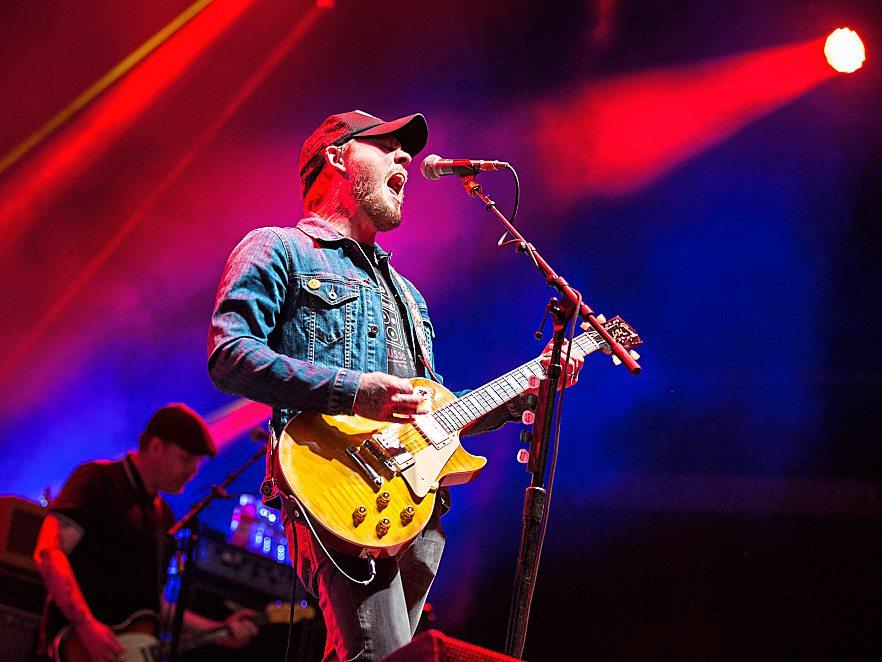 Brian is now 40 and says there has been a natural progression in his songwriting and performances. He explains: ‘I’m growing up and taking on responsibilities. I used to be a punk rocker in a punk rock band and now I’m two people’s dad! Sometimes my back hurts and I don’t want to jump offstage… I might pull something. But I’m happy where I am right now.

‘If I was still writing about high school and girlfriends, I’d be in double trouble — my wife would be mad and my audience would think it’s lame.’

In the run up to making Local Honey, Brian split from his previous record label. ‘I was on a major label for so long. I went to them and asked if I could leave. At this point in time, I’m not pretending to be the next young pop star,’ he shrugs. ‘Big labels want to make money and have expectations, and they were cool with it. I didn’t want to worry what was on the radio.

‘You have to decide every little thing — like what kind of paper is the vinyl printed on. Nose to tail, this is mine. I’ve done this. It’s more work but it’s more reward, too.’

While shows are cancelled, Brian has been keeping busy with Sittin’ Round At Home, a series on Instagram where he speaks to other musicians about their songwriting process and life in general. He’s considering launching a podcast and says he’s getting his head back into making new music.

What should we expect from his rearranged shows? ‘Sometimes it’s a show with a lot of music and a lot of songs, and sometimes it’s a show where I will literally stop and tell you stories’, he says. ‘The whole crowd will be laughing and you’re not sure whether I’m a stand-up comedian or if this is a music show. Other times, I’ll make you cry non-stop for an hour.’

■ Brian plays Live From Home on Saturday from 8pm, brianfallon.net