EBENEZER SCROOGE may be one of literature’s most unlikable men, but actor Paterson Joseph says that as he gets older, he sympathises with Charles Dickens’s infamous character more and more.

‘As a young person, you just think, “what a horrible old man” but now, as an older man myself, I think how cruel this night he experiences is, because if we were all made to look at the consequences of our actions like he is, we would be broken by it.’

It’s lucky that Paterson can feel compassion for Scrooge these days, given he is the latest actor to play him on the West End stage: he is taking over the role in Jack Thorne’s hit adaptation, which has returned to the Old Vic for its third year running.

Perhaps the greatest genius of Dickens’s festive morality tale, about a miser receiving his comeuppance, is that it feels both timeless and acutely relevant. After all, as Paterson notes, the character resonates in an era when ‘CEOs are getting overpaid and receiving bonuses they shouldn’t get, while their employees aren’t being paid that well’. He hopes some of these modern-day Scrooges will be among the play’s audience.

‘I think sometimes in the theatre we preach to the converted. But I always hope there might be one person who is properly affected by what they see.’

Scrooge is a plum role but for a black actor it has extra special significance, Paterson says, because period drama as a genre has often been biased against BAME performers. Paterson recounts meeting a famous British film director while starring in Ibsen’s A Doll’s House 20 years ago and says the director was shocked by his casting because, ‘He said there wouldn’t be any black people in Norway at the end of the 19th century.

‘I was slightly enraged by that,’ Paterson says, ‘because I thought, “This is a man who purports to do films that are real, and you’ve just made a sweeping statement based on what you consider to be reality — but you don’t know”.’

Generally, he feels attitudes to casting have been more progressive in recent years. He was heartened when he was mooted as favourite to take over as Doctor Who from David Tennant. In the end, the role went to Matt Smith but he enjoyed the media circus, he says, ‘Because no one said, “You can’t have a black doctor”. Now we have a woman playing the role and life has just gone on.’

And if Jodie Whittaker moves on, he would still be keen on the part. ‘I was a little more reluctant then, than I would be now.’

Paterson’s path into acting was a challenging one: he was a desperately shy kid who, in an early audition for the National Youth Theatre, could barely look at the interviewer when they spoke to him. He didn’t make the cut and it was only later that he decided to pursue performing, having trained as a chef.

It hasn’t just been a career for him over the years but a vocation that has transformed his whole life and even his personality.

‘The gift acting has given me is the ability to know that if you’ve got something to say, and you really want to say it, people will listen,’ he says.

For all the weighty stage and TV roles he’s played, Paterson is perhaps best loved for one of his rare comedy outings: as super-suave boss Alan Johnson (below) in the Channel 4 classic Peep Show. When he accepted the role, he never imagined what a cult phenomenon it would become. ‘I’d never done any comedy before, really, and I just thought, “God, Channel 4 are experimenting, aren’t they?” Some of the humour was so cruel and weird. I loved it but at the beginning, I was at a bit of a loss as to what it was.’

Despite the show ending in 2015, fans still come up to him and ‘kindly quote Johnson lines at me because I can’t remember most of them,’ he says. 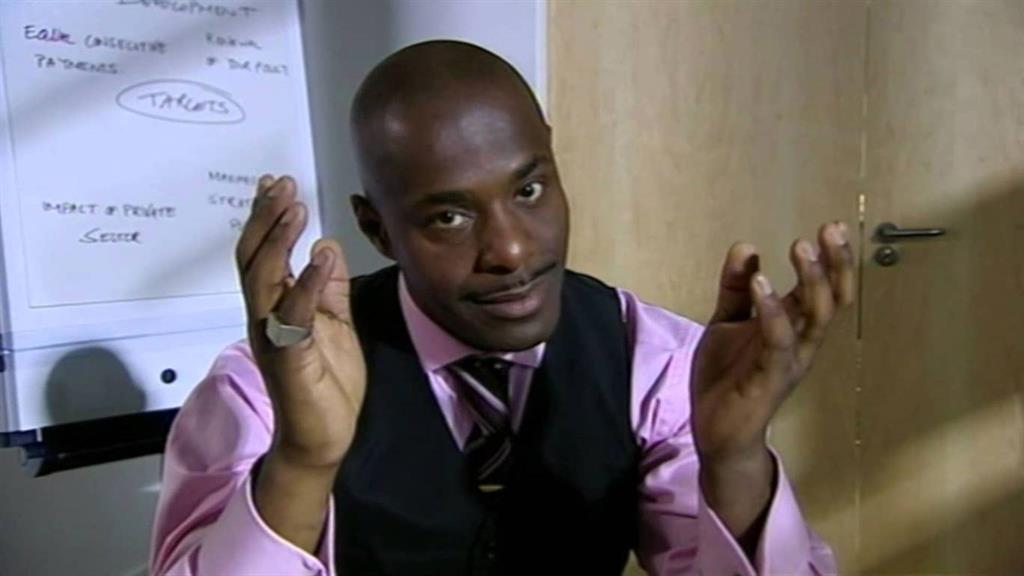 Paterson will soon be seen in the BBC’s adaptation of Malorie Blackman’s seminal YA novel Noughts + Crosses, playing the politician father of the story’s heroine. But before then, there’s Christmas to get through, both on and off stage. He’s certainly not a Scrooge himself when it comes to the festive season, though he’s happy to admit to being a bit of a shirker.

‘The family have all decided that they’re coming round to mine for Christmas lunch but I’ve done the actor’s thing of going, “I’m doing theatre, so that obviously means I can’t do anything”,’ he laughs. ‘So, I’m making rice and peas and they’ll do Caribbean chicken and all the rest.’