THE play is about a man with a big nose but by act three it’s moved on and it is about something else,’ says X-Men star James McAvoy, of his title role in Cyrano de Bergerac, at London’s Playhouse Theatre.

This production by Jamie Lloyd, which is broadcast live to cinemas on Thursday, is certainly a departure from previous versions. Freely adapted by Martin Crimp, the play is in verse, with actors in modern dress occasionally lining up across the stage and reciting their lines into handheld microphones, in a set up which explicitly references rap battles. Cyrano’s own physicality is also approached differently as it breaks with tradition by dispensing with the famous prosthetic hooter.

‘Jamie said we weren’t using a nose and I’ve always trusted him in the past,’ says James, who has previously worked with the director on plays including The Ruling Class and Macbeth. ‘If you’re doing a big war scene in a movie you can be meticulous and have people’s guts coming out and make it so real it’s uncomfortable to watch. We can’tdo that in theatre. Jamie’s point is, let’s not even f***ing try. 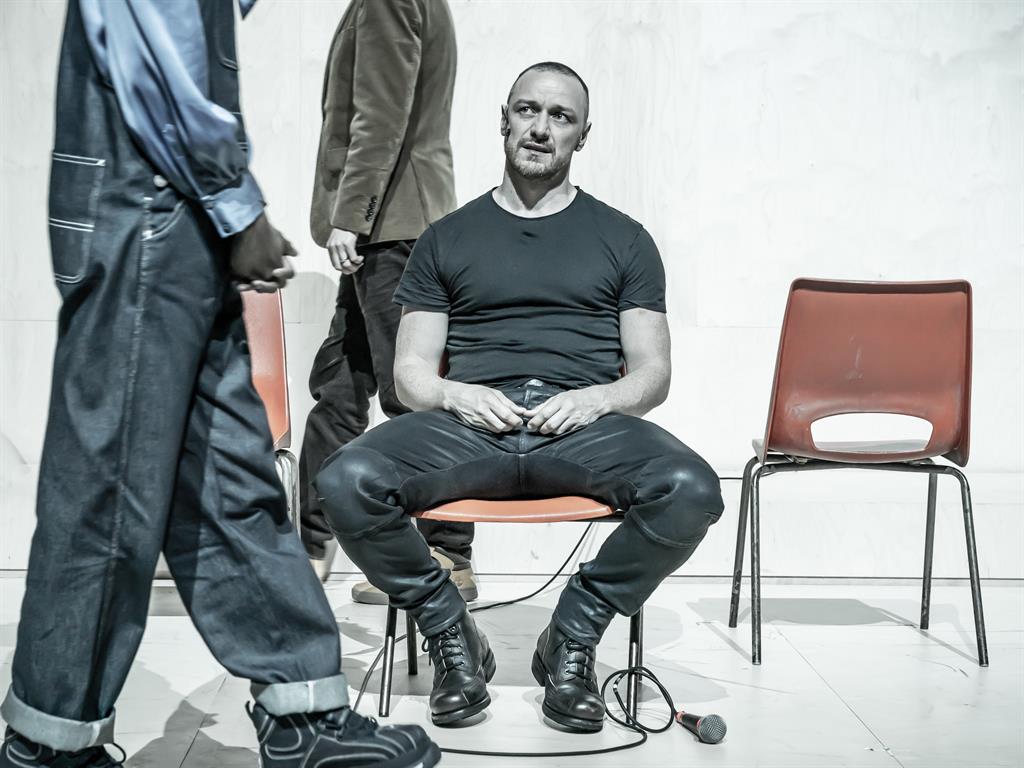 ‘In the war scene, we turn out all the lights and you just hear our voices, and people in the audience have had a visceral reaction. We don’t even act it realistically — we’re just speaking the words.’

Moving away from trying to create something realistic can help get to the truth of the matter, James tells us.

‘Prosthetic noses always look crap, so why bother? The play isn’t just about him having a big nose but the fact he thinks he’s ugly. So why don’t we just get the audience to imagine a nose? Which will probably be better than anything we could have stuck on my face. The play is also about the disfigurements Roxane and Christian go through in life as much as Cyrano’s issues. Taking away the nose frees that up.’

For those unfamiliar with Edmond Rostand’s 1897 play, the story centres on an unusual love triangle. Cyrano is in love with Roxane but his self-consciousness about his nose prevents him from pursuing her. Instead, his pal Christian uses Cyrano’s expert poetry skills to win her heart for himself.

‘There are also issues at the heart of it about objectification that make it quite current,’ says James. ‘And that’s not just to do with Cyrano but also Roxane and Christian and how they’re objectified for their beauty. As a result, all three are incredibly lonely. It resonates today with how obsessed we are with the visual and the distribution of the visual on social media.’

James himself is not given to expressing his political views on social media.

‘My job is to go on stage and get the audience involved in the story. The more you put your political views out there, the harder that becomes. You don’t want the audience thinking, “Here’s that guy who really loves Roxane but she doesn’t know and he voted this way at the last election…”’ James has also avoided becoming objectified himself — perhaps surprising after his physical transformation in M Night Shyamalan’s films Split and Glass, where he was required to put on a large amount of muscle.

‘The only thing I noticed in terms of appearance, and for Cyrano as well, was the reaction to shaving my head… people are a little bit less friendly.

‘If I do a bit of bad driving and a van driver starts to shout and bawl, they then look at me and think better of it. Just because I’ve shaved my head. I think, “Really, is that it?”’ James has received glowing reviews for his performance in the play and has thoroughly enjoyed the run.

‘It’s a stonking role to play — you have a real work out on your hands as an actor and you’re able to make the audience laugh and cry, you can shock and horrify them. I get to use most of the stuff in my tool kit.

‘You can get all the five-star reviews in the world but if the audience aren’t laughing or crying or standing there cheering at the end thanking you for a good night at the theatre, then it doesn’t matter. That’s the most important thing.’

■ Only a few tickets remain for the run at the Playhouse, but you can see it at cinemas around the UK on Thursday via NT Live, ntlive.nationaltheatre.org.uk