ALEXEI SAYLE might have been in the comedy business for 40 years, but he’s not lost any of his flair for contemporary analysis. His take that ‘austerity is the idea that the 2008 financial crash was caused by Wolverhampton having too many libraries’ has been spreading like wildfire on social media. Maybe that’s because, as he claims, there’s a surprising shortage of anti-establishment comedians.

‘There’s a gap in the market. Even if they didn’t believe in it, you’d expect someone to do it, just for the money, ‘ he says. ‘There were loads of left-wing comedians in the 1980s. Where are the new Ben Eltons now?’

His new Radio 4 show, Alexei Sayle’s Imaginary Sandwich Bar, in which the Wolverhampton library gag first appeared, is the Liverpool comedian on his usual erudite, and angry, form. As is evident from the show, he’s become a passionate advocate for Jeremy Corbyn and the grassroots movement he has created. ‘When people sneer at Jeremy Corbyn it drives me nuts,’ Alexei says. ‘To hear him being called a racist by racists, it’s beyond belief. And yet I have friends who are taken in by this s**t.

‘I hear him talk and it makes sense, then it gets deliberately misrepresented by people who have something to gain from that, people who are very much part of the establishment.’

Alexei grew up in Liverpool. His mum, Molly, was a pools clerk from a Lithuanian-Jewish family, and his dad, Joseph, was a railway guard. Both were members of the Communist Party. But, while always political, he was keen from a young age to find his own voice. ‘I don’t have a crystal ball, but I think things are changing,’ he says. ‘Voters are seeing through the politicians who claim to have moderate views, but actually what they’re saying is really quite extreme.

‘For a long time the politicians from all parties were all fighting over the votes in the middle. Politics went from strongly right wing to mildly left wing and there were lots of voices that didn’t get heard at all, loads of people who didn’t vote.

‘You had all these modern, careerist MPs who were almost indistinguishable from each other. But austerity has disproportionately affected young people and other groups who felt there was no one to speak for them. There are new people registering to vote all the time. Maybe they have more hope now.’

So is Alexei more hopeful, too? ‘Yes,’ he, says, before pausing. ‘Maybe. More so lately. Suddenly, from nowhere, they have a genuinely left-wing leader and new voices who are vocally opposing austerity as the political ideal it is.

‘It was never a necessity to force terminally ill people to look for jobs or to close libraries. That was a series of political decisions that didn’t really save any money anyway. Now we have a leader who will speak up.’

As well as his new radio show, there’s an unexpected return to Alexei’s first love, stand-up, with a handful of live dates — two work-in-progress shows and a headline gig at Southport Comedy Festival — a brief trip to the town just up the coast from his home city. It’s where he went to study art after ‘being kicked out of school’.

‘I do live stand-up so infrequently these days, but it’s something I do enjoy,’ he says. ‘Although I never know quite how to balance it. Do people want to hear stuff they might have heard me say on the radio, or do they want something totally new?

‘It takes a couple of years to come up with a whole new show, and then you do the warm-ups and then it’s over. But I’d like to do a proper tour again. It’s just finding the time.’

Alexei’s not giving much away about the show, but he’s clear that it is about more than just politics, with his anarchic style given deliciously absurd free rein. Many of the jokes are at his own expense. He describes himself as a ‘wild-eyed fanatic on the left’, but he’s clear that it can’t be all about politics. ‘It took me years to accept that not everybody wanted to spend a rare night out being shouted at,’ he concedes.

Even the angriest of young men mellow, and while Alexei’s new show retains the white heat he unleashed in the early days, it also has its softer moments, too.

‘There’s a lot of just general life stuff, talking about health and what it’s like to be 67,’ he says. ‘It’s not a miserable show. I’m not miserable about being 67. I’m quite grateful, really.’ 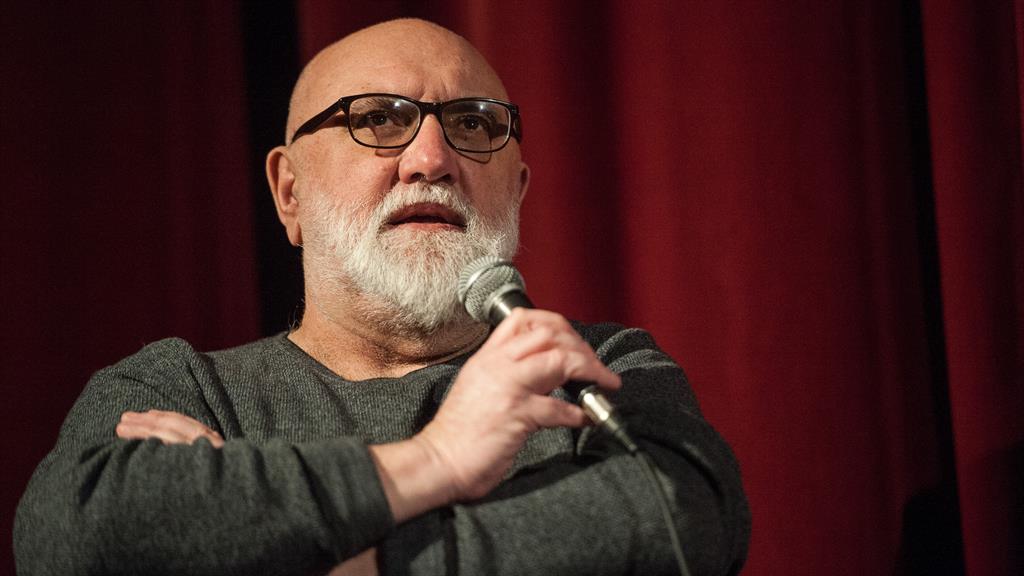 ‘If sitcoms were easy to write, there’d be a lot of good ones, and there aren’t’

‘They have a lot of different words than us… they say “elevator”, we say “lift”; they say “drapes”, we say “curtains”; they say “president”, we say “seriously deranged git”’

‘I’ve given up asking rhetorical questions. What’s the point?’

■ Alexei is trying out his latest material at Bloomsbury’s Museum of Comedy, museumofcomedy.com, on Oct 8 and 9, before Southport Comedy Festival on Oct 13, southportcomedyfestival.com