THIRTEEN years after his comedy debut, Simon Brodkin, 42, is ready to embark on his first stand-up tour as himself — leaving his comedy alter ego Lee Nelson behind. ‘I’ve been in character since I first stepped on stage,’ he says. ‘This is me doing stand-up and talking about my life and things that are truthful — such as being a dad. Now I’m opening up, but I don’t find it easy, which is why I probably did the characters to begin with. The show is called 100% Simon Brodkin and it’s just me with no gimmicks and no hiding.’

Was he hiding? ‘Directly or indirectly, knowingly or not. But I wasn’t having a ‘‘Simon Brodkin meets a psychiatrist and can only do comedy in character’’ situation. There wasn’t some big psychological moment of me saying, ‘‘I just want to be me!’’ It just felt like a natural next step.’

Simon made his debut at the 2006 Edinburgh Festival with his Everyone But Himself show — presenting characters including an incompetent doctor (he swapped a career as a doctor for comedy), millionaire footballer Jason Bent and his best known creation, cheeky chappy Lee Nelson.

His last tour, Lee Nelson, Serious Joker, lasted two years and was extended after he performed one of his famous stunts at the 2017 Conservative Party conference, where he gave Theresa May a P45.

He adds: ‘There was an appetite for more Lee. The last tour was 180 dates. There isn’t one direct reason why I’ve changed how I do stand-up. I just wanted to try being more open.

‘It is more revealing and vulnerable which I didn’t feel ready to do in the past,’ he says.

‘It would have been near on impossible,’ he says. ‘With Lee, no matter how spot on the joke was, there was no honesty as the whole thing is predicated on it being a fictional set-up. 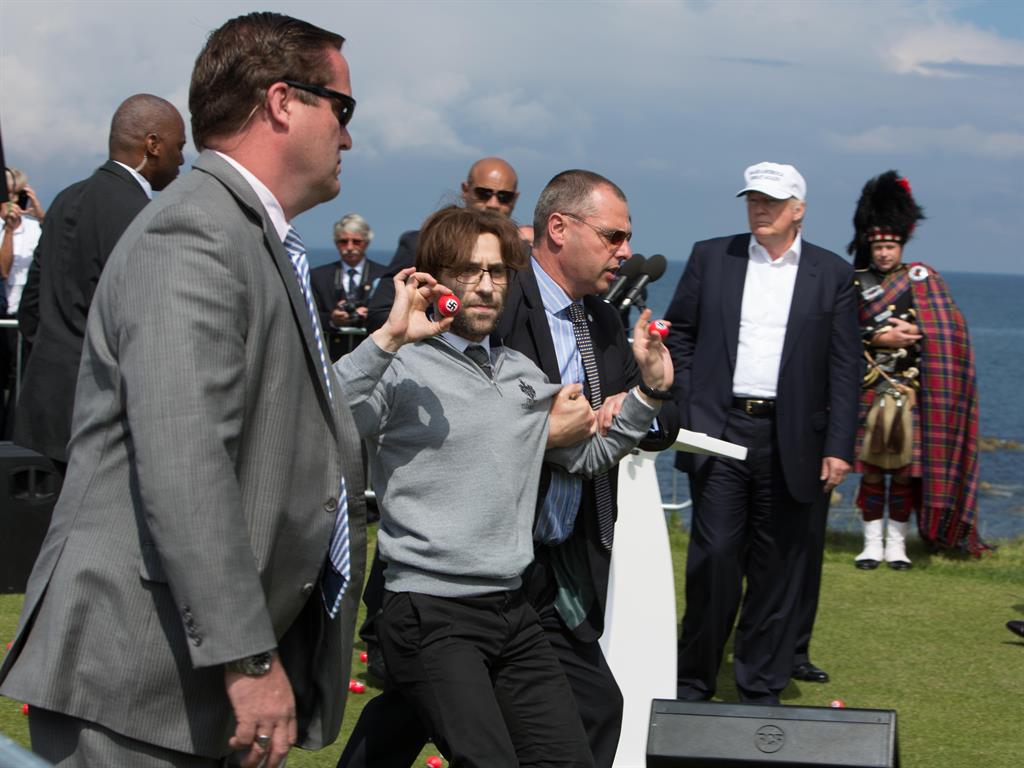 ‘That can be very funny and I’m a massive fan of character comedy but I wanted this tour to be about real things that I care about, such as anti-Semitism.

‘I couldn’t have done more than a fleeting line about that as Lee but with this show it comes out of the Donald Trump stunt.’

Said stunt was in 2016 at the re-opening of Trump’s Turnberry golf course in Scotland, when Simon dumped swastika-emblazoned golf balls over the ground, just as Trump was about to give a speech. It led to him receiving online abuse from the Ku Klux Klan.

‘There is abuse out there particularly aimed at comedians and people in the public eye — but this was a different level as it was visceral hatred directed at me by people with abhorrent views based on the fact I’m Jewish. It was racial hatred. It’s a different category to people saying, ‘‘You’re as funny as cancer mate.’’ With this show I can talk about anti- Semitism being on the rise and turn real-life stuff I care about into funny.’

But his current material has also led to some online showdowns.

‘A Corbyn supporter saw a warm-up gig before the Edinburgh run. The hate I got from her and the far-left crew on Twitter afterwards was really quite breathtaking.

‘People get angry about stuff they don’t agree with and that happens even more when it’s in comedy form. There were chants of ‘‘scum, scum, scum’’ when I was marched out of the Tory party conference,’ he reminisces. ‘I thought, ‘‘You’ve done well for yourself, I’m proud of you Simon.”’

Despite his more confessional tone and political references he says his new material isn’t a million miles away from his previous sell-out tours.

‘It’s still all about whether I’m going to make people laugh — that’s still the fundamental currency I’m dealing with. Making a show that is meaningful and a bit more engaging feels right to me at the moment.

‘But fans of Lee and the stunts will still be laughing away. This isn’t something where I put a pair of glasses on and be all serious — it’s still very funny but truthful and personal.’