EVERYONE loves a cliffhanger, don’t they? That’s certainly the hope of indie rockers Circa Waves, who have released their fourth studio album, Sad Happy, in two parts. The second of those halves, Sad, comes out today, while fans have been cheerfully downloading Happy since mid-January.

Singer Kieran Shudall says the idea was all down to guitarist Joe Falconer. ‘He has an obsession with the TV show 24 and he loves a cliffhanger,’ Kieran laughs. ‘He suggested that we do an album, only release half of it, then have a wait for the other half.

‘We said it was the most brilliant, and also the stupidest, idea he’d ever had, so we did it. Up to now, it’s been pretty fun and it’s the closest we’ll get to being in an episode of 24, which is quite nice.’ Coulrophobics might not be so keen on all the marketing plans for it, however. One of the promo videos has the band dressed as maudlin clowns — and it’s something they now plan to use live.

‘We’ve had so much fun. Music videos for me are an excuse to spend the record label’s money on doing something stupid. I never want to take it too seriously.

‘Someone sent a treatment suggesting clowns in a One Flew Over The Cuckoo’s Nest-style video and we just went with it,’ he shrugs. ‘We’re doing launch parties where everyone will get their face painted as a clown. I’m sure there will be teenagers running through the streets, terrified.’

Sad Happy is the follow-up to 2019’s What’s It Like Over There? and Kieran seems genuinely thrilled by how the first half of the new record has been received so far. ‘It’s been amazing, you never know when it’s your fourth record how it will be,’ he enthuses. 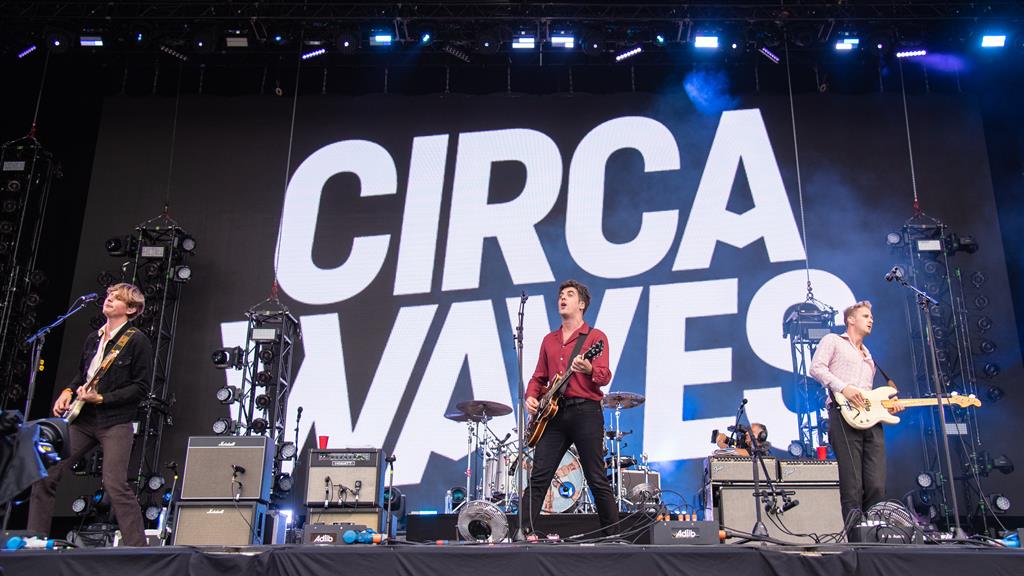 ‘We’ve got more people listening to our music than ever before, sold more gig tickets, more records. It’s really positive; I feel proud and fortunate to be in this position and that our fans have stood by us. It’s actually quite humbling,’ he smiles.

The band are due to play a series of intimate album release shows, ahead of a nationwide tour of some of the bigger stages that they’re used to. Kieran is excited about getting up close and personal.

‘I love these shows. Bands need those foundations before you can play the bigger stages. When you can taste the sweat off the ceiling, that’s what it’s about!’ he laughs.

‘It’s raw, it’s raucous. I love it. It’s the most intimate connection: someone reaches out and you can grab their hand while you do a certain lyric. It’s about human contact and it reminds me why I got into a band in the first place.’

Circa Waves have rapidly become a festival favourite, too, and their high-octane live show, featuring sing-along songs with huge choruses such as T-Shirt Weather is just a small part of the reason why.

‘We pride ourselves on playing every show as if it’s our last,’ says Kieran. ‘We don’t stand around looking miserable. We jump around, our fingers bleed from playing so hard. It will be one of the best live experiences you have. It’s visceral.’