OVER the course of her career, Caroline Quentin has moved through various stages of typecasting: first came the bolshie girlfriend parts, then the working mums. But her current chapter is the most delicious of all: ‘I’m in my mad aristocracy phase,’ she tells me with glee. ‘It’s great. I get to wear all the pretty frocks now. If I don’t get to play a royal soon, there’s something very wrong.’

Her latest role may be her maddest yet: the grotesquely vain Lady Fanciful in a new Royal Shakespeare Company production of John Vanbrugh’s 17th-century romp The Provoked Wife in Stratford-upon-Avon. The play is a hilariously irreverent study of the trials of marriage, centred on the crumbling relationship of Sir John and Lady Brute. Lady Fanciful is their conniving neighbour, who believes she is supremely beautiful and will stop at nothing to bag the man in her sights.

Speaking to Caroline during rehearsals, it’s clear she’s preparing to have an absolute ball. ‘It’s so nice to think I don’t have to apply any of the normal rules of good manners on stage, because this woman is the centre of her universe. It’s very liberating, as I approach my sixties, to go “actually, f**k it, I’ll just take centre stage”.’ 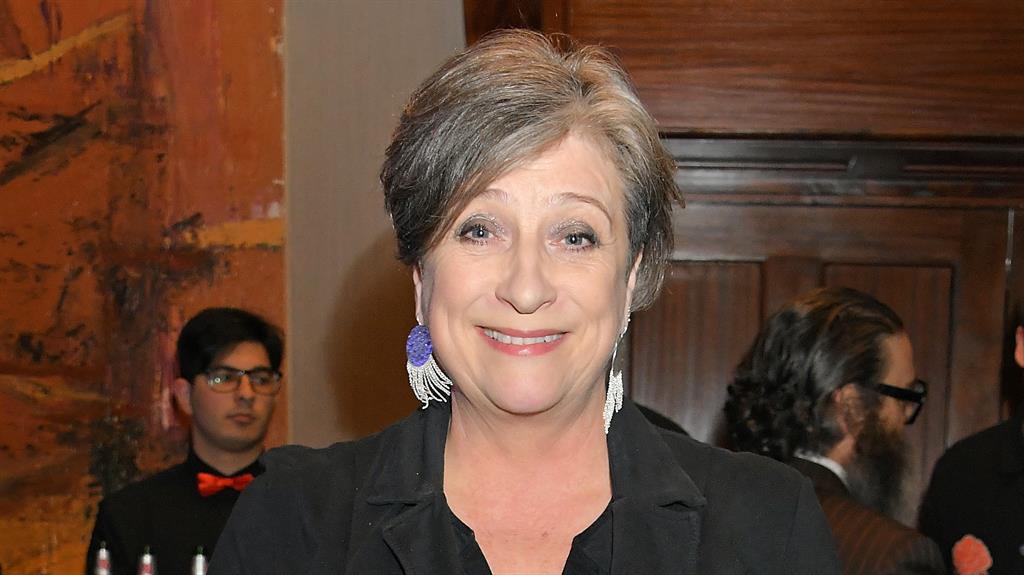 The Provoked Wife’s high farcical style also plays to Caroline’s strengths as an old-fashioned entertainer. She started as an ‘end-of-the pier dancer with summer seasons and pantos,’ she explains. When concentrating on acting properly, she made sure to mix things up, combining classical and contemporary theatre with Comedy Store improv. She says she loves ‘to find the comedy in plays that other people don’t see. Generally speaking, life is a black comedy and good writers find that all the time.’

As accomplished as her stage career has been, it was TV that made her famous, in the mid-1990s. As Men Behaving Badly’s Dorothy, the long-suffering partner of Martin Clunes’ laddish Gary, she became one of the small screen’s most recognisable faces.

But that had its downsides: thanks also to her first marriage to comedian Paul Merton, she became the subject of tabloid scrutiny — which continued through the early years of her second marriage to Sam Farmer (then a TV runner she had met on the set of Men Behaving Badly) and the birth of her children. ‘It was a hideous low point,’ she says. ‘I felt victimised, chased, hounded. It did irreparable damage to me as a human being.’

She and Martin have stayed friends ever since, as well as fellow residents of England’s South West — she lives in Devon, he in Dorset. Having played an eccentric vet in his ITV vehicle Doc Martin a few years ago, she’ll be filming a new series alongside him in Cornwall this summer.

Could Men Behaving Badly ever return? She thinks it’s unlikely at this stage, though she and Martin have inadvertently kept the dream alive. ‘When we go shopping in Dorset, people see us in the deli or something and it’s like Dorothy and Gary are still together. It completely freaks people out — their faces are a picture!’

It’s hardly like Caroline has time anyway. After some relatively lean years in her mid-forties and early fifties (‘There wasn’t a lot of work around for me. It was a much harder time’) she’s now very much in demand at 58.

Aside from The Provoked Wife, she’s in talks to star in a major West End musical next year, and keeps busy as a TV presenter. BBC2 series The World’s Most Extraordinary Homes has won her a new fanbase: ‘I’m staying in South-West London and kids on the bus say, “I really like your programme…”’

When not working, she enjoys life with Sam on their smallholding outside Tiverton. Unlike the protagonists of The Provoked Wife, they’ve managed to forge a loving relationship. So what’s the secret?

‘The best thing in our armoury is our ability to name things,’ she says. ‘We’re quite good at going: “This is worrying me, I don’t like that, that’s making me unhappy, I’m worried about this child.” It’s that constant vigilance that’s important.’

■ The Provoked Wife is at The Swan Theatre, Stratford-upon-Avon, until September 7, rsc.org.uk