WE’RE not convinced that Kelly Jones understands the meaning of the word break. But after getting off a long tour, and a staggering 22 years in the business, the Stereophonics frontman felt it was time for one.

For most big name musicians, that can mean a couple of years out to recharge the batteries and even longer away from the studio and the demands of songwriting. Not so for Kelly. Just a few months after ‘taking a break’, Stereophonics look set to hit the number one slot in the album charts today with their latest offering, Kind. It has already reached the top spot in the midweek charts.

‘I’ve been doing this for 22 years,’ explains Kelly. ‘You come off of a world tour and you think, “right, what do I do now? Do I go into the studio and start another album or do I step back?” I needed a break. There was no writer’s block or anything, it was much more about just taking time off from music. By November, a load of songs had started coming to me, and you don’t really pick and choose what happens with your songwriting.’

A long break, he explains, wasn’t what he was after, it was refreshment that was needed.

‘Whenever you have a crossroads, you have that chance to move forward and reinvigorate those things that perhaps you felt were a bit jaded about yourself. Sometimes, you blame the thing you love the most. I’ve been doing this since I was 12 years old, this is me more than anything else. It’s all I’ve ever known. I thought the music was the problem, but I realised it was the answer. It was just about changing things around. It’s the best job in the world.’

Assuming Kind makes the top slot today, it will be the band’s seventh number one album, a string of successes that started in 1999 with Performance And Cocktails. 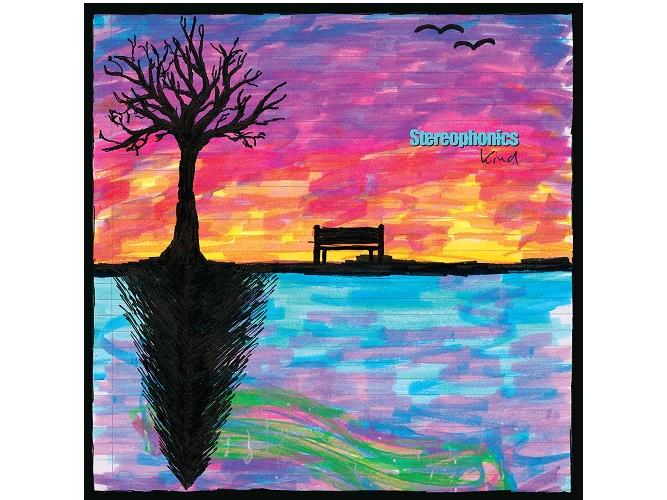 Kelly is keen to stress that the record was designed to flow as an album, rather than a selection of tracks. ‘It’s about the experience of the record. I wanted to make an album that you can listen to from beginning to end. It’s not about individual songs, it’s about setting the mood for 45 minutes.

‘When I sent the songs to the record company, I didn’t give them individual tracks, I sent it to them as one long streamed thing so they had to sit through it!’ he laughs.

The writing and recording was a fast process, with the band spending just 11 days in the studio. ‘We booked 14 days but we finished early! It was a bonus.

‘I didn’t want to write a record full of radio songs. A lot of the lyrics are very personal to me, it’s how I was feeling and going through. It was a very direct and raw experience; we recorded the album spontaneously.’

While personal, Kelly is keen to squash some of the claims made about one of the songs, Fly Like An Eagle, which has been wrongly attributed to being about his eldest daughter.

‘It’s not about Bootsy, I’ve been misquoted before. The song is about someone at a crossroads, wanting to change their life. It stems from the phrase in the song, “dare to be reborn”.

‘It’s about going one way or another way, there’s a possibility it could be really scary, but you could grow and become a better person. It’s about growth, learning, changing,’ he explains.

That doesn’t mean the record hasn’t been a family affair, however. ‘The video is about the relationship between me and my oldest daughter. It’s about her being honest about herself, with me and her sexuality. The video is about our little story.

‘I would never do anything without talking to her. The idea came to mind because any family that’s seen their child being anxious about telling you something… you want to help. The video is about putting the conversation in other people’s homes.’ He pauses to consider his words carefully.

‘I’m not utilising this, I was expressing what’s going on in my life. Everything I’ve ever written has been about my own experience. It’s her life to talk about when she wants to, this is just a piece of art.’

Bootsy designed the front cover artwork for the album, and Kelly couldn’t be prouder. ‘This morning, I took her to Shepherd’s Bush roundabout as there’s a giant billboard of the art that she drew at the end of her physics exam!

‘She had 15 minutes left and drew this picture, she texted it to me and I loved the way the reflection of the tree was different. To me, it represented showing one thing on the outside, compared to how you feel inside. I’m not sure she’d agree with me, though! Her sister, Misty, did some of the artwork for the inside of the album. It’s a family affair.’

Another song that has struck a chord with fans is Make Friends With The Morning. ‘It’s about my mind being very busy the minute I wake up’ says Kelly. ‘It’s about figuring out ways of slowing that down. If I have a creative outlet, I feel a lot more calm and relaxed, and that’s the best version of me. Otherwise, I just spiral around and find problems.’

There’s no real danger there. The band have an ambitious arena toured planned for early next year. ‘The tour is going to be great. We’ve got 22 years of material to choose from. The shows just keep getting longer!’ Put in those requests now.

■ Stereophonics’ Kind tour starts with warm-ups in Liverpool and Leeds on Jan 18 and 19 2020 respectively, stereophonics.com