AS YOU meander through the centre of medieval wool town Chipping Campden, complete with its 400-year-old inns and a church dating back the best part of a millennium, the idea of introducing some thoroughly contemporary architecture is enough to put you off your homemade fudge.

But, like everything else, this small area of the Cotswolds is moving with the times — and with a generation of digital nomads moving out to the country, a new development has been designed to seamlessly mix the traditional with the very modern. 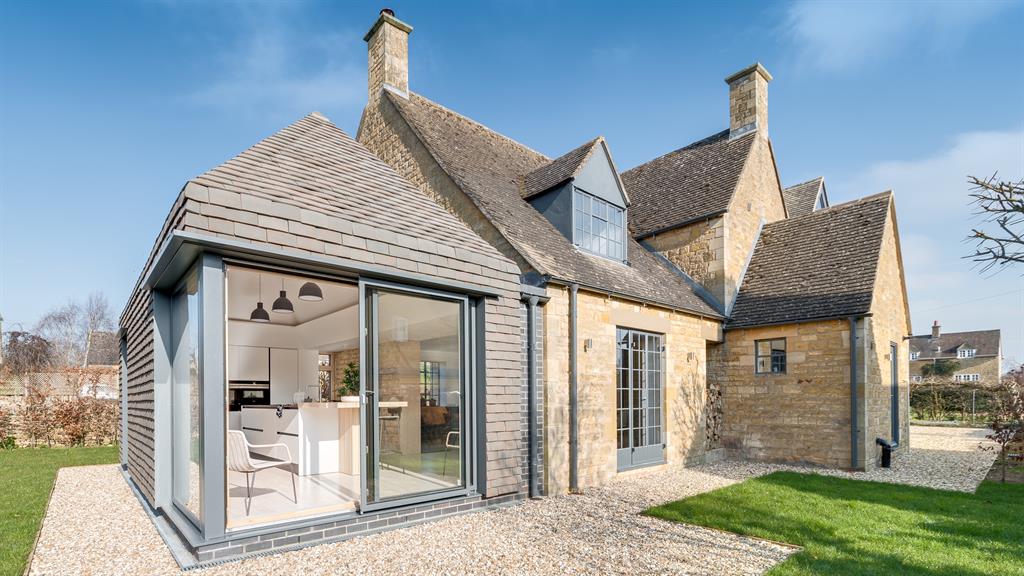 It’s the brainchild of Lydia Robinson and Lawrence Grigg, directors of Design Storey (design-storey.co.uk), an architectural practice based in the Cotswolds. They bought a compact two-bedroom 1950s house — very symmetrical, think the kind of house a child would draw — with the aim of extending it at both sides, doubling the number of bedrooms.

While the idea was not to build a modernist palace, it would arguably be the most forward-thinking house design in what is a very conservative area, Lydia tells us. She explains: ‘There is no contemporary architecture in Chipping Campden and we wanted to make a London house rather than a Cotswolds house. 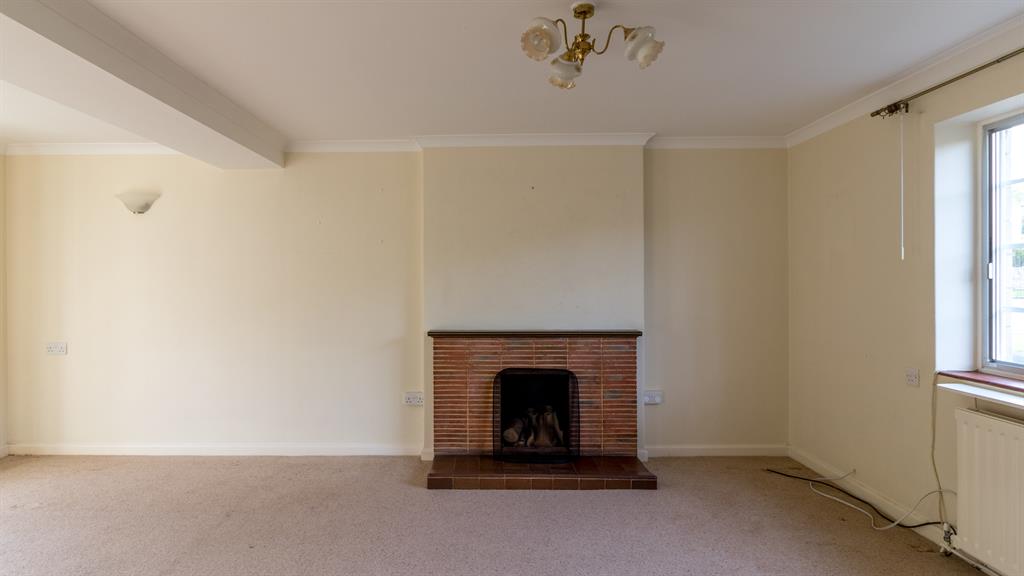 ‘The typical market [in the town] is older downsizers, who want traditional style. We wanted to do something a bit fresh, a bit Scandinavian.The Cotswolds is very conservative, you see lots of creamy AGAs, oak hardwood, and everything has a country twist.’

Armed with the earnings from a property in Bristol they renovated and sold for double their investment last year, they had also recently bought an 18th century forever home, a farmhouse just five miles away with no heating or hot water. They decided to use any profit from this sale for the complicated renovations needed there.

Although the Chipping Campden house was tired — the interior was a wash of beige and magnolia — it had charm and the potential to be substantially enlarged, while preserving its original features.

‘There was nothing fundamentally wrong with it,’ says Lydia. ‘It just lacked sparkle and was dull, but the plot was a quarter of an acre and it was crying out for some vision.’

The demographic in the area was changing too, says Lydia, and the town was attracting the kind of successful creatives who might be swapping Camden for Campden.

She says: ‘We wanted it to appeal to someone who is interested in design, not just wanting a traditional Cotswolds house… perhaps a 40-year-old entrepreneur.

‘The internet is allowing lots of younger people to work from home, and with the area offering good schools and good value compared to London, it is changing. There’s even a funky deli and a trendy coffee shop now.’ 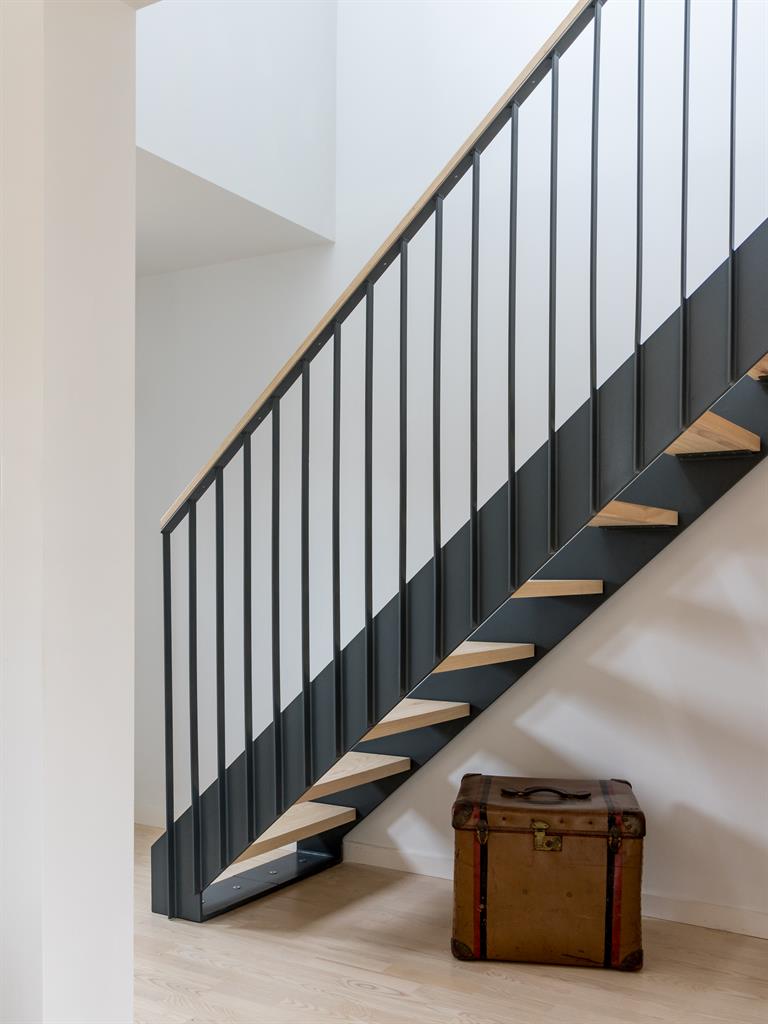 The project took just a year to complete, with Lydia the architect and Lawrence project managing — all while both working on their new home and running the business. The project was also to appear on Channel 4 series Best Laid Plans, under the watchful eye of Charlie Luxton, just to add to the pressure.

The house, which sits on a corner plot, has been extended in three directions and, somewhat unusually, all of these parts extend forward of the principal elevation.

The porch and the two-storey extension (housing a new garage) are, externally, traditional in design and are constructed from local Cotswold stone. The third extension, which is single storey with a simple hipped roof, was conceived as a modern interpretation of the traditional hipped-roof outbuildings found in the area. This tile-clad ‘pavilion’, is almost freestanding, joined to the house by a flat roof connector.

The tiles (below) act as both roof and wall cladding, echoing the local stone-slate which is familiar across the Cotswolds. Working closely with the tile manufacturer, they developed bespoke tiles to allow water to be shed down the walls to a channel drain surrounding the building, eliminating the need for eaves and gutters. 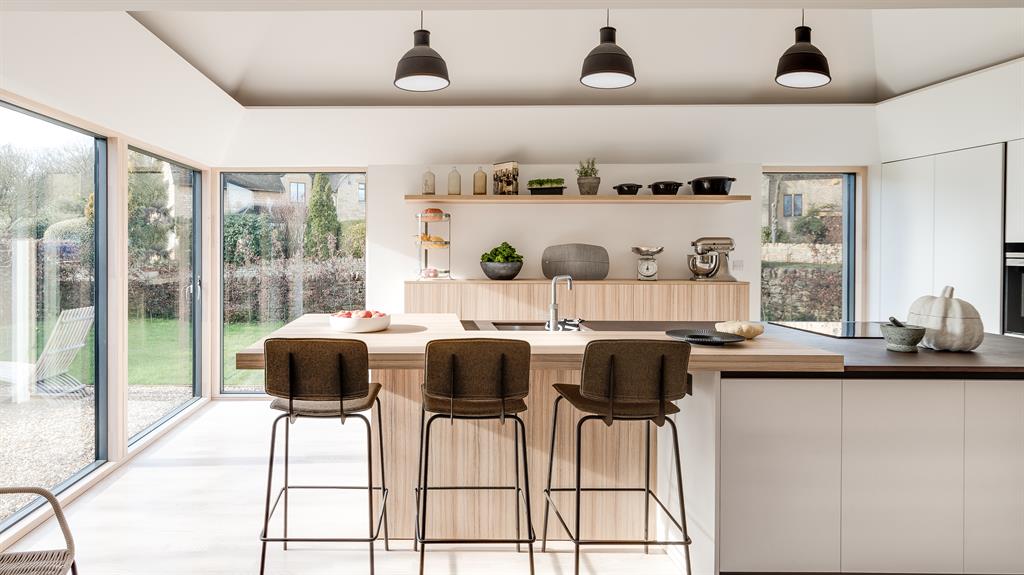 Other innovations include triangular dormers which feature a unique 45-degree casement. Internally, all the new spaces are vaulted and features from the original house, such as the Crittall windows, terracotta tile sills and cork flooring, were retained and recreated. The steel staircase was bespoke to their design, made by a local company off-site, and features ash treads as found throughout the Cotswolds, while the kitchen (above) adjoins the lounge.

Lydia and Lawrence were careful not to overdevelop the property, and to keep it in proportion with the other houses on the street and the size of the plot — yet they still managed to double the living space. 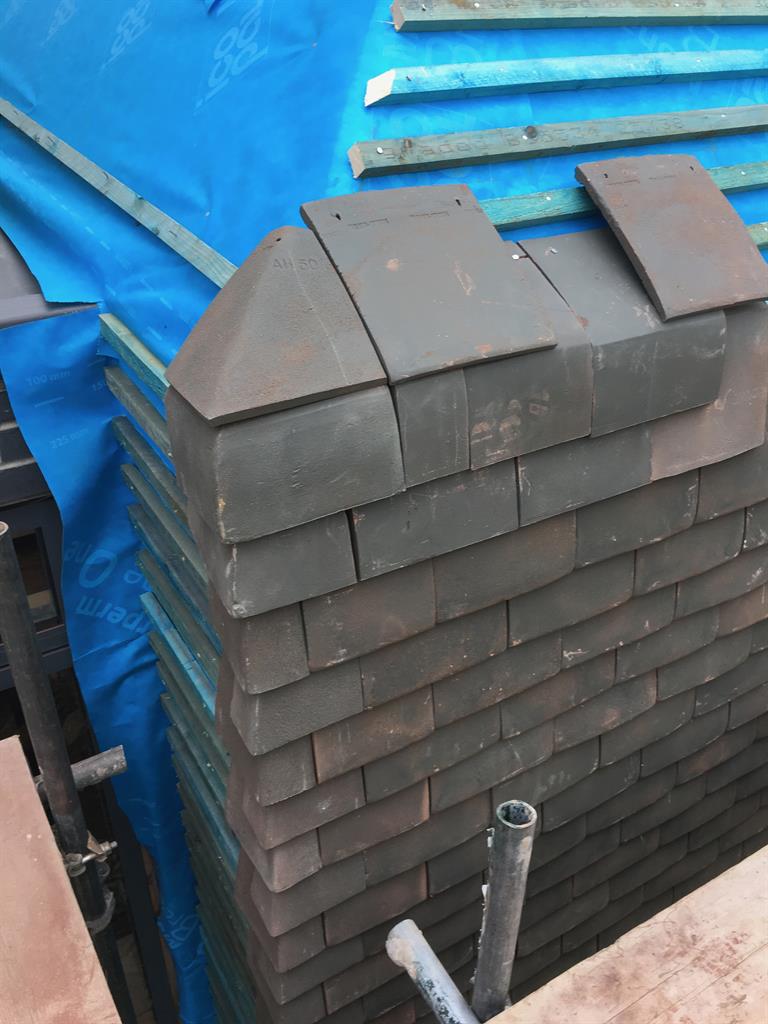 Lydia says that planning is key to an efficient build, and saving time means saving money.

‘You need to have good instinct and stick to that,’ she explains. ‘A lot of people change their minds throughout the construction, usually because they want to start as quickly as possible. But take more time, make sure the planning permission is what you want, and spend more time speaking to the architect and planning.

‘Use the building time for actual building — if you plan it well then it saves time and money.’

Lawrence adds that having the property featured on television was an unexpected incentive to get it finished on time.

‘The deadline of the TV show gave us a very challenging nine-month schedule for completing the build, and there were certainly a few sleepless nights.

‘As pleased as I am with the finished house, it was putting together a great team of people and managing the build with few problems or setbacks that was the most rewarding aspect of the project.’ 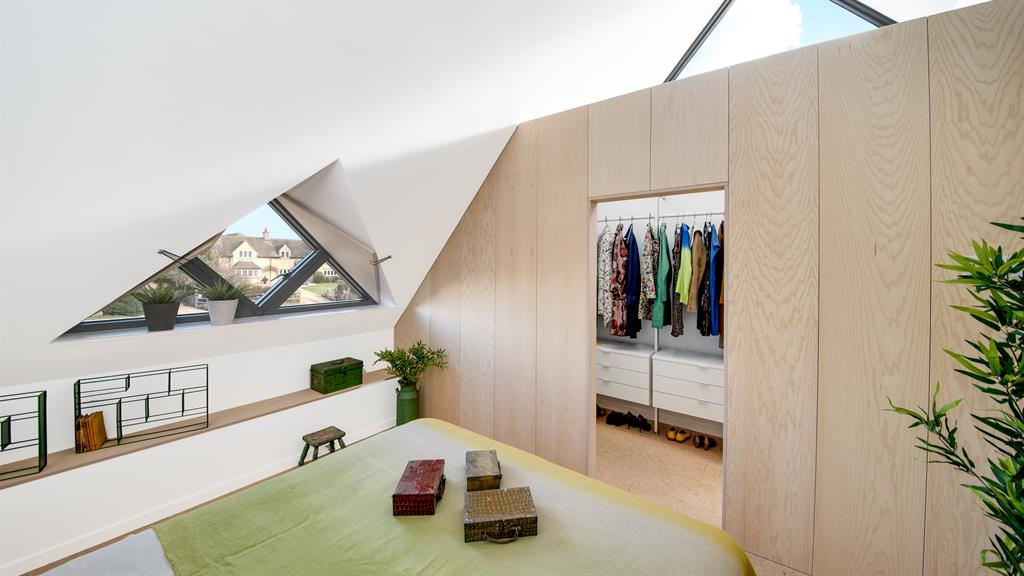 Lydia and Lawrence have turned the property, which they completed three months ago, into a four-bedroom house worth almost twice its original price. Having bought it for £505,000, it is currently listed on the market for £950,000.

A modern interpretation of the classic Arts & Crafts movement it may be, but the neighbours seem to approve nonetheless. ‘The reaction to the house has been positive as we re-interpreted the Arts & Crafts heritage which is close to the hearts of the local people in the town.

‘We were trying to demonstrate that there is a place for contemporary architecture in such a historic place as Chipping Campden — if it is inspired by its surroundings and context.’

Before, during… and after 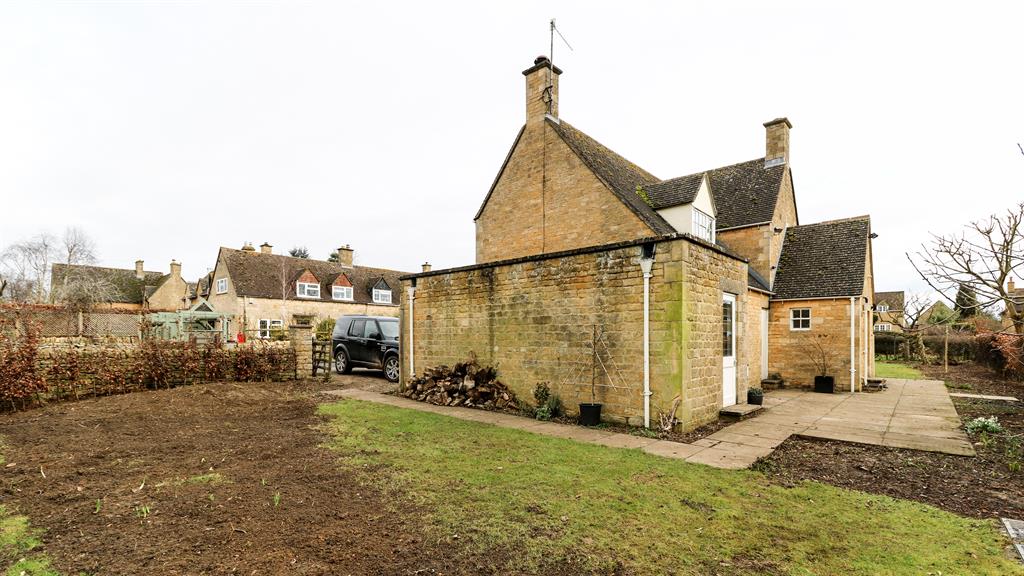 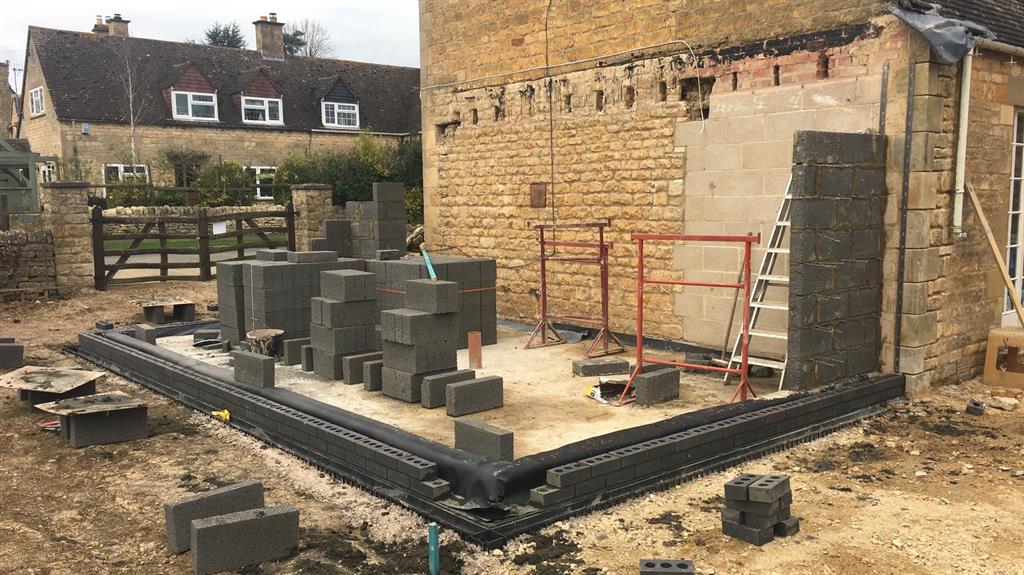