THE 90-minute ceremony on Southsea Common, Portsmouth, featured a series of emotional readings, including from the leaders of Britain, Canada, France and the United States.

■ PRIME minister Theresa May read a letter found in the pocket of Captain Norman Skinner, of the Royal Army Service Corps, written to his wife Gladys and two daughters on June 3, 1944. He landed on Normandy’s Sword Beach on D-Day but was killed the next day. Mrs May, reading from his letter, said:

‘My darling, this is a very difficult letter for me to write. As you know, something may happen at any moment and I cannot tell when you will receive this. I had hoped to be able to see you during last weekend, but it was impossible to get away. And all the things I intended to say must be written. I’m sure that anyone with imagination must dislike the thought of what’s coming. But my fears will be more of being afraid than of what can happen to me.

‘You and I have had some lovely years which now seem to have passed at lightning speed. My thoughts at this moment, in this lovely Saturday afternoon, are with you all now. I can imagine you in the garden, having tea with Janey and Anne, getting ready to put them to bed. Although I would give anything to be back with you, I have not yet had any wish at all to back down from the job we have to do.

‘There is so much that I would like to be able to tell you, nearly all of which you’ve heard many, many times. But just to say that I mean it even more today. I’m sure that I will be with you again soon and for good. Please give my fondest love to my Anne and my Janey. God bless and keep you all safe for me.’

■​ MRS MAY then stood and watched as a telegram was displayed on the giant screen behind her, dated June 14, 1944. An off-stage male narrator read the following unattributed message:

‘Dear Mrs Skinner, It is with the utmost difficulty that I write this letter to offer you my most profound sympathies on the untimely death of your husband. All the time he had been under my command he had done a grand job of work. Should there be any matters of which I can be of assistance please do not hesitate to let me know. Yours very sincerely.’ 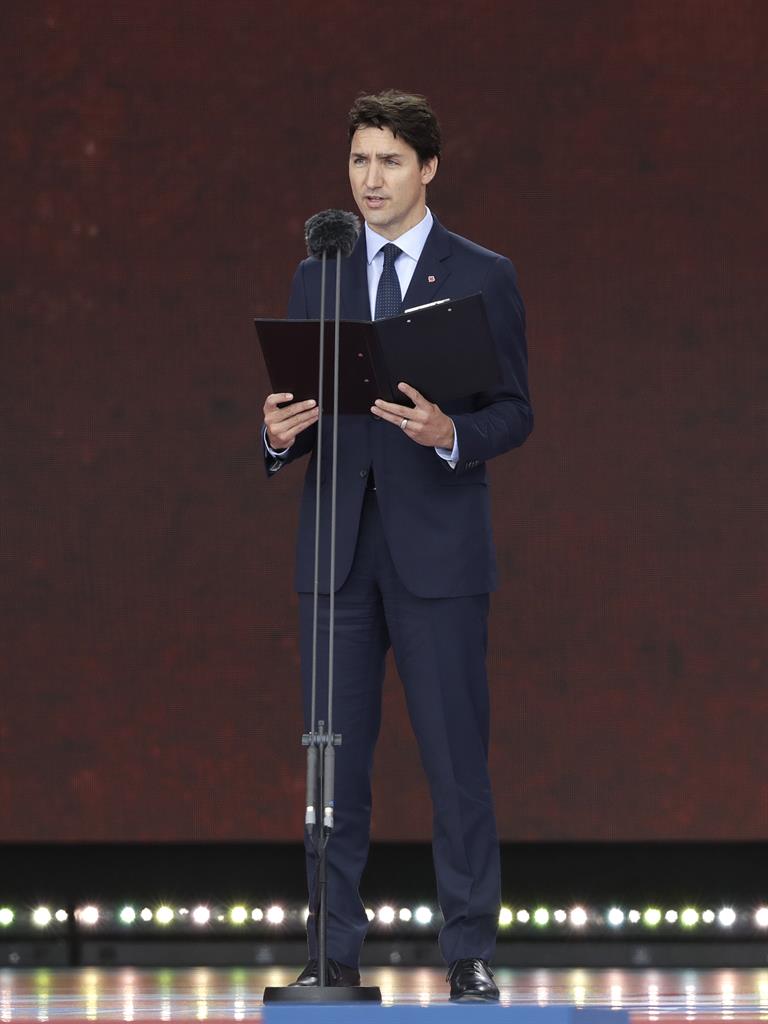 ■​ JUSTIN TRUDEAU read the citation for Lt Col Cecil Merritt, the first Canadian to be awarded the Victoria Cross in the war. He was captured in August 1942 during a raid on Dieppe, which proved vital in the planning for D-Day. Lt Col Merritt died in 2000, aged 91. The Canadian premier read:

‘His unit’s advance had to be made across a bridge which was swept by very heavy machine gun, mortar and artillery fire. The first parties were mostly destroyed and the bridge thickly covered by their bodies. A daring lead was required. Waving his helmet, Lt Col Merritt rushed forward shouting “come on over, there’s nothing to worry about here”. He thus personally led the survivors of at least four parties across the bridge. Twice wounded, he continued to direct operations with vigour and determination. He then coolly gave orders for the departure, and announced his intention to hold off and “get even with” the enemy. Last seen, he was collecting Bren and Tommy guns and preparing a defensive position which covered the withdrawal from the beach. Lt Col Merritt is now reported to be a prisoner of war.’ 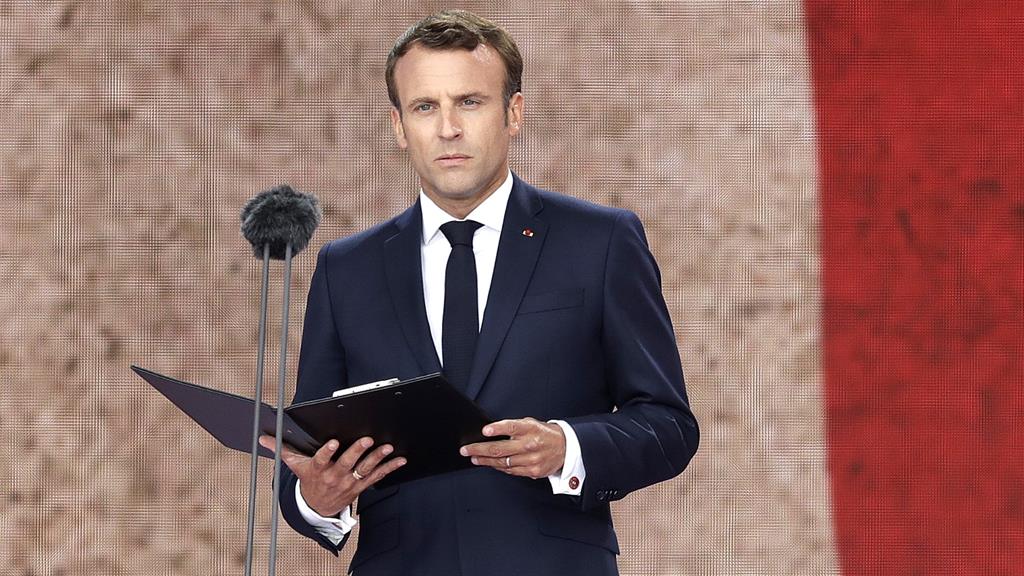 ■​ FRENCH president Emmanuel Macron read from a letter written by resistance fighter Henri Fertet before he was executed at the age of 16. Before he began, Mr Macron addressed the crowd in English, saying: ‘Let me first thank you sincerely, on behalf of my nation.’ He then continued his reading in French:

‘Dear parents, My letter is going to cause you great sorrow, but I have seen you so full of courage that I don’t doubt that you will remain courageous, if only out of love for me. I am dying for my country. My wish is for a France that is free and for the French people to be happy. Not a proud France, not the leading nation in the world, but a France that is hard-working, industrious and honest. That the French people are happy — that is what is important.

‘In life, you must know how to make your own luck. On my account, do not bear any worries. I kept my courage and my sense of humour to the very end and I will sing Sambre Et Meuse because it was you, my dearly beloved mother, who taught it to me. The soldiers are coming to get me. I hope it is quick, my hand is shaking as I write, but it is because I have a small pencil. I do not fear death — my conscience is completely clear. Adieu, death is calling me. I do not want a blindfold, not to be tied to the stake. I embrace you all. But it is, nevertheless, hard to face death. A thousand kisses. Vive la France.’ 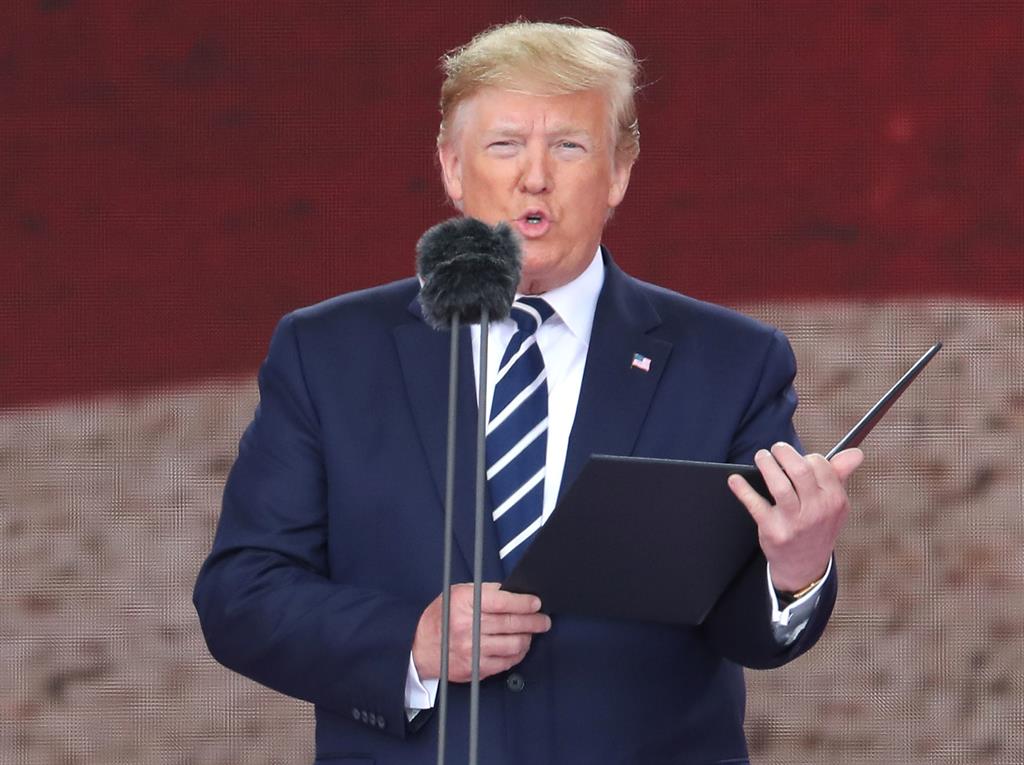 ■​ DONALD TRUMP read an edited extract from a prayer given in a radio address by then US president Franklin D Roosevelt on June 6, 1944. Mr Roosevelt spoke to the nation as Allied Forces were heading across the Channel for the invasion. Mr Trump said in his reading:

‘Almighty God. Our sons, pride of our nation, this day have set upon a mighty endeavour, a struggle to preserve our republic, our religion, and our civilisation, and to set free a suffering humanity. They will need thy blessings, for the enemy is strong. He may hurl back our forces, but we shall return again and again. And we know that by thy grace, and by the righteousness of our cause, our sons will triumph.

‘Some will never return. Embrace these, Father, and receive them, the heroic servants, into thy kingdom. And, O Lord, give us faith. Give us faith in Thee, faith in our sons, faith in each other and faith in our united crusade. Thy will be done, Almighty God. Amen.’