STAR man Jack Grealish said it ‘means the world’ after captaining Aston Villa back to the Premier League at Wembley yesterday.

Headed goals from Anwar El Ghazi and John McGinn, either side of half-time, gave Villa a deserved 2-1 victory over Derby and ended their three-year exile from the top flight.

Jack Marriott’s shot deflected in off Martyn Waghorn nine minutes from time to set up a tense finish but Villa held on to pocket a minimum £170million from the most lucrative game in world football.

‘I’m speechless, I really am,’ said Grealish, who has been inspirational for his boyhood team since returning from a shin injury in March.

‘I can’t even explain to you how happy I am. It means the world, we all know where this club belongs.’

The Villa captain, who was linked with Tottenham throughout last summer, admitted he had expected to leave the club.

And Grealish couldn’t resist a cheeky dig at local rivals Birmingham as he celebrated Villa’s victory.

‘I thought I was going,’ he said. ‘Ten months later I’m here now and I’ve led my boyhood club back to the Premier League as captain and scored against Blues twice. Perfect season.’

Dean Smith’s side had won ten games in a row towards the end of the season to propel themselves into the play-offs and they took the lead when Ahmed Elmohamady‘s wonderful cross was diverted home by a stooping Anwar El Ghazi.

Rams goalkeeper Kelle Roos was at fault for the second as he misjudged El Ghazi’s deflected shot, allowing McGinn to head home.

Substitute strikers Marriott and Waghorn came off the bench to give Derby fresh impetus, the latter being credited with their goal, but Derby suffered play-off defeat for the fourth time in six seasons.

Frank Lampard’s side never really threatened a repeat of the semi-final comeback against Leeds and it was his former Chelsea team-mate John Terry, the Villa assistant manager, who was able to celebrate. 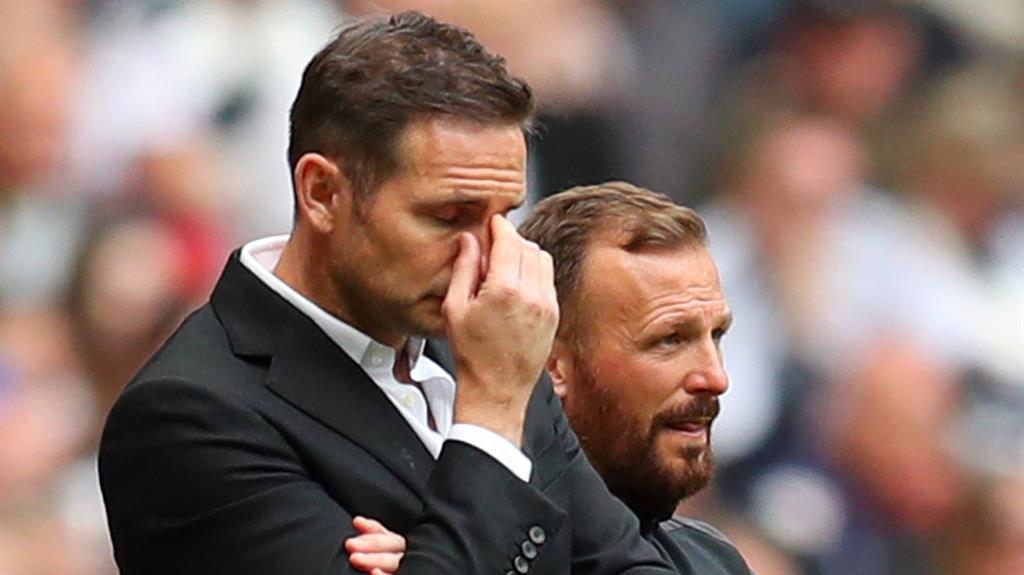 DERBY manager Frank Lampard brushed off rumours linking him with the Chelsea job after yesterday’s loss.

‘I’m not interested in the speculation. I’ll sit down with [Derby owner] Mel Morris over the next few days,’ said Lampard (above). ‘I’ve got a two-year contract and I love working here.

‘The challenges for us to talk about are the loan players going back. They have been influential for us this year and we lose a lot out of contract.’