THE worst flooding in Venice in more than 50 years has prompted calls to better protect the historic city from climate change and rising sea levels as officials calculated hundreds of millions of euros in damage.

The water reached 1.87 meters (6.14 feet) above sea level yesterday, the second-highest level ever recorded in the city and just 7cm (2.75 inches) lower than the historic 1966 flood. Another wave of exceptionally high water followed today. 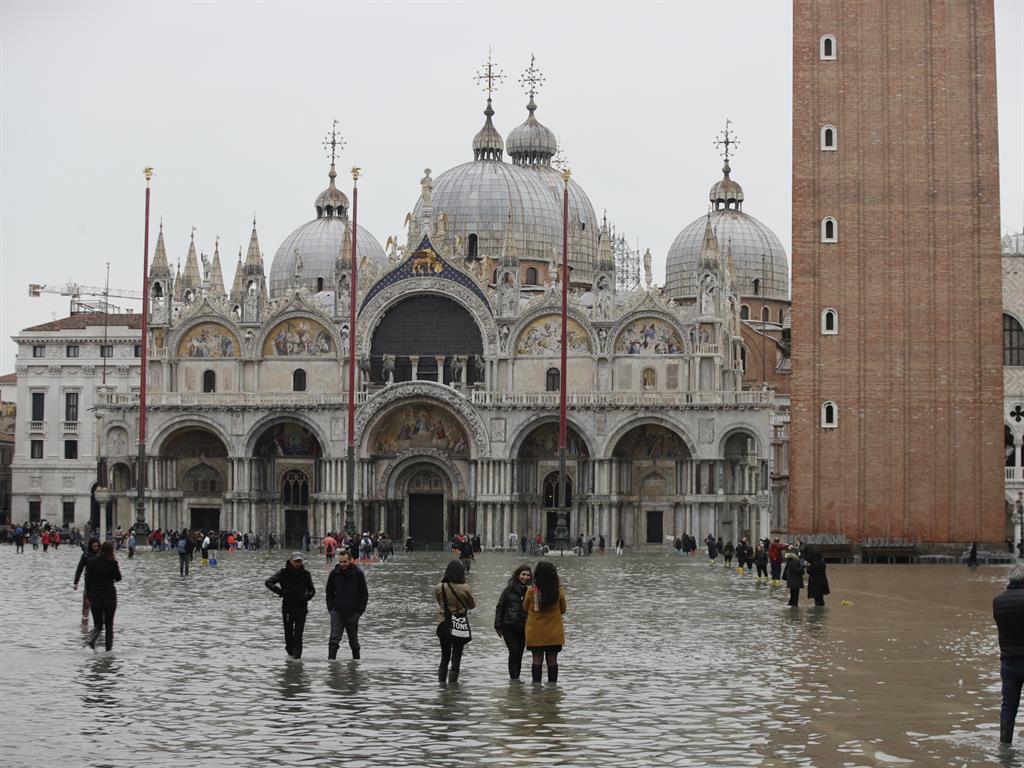 ‘Venice is on its knees,’ mayor Luigi Brugnaro said on Twitter. ‘St. Mark’s Basilica has sustained serious damage, like the entire city and its islands.’

One death was blamed on the flooding, on the barrier island of Pellestrina. A man in his 70s was apparently electrocuted when he tried to start a pump in his dwelling, said Danny Carrella, an official on the island of 3,500 inhabitants.

In Venice, the crypt beneath St. Mark’s Basilica was inundated for only the second time in its history, with water entering through the windows and bypassing all defences. Damage was also reported at the Ca’ Pesaro modern art gallery, where a short circuit set off a fire, and at La Fenice theater, where authorities turned off electricity as a precaution after the control room was flooded. 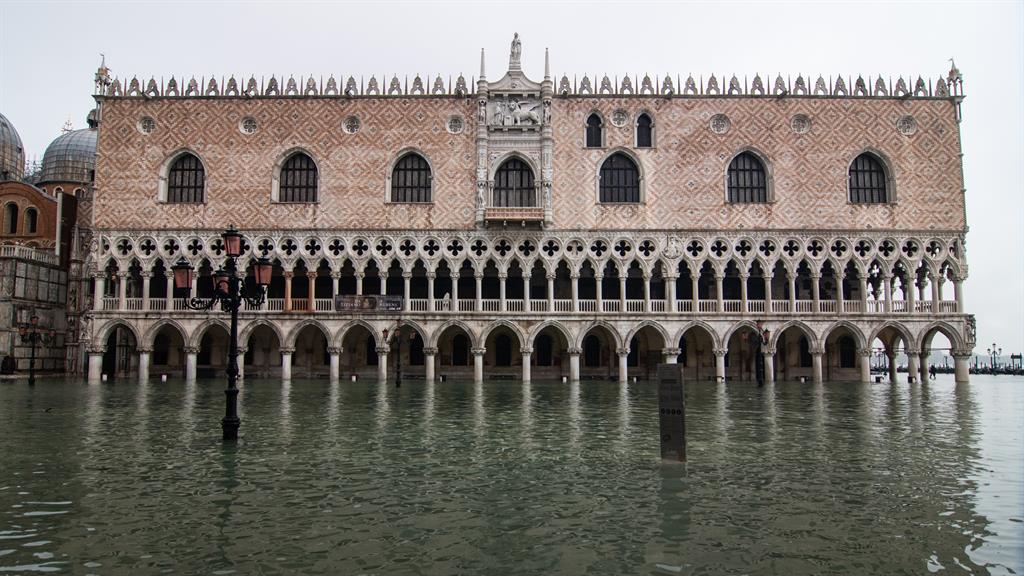 Tourists floated suitcases through St. Mark’s Square, where officials removed walkways to prevent them from floating away. The water was so high that nothing less than thigh-high boots afforded protection. Water poured through wooden boards that shop and hotel owners have previously placed in front of doors to hold back water during flooding. Tourists staying on the ground floor of hotels were forced to move to upper floors overnight.

‘I have often seen St. Mark’s Square covered with water,’ Venice’s patriarch, Monsignor Francesco Moraglia, told reporters. ‘Yesterday there were waves that seemed to be the seashore.’

Mr Brugnaro said damage would reach hundreds of millions of euros, and he called on Rome to declare a state of emergency. Italian prime minister Giuseppe Conte was due to visit the city later today.

‘We are not just talking about calculating the damages, but of the very future of the city,’ Mr Brugnaro told reporters. ‘Because the population drain also is a result of this.’ 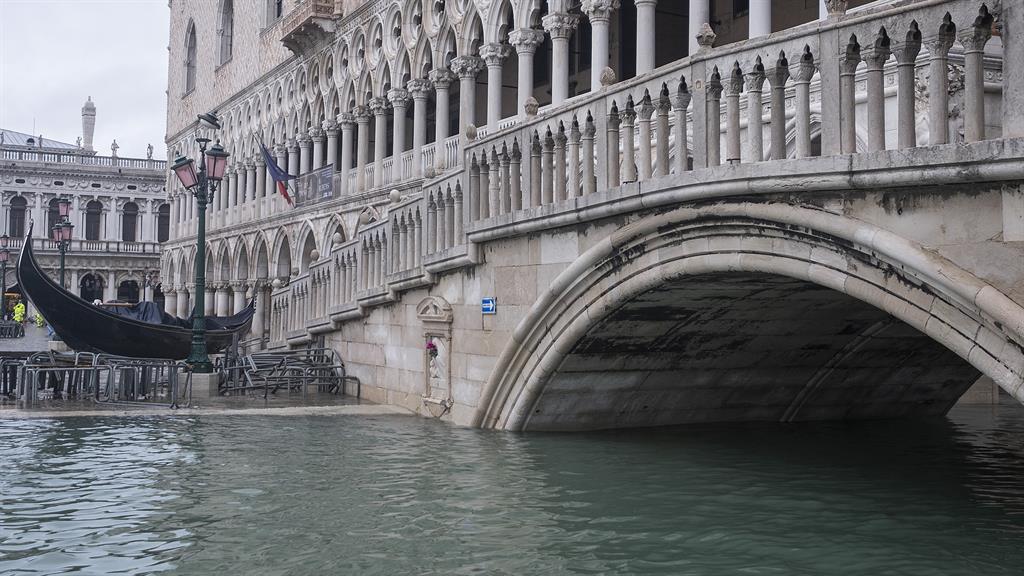 The flooding was caused by heavy rains coinciding with a full moon, which brought high tides that were pushed into Venice by southerly winds. At the same time, rising sea levels because of climate change make the city, built amid a system of canals, even more vulnerable.

Pellestrina was one of the worst hit areas. Facing the sea, water came over the banks of the canal and filled the island like a basin. Carrella said a metre (more than three feet) of water remained today because of broken pumps.

Mr Brugnaro blamed climate change for the ‘dramatic situation’ and called for a speedy completion of a long-delayed project to construct offshore barriers. 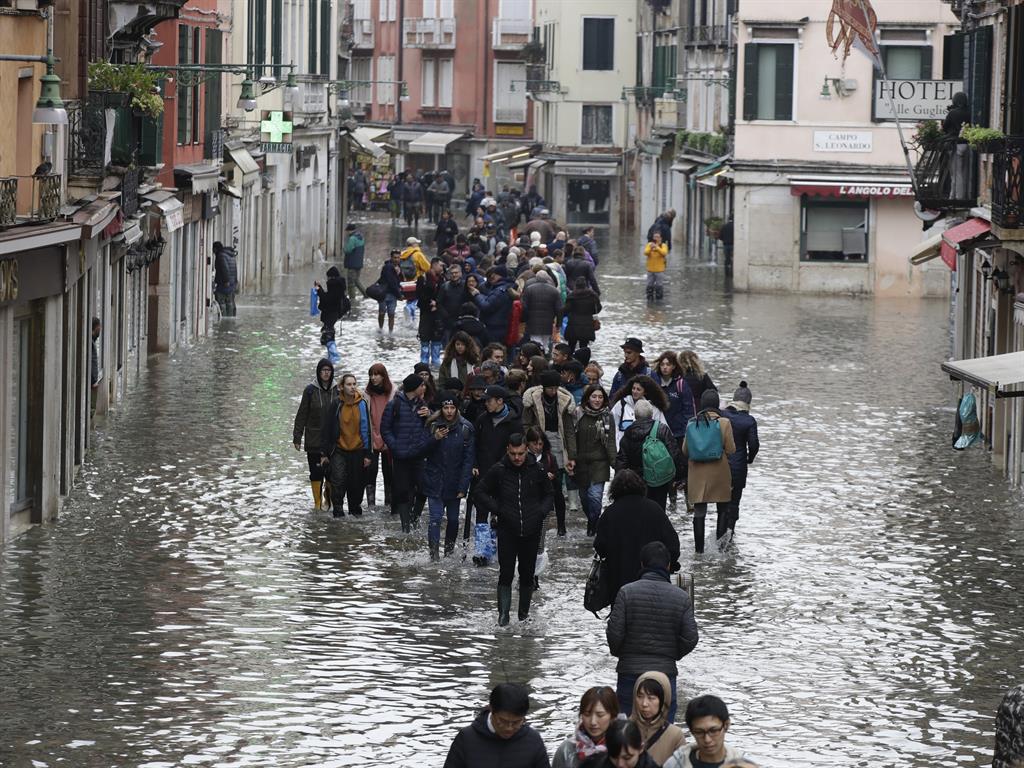 Called ‘Moses,’ the moveable undersea barriers are meant to limit flooding. But the project, which was opposed by environmentalists concerned about damaging the delicate lagoon eco-system, has been delayed by cost overruns and corruption scandals, with no launch date in site.

Luca Zaia, governor of the Veneto region, told SkyTG24 that the barriers were almost complete, but it wasn’t clear if they would work against such flooding.

‘Despite 5 billion euros under water, St. Mark’s Square certainly wouldn’t be secure,’ Mr Zaia said, referring to one of Venice’s lowest points, which floods when there is an inundation of 80cm (31.5in).

Mr Zaia also expressed concern for snowfalls in the mountains above Venice, where up to 120cm (47in) was expected.

Across the Adriatic Sea, heavy storm and sweeping winds also collapsed caused floods in towns in Croatia and Slovenia.

In the Croatian town of Split, authorities today said that the flooding submerged the basement area of the Roman-era Diocletian’s Palace where emergency crews battled to pump out the water.