THE first Briton to be diagnosed with coronavirus was in hospital last night — and he did not catch it in China.

The middle-aged man was found to have the potentially deadly infection after travelling here from Singapore.

He is believed to have walked into a busy A&E at the Royal Sussex hospital in Brighton on Sunday evening after suffering flu-like symptoms.

The man is the third person confirmed as infected in the UK after a Chinese student at York university and his mother were diagnosed last week. The latest case has prompted health officials to announce new precautions.

They will test for the virus if patients displaying symptoms have recently arrived from mainland China — where it has killed hundreds — or from Japan, Thailand, South Korea, Taiwan, Hong Kong, Singapore, Macau or Malaysia.

Anyone with symptoms who has arrived from these places in the last 14 days should immediately self-isolate.

Meanwhile, 78 Britons are now known to be among passengers and crew in quarantine on the Diamond Princess in Japan because of the virus.

The number of people infected on the cruise ship docked at Yokohama rose to 20 yesterday from ten on Wednesday.

The chief medical officer for England, Prof Chris Whitty, said officials were ‘working quickly’ to identify everyone that the new UK patient had come into contact with.

Explaining the tightened procedure for testing, he added: ‘The person who caught this did not catch it in China, they caught it elsewhere in Asia. If a doctor in the NHS sees a patient who has travelled from Asia, now they will start thinking about testing from a wider geographical area than would have been the case before, so we are shifting geography for doctors to test.’

The latest case was only revealed yesterday, when the man was taken to a specialist infectious diseases centre at St Thomas’ Hospital in London.

It normally takes 24 hours for UK health staff to diagnose coronavirus and the Department of Health refused to comment when Metro asked why there was no announcement sooner.

The two Chinese nationals are being cared for in isolation in Newcastle.

More than 80 UK citizens and family members who were evacuated from Wuhan, China, last week have been told they can leave quarantine next Thursday. They are in isolation at Arrowe Park Hospital on the Wirral.

Hundreds of passengers including 66 Britons have been ordered not to leave the World Dream cruise ship in Hong Kong amid fears they may be infected. More than 28,000 people have been diagnosed with coronavirus and 560 have died, the vast majority of them in China.

Among the victims is a doctor hailed a hero for blowing the whistle about the virus in Wuhan, where it first broke out. Dr Li Wenliang, who fell ill after treating infected patients, was last night confirmed to have died despite emergency treatment.

The 34-year-old alerted colleagues on social media in December that a Sars-like illness had been found among people in the city’s seafood market.

It led to him being visited by police and criticised for rumour-mongering by officials before the truth emerged.

Shoppers on a roll in loo paper panic buying 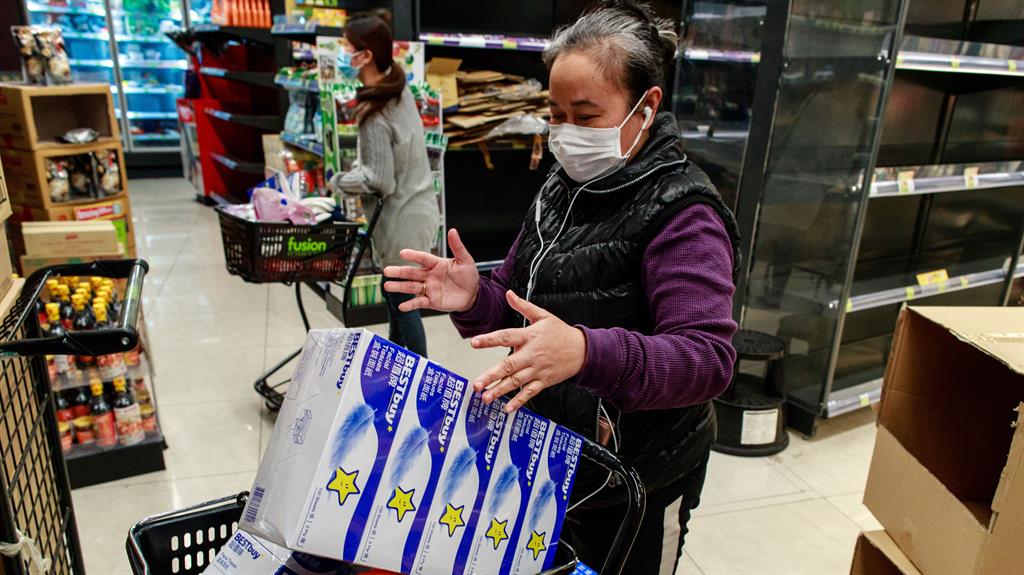 THE coronavirus has sparked panic buying in Hong Kong, with shoppers clearing shelves of tissue paper.

Food, medicines and cleaning products are also in short supply.

The items are being stockpiled after one person died and 24 others were diagnosed with the virus in the Chinese territory.

Lois Strange, 32, a teacher from Britain, said there were chaotic scenes at her local store. ‘Everyone was grabbing as many toilet rolls as they could, packs and packs of them.’