KILLING people — is it funny? Not just now, when the news is filled with a rising death toll, but ever? I was racking my brain on that one as I gritted my teeth through the painful opening episode of Hitmen, in which Sue Perkins and Mel Giedroyc set out to show they can still cut it in comedy after veering off into presenting travelogues and the like.

The answer, for me at least, is that killing can be funny but you need either a finely tuned comic touch or a keenly developed sense of the absurd. Tarantino or the Final Destination movies get away with it — Hitmen decidedly doesn’t.

The set-up is simple enough. Mel and Sue are cast as the unlikeliest of hitmen (the ‘men’ bit of the title is odd but then everything about this debacle is a bit off) and the comedy is intended to be derived from them fulfilling their contracts thanks to ineptness rather than cold calculation. Though why anyone would hire them is a bit of a mystery.

The central conceit is one-star cringe but you do get some welcome diversions in the shape of the guest cameo cast. Nick Mohammed as a disco-dancing spider, Asim Chaudhry as rival killer Charles and a Riverdancing Jason Watkins proving he can steal any scene he’s in even with a bag over his head push that star rating up to a giddy two. Indeed the entire series of Hitmen is studded with top comedy guest talent. You have to wonder what they thought they were signing up for.

Another minor plus is the jukebox soundtrack, which piques the interest when the misfiring gags don’t. Arcade Fire, Plastic Bertrand and Jimmy Somerville tickled my inner Shazam. But that’s small beer when Mel and Sue’s tried-and-tested chemistry fails to spark into anything approaching believable characters. If Hitmen was on Bake Off it would be the soggiest of bottoms — it misses the target by a mile. KEITH WATSON 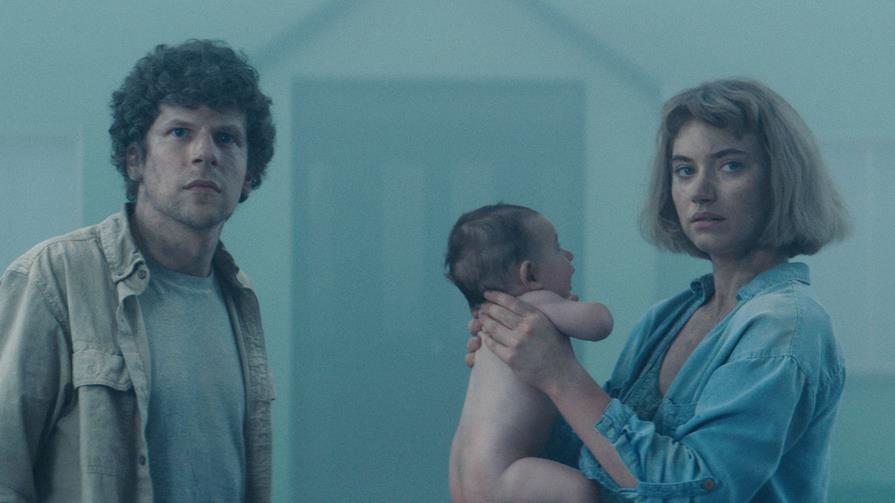 THE release of this Twilight Zone-style thriller now feels freakishly well timed, even if watching a couple go mad under enforced isolation might get a bit too close to home for some over the coming days and weeks.

Unmarried Gemma (Imogen Poots) and her boyfriend Tom (Jesse Eisenberg) are hunting for their dream home. She’s a childless early years teacher and he’s a gardener who we first see burying a dead baby bird. Was it dislodged from its nest by a cuckoo? Or by Tom? Either way, it’s a bad omen.

That same day they meet a strange estate agent (Jonathan Aris) who takes them to view Yonder, an eerily empty new development whose Monopoly houses are the same mint green colour of hospital scrubs. Yonder is ‘tranquil and practical — it has all you’d need and all you’d want’ the agent tells them; unless, that is, you want to leave.

Tom and Gemma seem sentenced to solitary confinement in this suburban hell. Then one morning a cardboard box turns up on their driveway. It contains a baby. An accompanying note reads: ‘Raise the child and be released.’

The suffocating conformity of suburbia is a hardly a new movie metaphor — and this never fully delivers on the higher concepts it hints at.