JODIE WHITTAKER’S Doctor Who looks ever so slightly panicked. Crashing through the roof of a Sheffield-bound train that appears to be under some sort of extraterrestrial attack, she leaves the rather perturbed passengers wondering how this strangely wired woman will get them out of a hellish Hathersage alive. ‘I don’t know,’ she quips. ‘Half an hour ago I was a white-haired Scotsman.’

It’s a brilliantly knowing line in an opening episode full of grounded northern humour, magic, emotion and heart. There’s nail-biting action, impressive stunt work and tear-jerking moments as the new Doctor and her three companions work out who they are and what they can do.

‘The thing is, I was actually in Peter [Capaldi]’s costume for 90 per cent of the first episode,’ says Whittaker moments after the premiere in Sheffield. ‘So I was literally in someone else’s shoes, trying to discover things and settle in — just like the Doctor is.’

So for Whittaker there’s a gentle jubilation in a scene later in the first episode where her two young friends, Ryan and Yasmin (Tosin Cole and Mandip Gill), take her to a charity shop and she works out what she wants to wear, flinging clothes out of the changing room.

‘At that moment it feels like the electricity of the Doctor is all connected again — and that I could get into my own skin too,’ she says. ‘It was such a helpful episode for an actor playing a new role.’

Helpful, too, for anyone who wants to give the enduring fantasy series another go. This reboot is an inclusive Doctor Who that will appeal to new audiences and to people who felt like the show was getting a bit bogged down in its own mythology. Die-hard Whovians may initially worry at the lack of familiar baddies — or, indeed, the Tardis in the first episode — but for new showrunner Chris Chibnall, it’s key that Doctor Who remains true to the show he loved as a child.

‘I hope it demonstrates everything people have come to love about it — there’s fun, monsters, action, adventure, great characters and an amazing Doctor,’ he says.

Chibnall promises the Doctor and her companions will go on ‘big emotional journeys’ but it’s telling that each episode is a self-contained adventure with a start and end.

And although the Woman Who Fell To Earth is something of an introductory episode, the storyline combines elements of a murder-mystery plot with important things to say about the passing of time, the nature of family and a high-stakes showdown with a baddie with a stomach-turning appearance.

‘It’s fun and playful, and I got a lot of space to fizz around,’ says Whittaker. ‘I didn’t need to contain anything, there are no rules.’

Which extended to doing her own stunts: the episode’s climax features the Doctor hundreds of metres above Sheffield, having to take a huge risk so she can try to save someone’s life.

‘It was 4am and I absolutely bricked it,’ she laughs. ‘I was trying to be really cool in front of all the crew and I know it was all safe but it was nerve-racking. The amazing thing about the Doctor is that there’s plenty of self-belief but physically they don’t have any outlandish, otherworldly skills. They have a body like anyone else. So the faith to do what she does in that episode is really euphoric.’

Euphoria sums up the atmosphere in the premiere, both for actors and fans. Whittaker and Chibnall have created a Doctor Who that pays tribute to the show but avoids a nostalgic retread. It feels fresh yet genuinely able to thrill, frighten and tug the heartstrings. As the posters all over Sheffield say: ‘It’s about time.’

Jodie and her friends 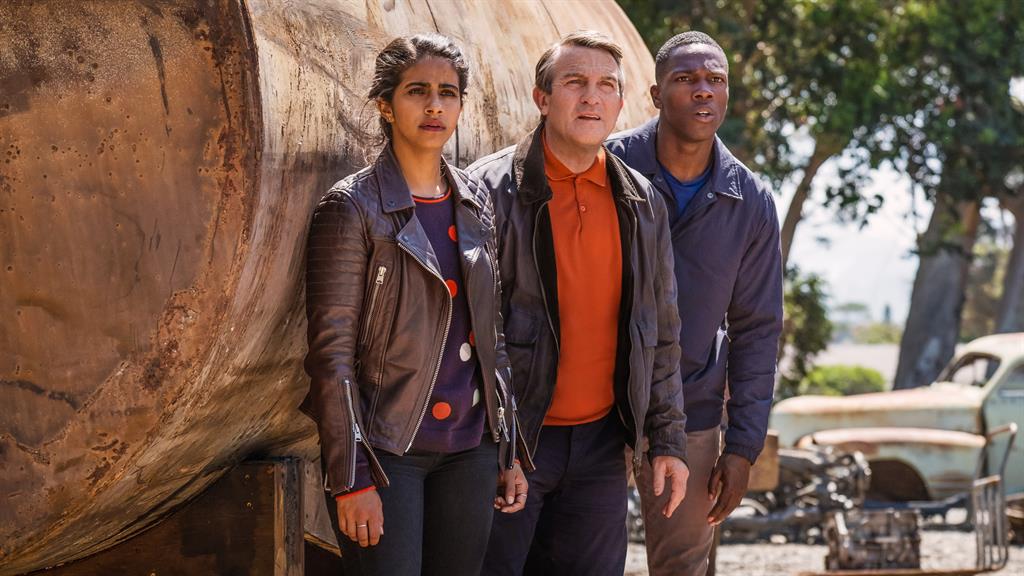 With three friends/assistants following the Doctor through time and space, this Doctor Who feels much more like an ensemble piece. Chemistry is crucial and Bradley Walsh, who plays his character Graham with a baffled charm, says he felt a sense of pride as the quartet’s performances buzzed off each other.

‘We’re lucky we’ve got a lead actress who is wonderful to be around, leads from the front, is funny, kind and generous in her performance,’ he says at the premiere.

‘It has been amazing,’ agrees Mandip Gill, who plays Yasmin, a trainee police officer despatched to a curious case in the Peak District. ‘I’ve had such a laugh and happen to get paid for it. I’m winning!’

And newcomer Tosin Cole, who plays Ryan, a character battling with his own sense of worth but who has inner reserves of strength, is taking potential new fame in his stride. ‘It’s good, innit?’ he grins after seeing the episode for the first time. ‘Proper good. I’m chuffed.’

■ Doctor Who returns to BBC1 on Sunday at 6.45pm, then iPlayer