OBVIOUSLY I love a period drama,’ says Poldark’s Eleanor Tomlinson, ‘but an alien period drama… that’s quite a new genre!’

She’s sitting, in suitably ravaged costume and make-up, just to the side of a scorched earth set for the BBC’s new adaptation of The War Of The Worlds. In Sunday’s opening episode we saw snapshots of what is presumed to be her character in the future, wandering this barren landscape. ‘There’s quite a lot of trauma for me in there,’ she gesticulates. ‘But in a more comfortable costume than Poldark, even if my character has scavenged it from odd people…’

Actually, she’s pointing to a massive warehouse in Birkenhead in which the entire Red World was built, rather than the wasted environs of Woking, where HG Wells’ original extraterrestrial invasion story was set. But the commitment to detail and ambition of this War Of The Worlds adaptation, which unusually is set in the period in which Wells wrote it, is impressive. Tomlinson, too, is fully committed — she rode plenty of horses in Poldark but in the first episode here we saw her rear up her steed as an explosion went off… and an alien stepped over a church.

‘That was great,’ she says with a glint in her eye. ‘I went on a big, old training programme to be sure I was ready for whatever was thrown at me and they pretty much threw everything at me! But it gave me a confidence. You’d expect male stars to take on the stunts so I felt it important that I could too.’

It’s a significant point given this is clearly a traditional War Of The Worlds with refreshingly modern politics and sensibilities. For all Tomlinson’s talk of this being a faithful adaptation of a classic, her character Amy is a strong, practical, three-dimensional female lead who is barely in the book.

‘I had seen the Tom Cruise film when I was a teen and I read the book,’ she says. ‘But in both there’s not much to go at with my character — she’s not really in it. That was good because it meant there was more for me to work with. She’s pretty groundbreaking for her time, a modern woman who has grown up in India and is having a relationship with a married man [Rafe Spall, who plays the journalist, George]. She’s independent, passionate and has a keen interest in space and Mars. Her life force is captivating and to have her at the core of the drama is so refreshing.’

Elsewhere, the astronomer who first comes across the Martian capsule (Ogilvy, played by an enthusiastic Robert Carlyle) hints at his homosexuality and there are stern appraisals of colonialism and empire building. The relationships between Amy, George and Ogilvy stem from the fact they are all considered pariahs who don’t quite fit into society.

‘I really do think we break into a different realm of sci-fi with this — there’s a fresh, different approach, which excited me,’ adds Tomlinson.

The first episode, though, was a bit hamstrung by actors gazing wide-eyed at the sky/imaginary alien — and it’s rumoured the long post-production delays were due to CGI tweaks.

‘There was quite a bit of running away from invisible creatures,’ Tomlinson admits, ‘but the script and characters are so good, it’s been easy to play the truth of the scene and concentrate on the acting rather than worry about the CGI.’

Which is fair enough — after all, how many people can draw on the actual experience of seeing an alien landing? However many doors Poldark has opened for Tomlinson — and she says it’s a lot — facing up to aliens probably wasn’t one she was prepared for.

Those martians are lucky to be chasing Amy 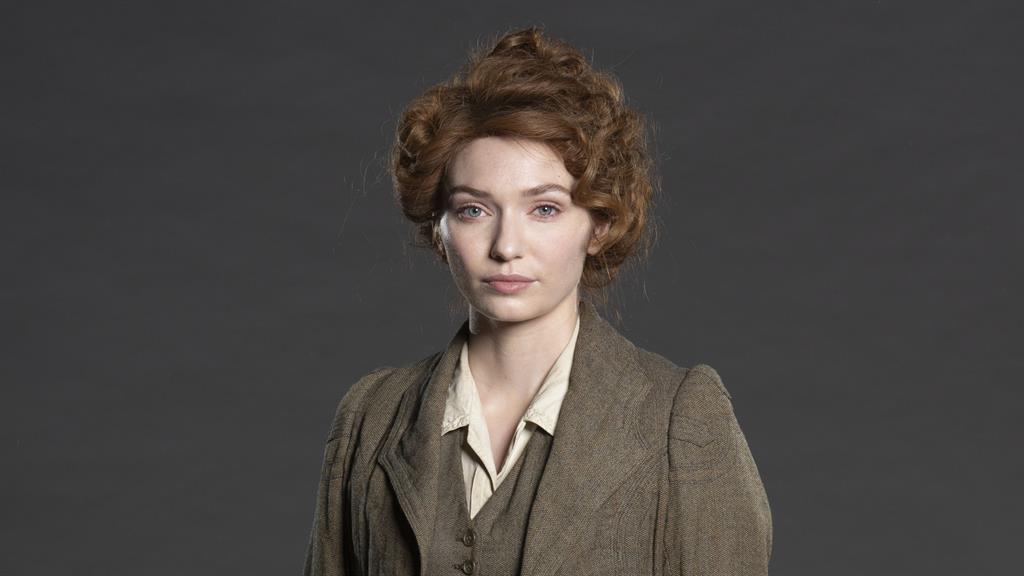 One of [writer] Peter Harness’s greatest creations in the adaptation is Amy. She is wild, wonderful and brilliant — and blows away every expectation of what a woman is supposed to be in this time period. Amy is the leading light in this story as she tries to conquer and defeat the Martian invasion, and what you get from Eleanor’s performance are these two different characters as the story progresses. She has a sense of optimism and what the world can be, although she needs to fight the laws of oppression and societal convention. Eleanor shows both sides of this character and her journey with such ease — it is really something to watch.

■ War Of The Worlds continues on BBC1 on Sunday at 9pm. Catch up on iPlayer