GEORGINA BURNETT is standing in her immaculate kitchen looking as fresh and effortlessly energetic as you would imagine someone who used to get up at 2.45am to present the morning weather.

‘A house has to be really bad to get me excited,’ she says, the backdrop of high-quality Benchmarx cabinets and Rangemaster cooker suggesting otherwise.

The Australian-born TV presenter may look eternally glamorous, but she’s always ready to get her hands dirty and renovate a house — and the worse it is when she buys it, the better.

This glorious seven-bedroom property in Sevenoaks, Kent, is the eighth home that she has bought, refurbished, lived in and sold, and she’s not finished yet, eying a self-build project in the future. Her aim, she says, has always been to find the most dilapidated properties possible in great locations and do as much of it herself, including filling the houses with furniture she has upcycled. The house she shares with husband. Andy, and daughter, Bonnie, was a school in the 1950s before going on to become a private residence.

When they bought it three years ago it was the ultimate fixer-upper, with a ‘derelict’ falling down porch that had been propped up with a piece of wood. Inside the kitchen was full of mould, with broken windows, and the garden was like a building site. What is now the dining room was a workshop and the previous tenants had lived in the house for two years without any heating. On top of all this, Georgina was six months pregnant — had she finally met her property match? ‘It was a mix of excitement and dread,’ she recalls, ‘I was pregnant and very tired and, as I’m a perfectionist, I wanted to do it right.’

Since she was a child, Georgina has been renovating and upcycling.

She recalls a particularly rebellious stage. ‘When I was about 15 I secretly hired a floor sander and sanded the floorboards in my bedroom without my parents knowing. When they found out they actually quite liked what I’d done.

‘Then when I was at university I would style the bedrooms of richer students to make some money on the side. One time I stayed up for three days straight painting my own room.’

With this house, Georgina didn’t have time to waste. The baby was on the way and she was determined to finish it quickly. The builders wanted to rip out the ceiling but she convinced them to repair it, determined that as many of the original Victorian features as possible should stay.

In the hallway, Georgina runs her hand proudly under the bannister. ‘I wanted to save this,’ she says, ‘there was talk of ripping it out. So I rubbed it down on my own. It came out pretty good.’ The bannister runs up the generously-sized stairwell to two more floors. In the bathroom is an exposed brick wall, also Georgina’s handywork. She exposed and sealed the brickwork, using watered down paint to disguise old staining, because none of the builders wanted to do it.

Throughout the house, there is a wonderful sympathy for the original period features and style, with muted colours that are punctuated by dashes of colour from artworks by artists such as Terry Donnelly and Yvonne Coomber. 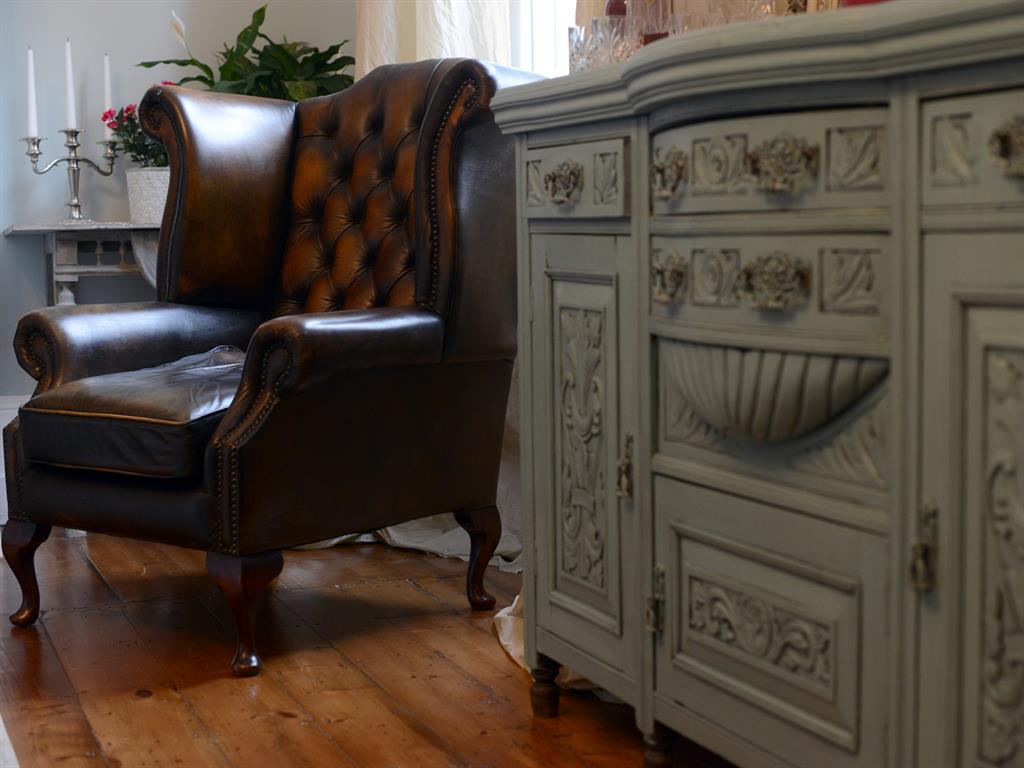 The trick, says Georgina, to future-proofing your home style is to inject the latest colours and patterns into the accessories (one picture frame has been painted three times) but keep the background canvas the same, saving money and reducing waste.

Almost all of the furniture in the house — she estimates 95 per cent — is upcycled, and much of it hand-upholstered eBay finds, such as the chaise longue in the living room. The gigantic four-poster bed in the bedroom was also from eBay, and was around £500. ‘Actually that seems quite expensive,’ she says. ‘The funny thing is, one of the objectives when looking for a new property was to find one with a master bedroom big enough to fit the bed. I’ve lived in studio flats before that are the same size.’

Two guest bedrooms are quirkily given themes — Paris and Folkestone — two of Georgina’s favourite places and the latter was once her home. Having worked in TV, she still presents the weather on the BBC, and the 39-year-old has now set up The Home Genie, a property and interiors vlog, where she shares her knowledge and tips on all things home and upcycling. 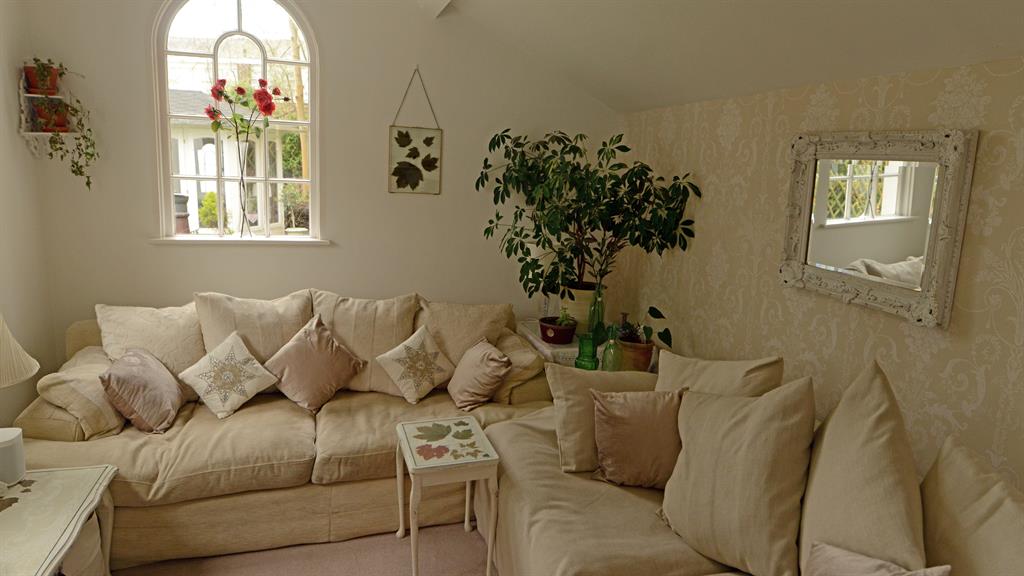 Georgina has attracted a huge following for her vlogs about how anyone can transform their home themselves. She says colour is one of the most important elements and artworks shouldn’t be scrimped on. ‘Think about how you want a room to feel and make you feel,’ she says. ‘The colours will make you feel a certain way, so work out which room should make you energised, which relaxed, and so on.’

Georgina believes we Brits buy too much new furniture in line with the latest trend that ‘we just expect to throw away. Having said that, I also think we are too quick to just replace accessories even when you can so often bring them up-to-date as very small projects, which barely take any time. 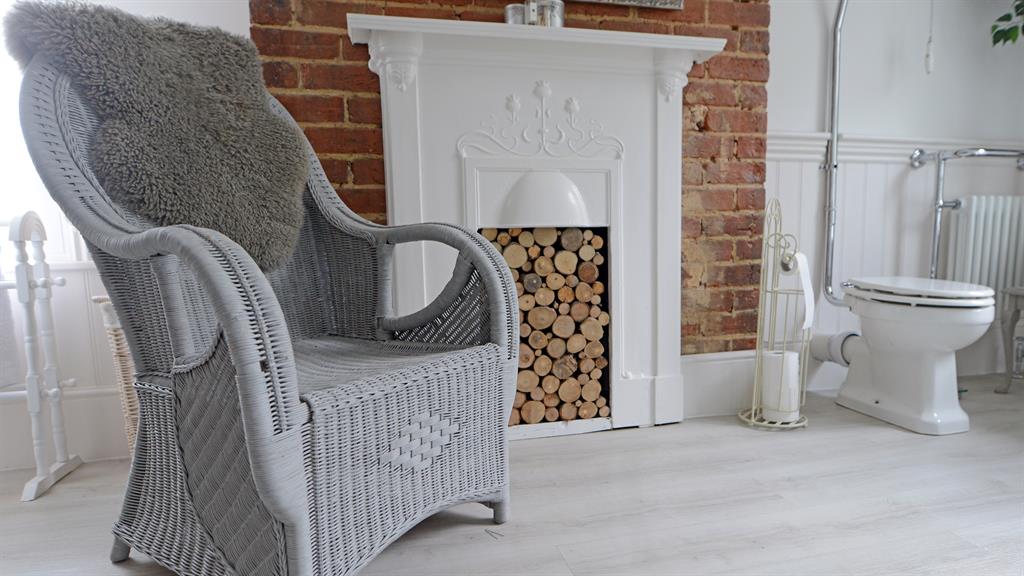 ‘I’m not saying we shouldn’t buy anything, it’s exciting to refresh the decor of a room with a new piece. I just wish people would think before they throw things away, particularly big bulky furniture. Even my daughter, who is three, helps me upcycle which shows how easy it can be.’ One thing intrigues me — she is known for the weather and interiors, does she see any link? She stops to think.‘Well with the virtual world and all these television programmes about property, everyone is talking about interiors. And we love talking about the weather in Britain too.’

■ Think about what the item could be in future, rather than what it was.

■ Chalk painting is one of the easiest ways to upcycle furniture as it barely needs any prep. 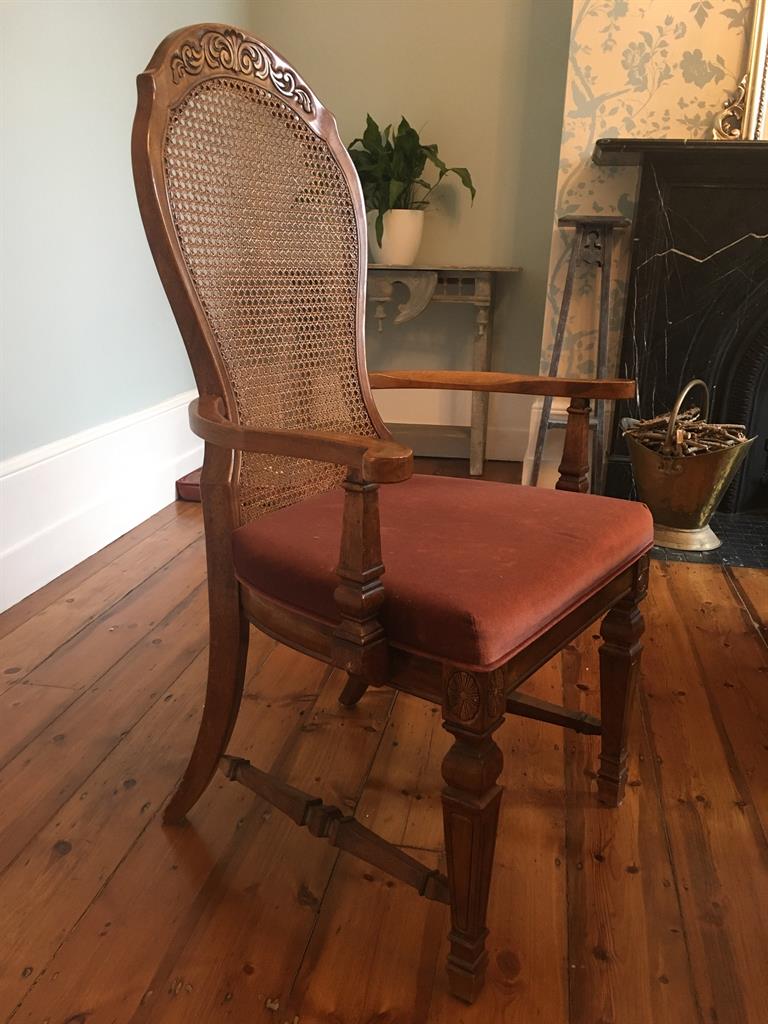 ■ Getting the right brush is worth the investment as it will reduce time and give you a better finish.

■ Bring out any embellishments with a darker wax.

■ If an item is quite plain you can style it up with decoupage or stenciling.

■ Even the most ugly, boring piece of furniture can become a masterpiece, so think big.

■ Reupholstering simple items can be easier than you might think, but you can also chalk paint fabric.

■ A great way to accessorise a room in the right colour is to spray paint glassware.

■ Before you throw something out, think twice. You can usually give it a new lease of life with little effort, and have fun on the way.

■ Don’t be afraid to experiment as you can usually start again if it goes wrong.