DONALD TRUMP has been accused by his opponents of governing ‘by temper tantrum’ over his demand for £4.5billion to build a wall on the Mexican border.

The US president was blamed by top Democrats after thousands of federal employees were left without pay because Congress refuses to approve spending plans unless the barrier is ditched.

Mr Trump said in a live TV address — his first from the Oval Office — that he would not back down because the wall is needed to address a ‘humanitarian and security crisis’ facing America. 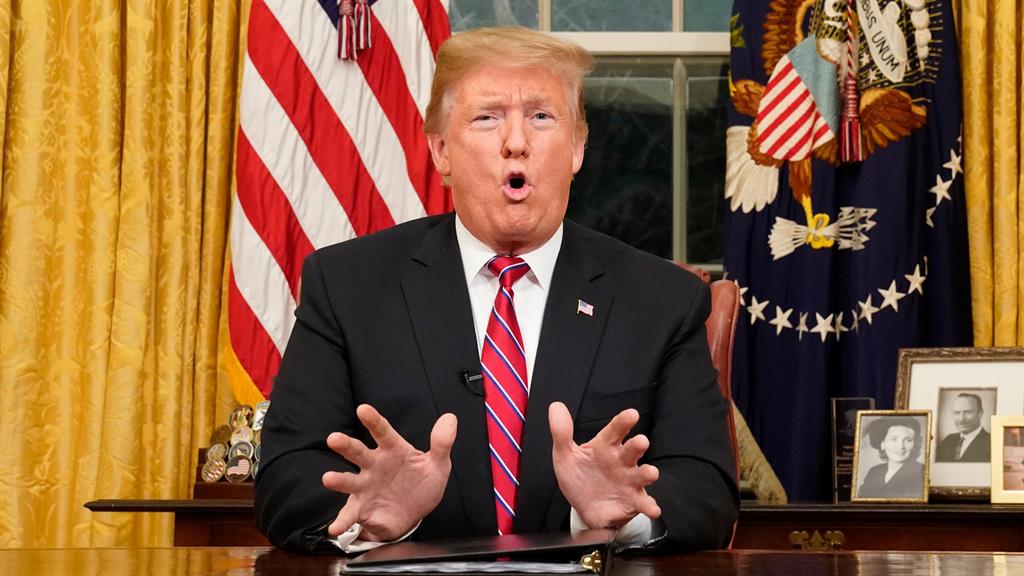 But Senate minority leader Chuck Schumer said the president was ‘pounding the table’ after failing to get Mexico to fund the wall or to convince Congress to approve the ‘expensive, ineffective’ barrier.

‘American democracy doesn’t work that way, we don’t govern by temper tantrum,’ Mr Schumer said in his own TV address alongside the House speaker Nancy Pelosi. Mr Trump said in his speech that the wall was needed to keep illegal immigrants and drugs out of the US. He said he had been moved by meeting the families of people killed by ‘illegal aliens’, adding: ‘I’ve held the hands of the weeping mothers and embraced the grief-stricken fathers.’

The president added: ‘I will never forget the pain in their eyes, the tremble in their voices and the sadness gripping their souls. How much more American blood must we shed before Congress does its job?’

Mr Schumer said he was ‘stoking fear’, adding: ‘Most presidents have used Oval Office addresses for noble purposes. This president just used the backdrop of the Oval Office to manufacture a crisis.’

The federal shutdown affecting 800,000 staff, now either temporarily laid off or working for free, has become the second longest in US history at 19 days.

THE tap might have to be turned off at the White House over unpaid bills, joked water bosses who are owed £3.9million dollars because of the federal funding stand-off. DC Water’s chairman Tommy Wells, who was told during a meeting that the payment would be delayed, said: ‘Is there a time from non-payment when we cut someone’s water off?’ Another board member asked him: ‘1600 Pennsylvania Avenue [the White House], is that what you’re talking about?’