CHILLING footage shows one of the London Bridge terrorists buying knives and bottles of wine he planned to use in the rampage that left eight people dead.

CCTV film of Rachid Redouane buying pink kitchen knives at a branch of Lidl in East Ham, east London was shown to an Old Bailey inquest.

The 30-year-old was also pictured at a barbecue held by accomplice Khuram Butt, 27, to celebrate the birth of his daughter the day before the shopping trip on May 15, 2017.

On May 30, Redouane returned to the same supermarket to buy 13 bottles of rose wine, which he later filled with petrol to use as makeshift Molotov cocktail bombs.

The hearing was told that they could have diverted at the last-minute to London Bridge from their original target after a mobile phone found in their van held directions to Oxford Street.

Police also uncovered ‘viable’ petrol bombs and fake suicide vests made from plastic bottles covered in silver tape in the van. DNA analysis suggested Redouane had made the bogus suicide belts with help from Zaghba.

Acting Detective Chief Inspector Wayne Jolley said all three attackers were working together by at least January 14, 2017. They regularly trained at the Ummah Fitness Centre in Ilford, east London, and went on Sunday swimming trips to nearby Stratford. 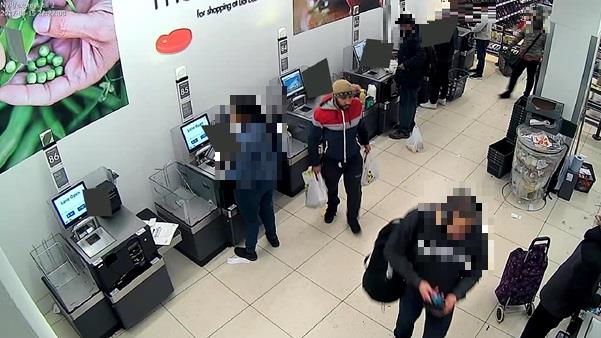 On the day of the attack, Butt made an online booking to hire a van from Hertz, and the attackers bought 29 bags of gravel to add weight. He had tried to hire a 7.5-tonne lorry but the branch he asked to collect it from had closed at 11am, the court heard.

Just before 10.07pm that night they mounted the kerb on London Bridge, hitting pedestrians before rampaging through Borough Market. Minutes later they were shot dead by police. The hearing continues.