THESE pictures are believed to be the first evidence of a new phenomenon — squirrels building nests with plastic bags.

This rodent is seen on its hind legs seemingly struggling under the bulky waste.

It can barely see where it’s going through the plastic — then puts it in its mouth and scurries off.

The pictures are believed to be the first photographic evidence of this ‘odd’ behavioural change in squirrels.

In 2018 scientists confirmed the creatures were using plastic waste to build nests.

This squirrel was spotted by photographer Henry Jacobs, 73, on a walk along the Lee Valley Navigational Canal in the London borough of Haringey.

Henry said: ‘When I first saw it, I didn’t know what I was looking at.

‘I knew it was an animal, but I genuinely couldn’t work out what animal it was for the first few seconds.

‘It was a very unusual sight. I thought, what is it doing with that? Why would it want plastic? It looked very odd.

‘I didn’t even know about squirrel nests until I looked it up later that day — and then I found out that they use what is available to them.’ 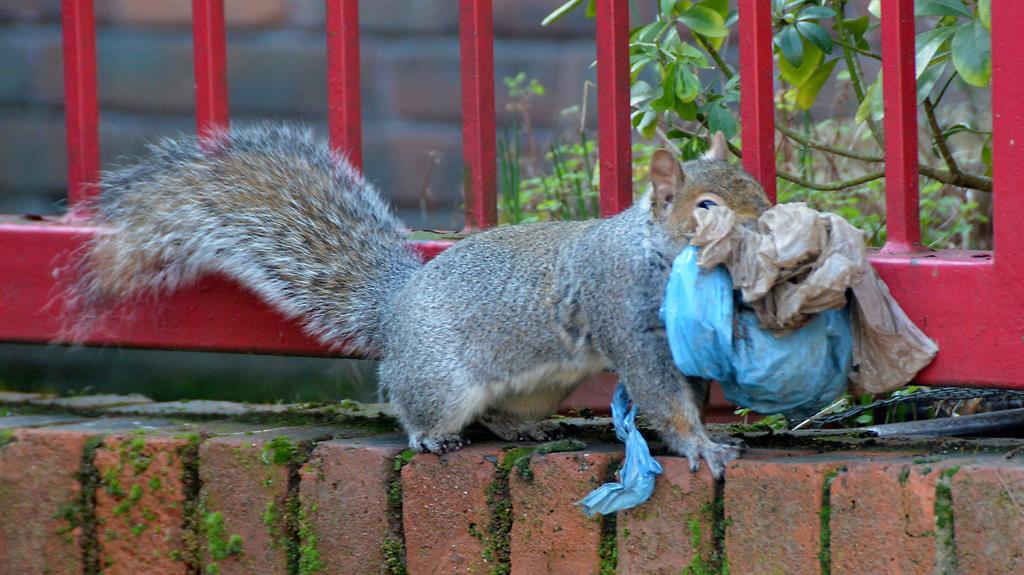 Henry admitted it was a ‘real shame’ that the squirrel had to pick up litter from the canal path.

He said: ‘The people who look after the towpath do a pretty good job in making it look really nice.

‘It’s a real shame that people want to spoil the environment by throwing rubbish about.

‘Why people can’t just take their rubbish home and put it in the bin, I don’t understand.’

The behavioural change in squirrels collecting plastic for nest-building was first noted by an Indian scientist but has seemingly never before been caught on camera.

Dr Mewa Singh, from the University of Mysore in Karnataka, published his research findings in 2018 after observing the behaviour in Indian palm squirrels.

His team watched them use plastic and cigar butts as nesting materials in urban areas instead of leaves, twigs, shredded bark, mosses and other soft materials.

Researchers saw the squirrels collect a long plastic sheet from a dump, check it and tear it into pieces.

Three nests were found at one location, all built using similar plastics.

At another spot, also near a waste site, just one of four nests in a tree was built solely with natural materials.

Dr Singh said: ‘The use of plastic for nest building by the palm squirrel is a typical example of the struggle for existence in altered habitats.’