TOMMY ROBINSON has been jailed for a second time over a video he broadcast on Facebook featuring defendants in a criminal trial — in breach of a reporting ban.

The English Defence League (EDL) founder, real name Stephen Yaxley-Lennon, showed little reaction as he was handed a nine-month sentence at the Old Bailey today — of which he will serve just nine-and-a-half weeks.

Robinson, 36, of Luton, Bedfordshire, was found to have committed contempt of court last Friday, following a two-day High Court hearing held at the Old Bailey.

He looked up at the public gallery and winked as he was led to the cells through the secure dock in the centre of the courtroom, carrying a holdall, before being driven away in a prison van.

Dame Victoria Sharp, sitting with Mr Justice Warby, said the contempt committed by Robinson was not ‘deliberate defiance’ and he had not intended to ‘interfere with the administration of justice’.

However, the judge said his conduct amounted to a ‘serious contempt’ and involved ‘reckless disobedience’ of an important court order, imposed to protect a trial and a later linked trial.

Robinson was found in contempt in three respects when he filmed men accused of the sexual exploitation of young girls and live-streamed the footage on Facebook, in breach of a reporting ban, outside Leeds Crown Court in May 2018.

Dame Victoria and Mr Justice Warby concluded he committed contempt by breaching the reporting restriction imposed on the trial, by live-streaming the video from outside the public entrance to the court and by ‘aggressively confronting and filming’ some of the defendants.

Giving reasons for their findings on Tuesday, Dame Victoria said Robinson encouraged ‘vigilante action’ in the video, which lasted an hour-and-a-half and was viewed online 250,000 times on the morning of the broadcast.

His sentence was made up of six months for the Leeds contempt, plus three months for an earlier contempt committed at Canterbury Crown Court in 2017.

Dame Victoria told Robinson that the time he previously spent behind bars will be taken into account, reducing his sentence to 19 weeks — of which he will serve half before being released.

She said the purpose of sentencing for contempt was ‘punishment and deterrence’ and said the court was also ‘concerned to demonstrate its determination to uphold the rule of law’.

The judge added: ‘The respondent (Robinson) cannot be given credit for pleading guilty. He has lied about a number of matters and sought to portray himself as the victim of unfairness and oppression.

‘This does not increase his sentence, but it does mean that there can be no reduction for an admission of guilt.’

She said the court took into consideration his 11 previous convictions, including for offences of violence, fraud and disobeying court orders, as well as the effect on him of his previous time in jail, his mental health and the impact of his incarceration on his family.

Supporters who had gathered outside court briefly clashed with police as the sentence was announced before marching to Parliament Square.

Officers put on their helmets as they were pelted with drinks bottles and cans, and City of London Police said three arrests were made. 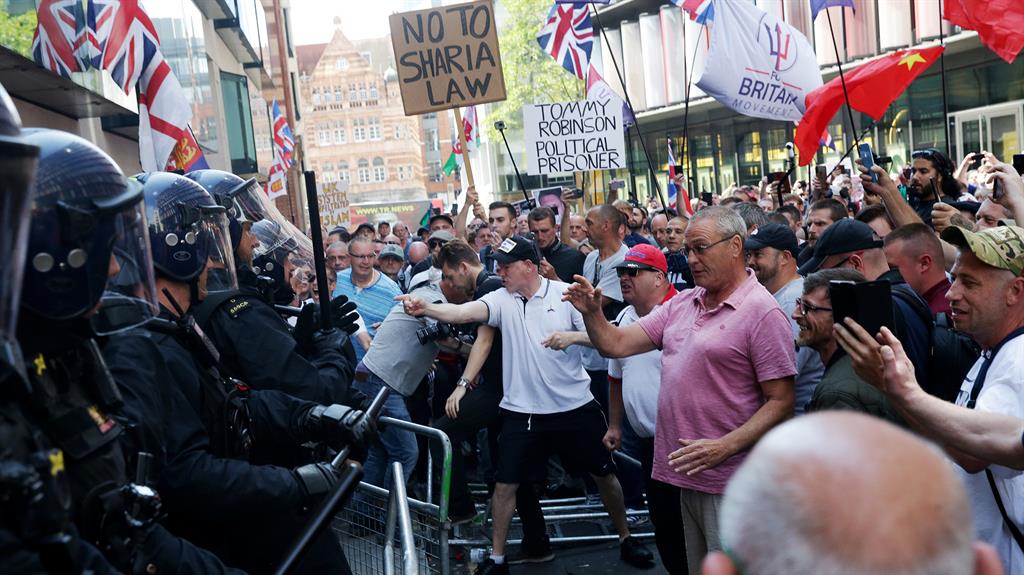 Robinson broadcast the footage while the jury in the second of a series of linked grooming trials was considering its verdict.

The video was eventually viewed 3.4 million times after being shared following his arrest.

A reporting restriction was in place which postponed the publication of any details of the case until the end of all the trials involving 29 people, in a bid to ensure all defendants received a fair trial.

Robinson was jailed for 13 months — made up of 10 months for the Leeds contempt and three for the Canterbury incident — by a judge at Leeds Crown Court on the day of the broadcast.

He served 10 weeks in jail before being freed after the original finding of contempt was overturned by the Court of Appeal in August 2018.

But the case was then referred back to the Attorney General Geoffrey Cox QC, who announced in March that it was in the public interest to bring fresh proceedings against Robinson.

Dame Victoria and Mr Justice Warby gave permission for the Attorney General to bring a new case against Robinson at a hearing in May.

Speaking after the sentencing, Mr Cox said: ‘Today’s sentencing of Yaxley-Lennon serves to illustrate how seriously the courts will take matters of contempt.

‘Posting material online that breaches reporting restrictions or risks prejudicing legal proceedings has consequences, and I would urge everyone to think carefully about whether their social media posts could amount to contempt of court.’

Robinson’s barrister Richard Furlong raised the possibility of an appeal against the court’s decision on contempt and was told he has 28 days to apply.

Nick Lowles, chief executive of Hope not Hate, said: ‘Stephen Lennon put at risk the trial of men accused of horrendous crimes with his live-streaming antics.

‘He doesn’t care about the victims of grooming, he only cares about himself. He now faces yet another stint behind bars.

‘So far this year, he’s been humiliated at the ballot box, kicked off social media platforms for hate speech, jailed for contempt, and it’s only July.’

The sentencing hearing today was briefly delayed after Robinson, who arrived outside court accompanied by far-right commentator Katie Hopkins, was mobbed by supporters.

Robinson was wearing a black T-shirt emblazoned with the words ‘convicted of journalism’, a badge reading ‘I support soldiers A-Z’ and blue jeans as he entered the building.

However, he had changed into a plain black T-shirt by the time he arrived in court with his legal team.

The Society of Editors responded to Robinson’s claim that he was ‘convicted of journalism’ saying it was a ‘dangerous distortion of the truth’.

Executive director Ian Murray said that Robinson had broken the law by ignoring the laws of contempt that any junior reporter working for a reputable news provider would be aware of.

He said: ‘While anyone can claim to be a journalist in this country, and there is no appetite nor should there be for the licensing of journalists in the UK, the mainstream British media adheres to the laws of the land, is correctly regulated and ensures its journalists are highly trained.

‘I am not aware that Robinson has any formal training as a journalist, and to claim his trial and sentencing is an attack of journalism itself is a farce.

‘Sadly there are people who wish to see the media in the UK emasculated and these sorts of claims are so obviously unfounded they provide ammunition to attack us with.’