ONCE it counted a surgeon, a sea captain, and even a shopkeeper among its first residents, but today this little Georgian gem, tucked away in a quiet street behind the Royal London Hospital, belongs to a historic paint expert and comes as a delicious surprise.

Whitechapel is a rich mix of historical architecture and buildings erected since the last world war, but this little townhouse in Varden Street must be one of its most lovingly restored treasures. Even the intricately painted number on the front door is in an authentic 18th-century font.

It’s a far cry from the state it was in when its owner, Portuguese artist and furniture designer, Pedro da Costa Felgueiras bought it ten years ago after it had been derelict for almost 20 and was on the verge of being demolished. 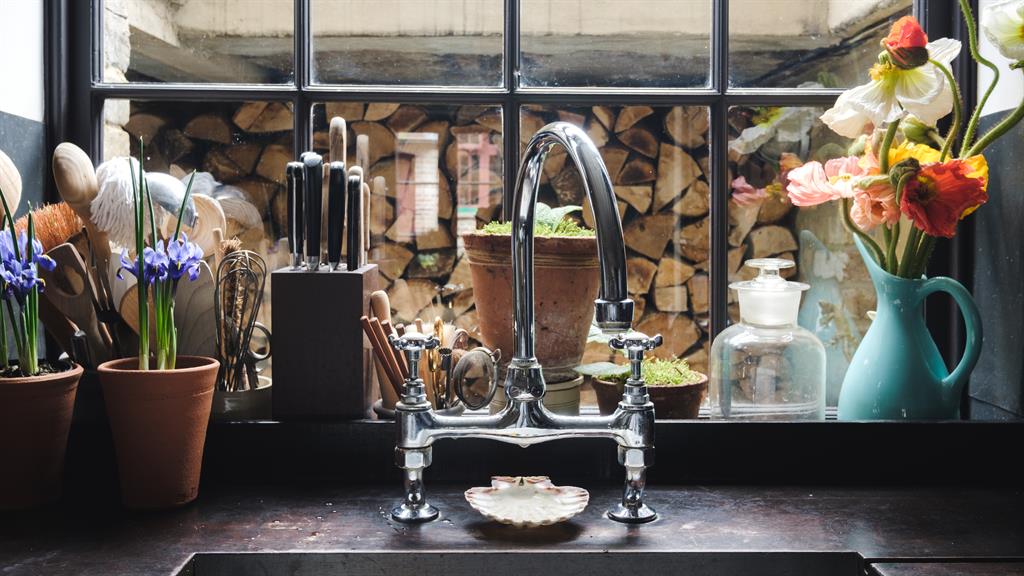 ‘There was no roof, no sewage, no drains and no electricity,’ he recalls. ‘There was rubbish up to my knees.

‘These houses had begun life in 1812, built by the Royal London Hospital’s charitable foundation as a way of supporting the hospital before the NHS. They had middle-class owners.But by the time I bought the house…’ He shrugs and throws his hands in the air as he recounts his memories of despair. ‘It was dreadful. I spent the next seven years on my knees.’

Today the three-bedroom home is a splendid mix of the old and new; there is underfloor heating throughout and the ceilings in the basement are taller after Pedro dug down and underpinned the building.

He has used traditional materials and methods throughout his lengthy restoration: he hand-mixed the wall colours himself using mostly linseed oil and antique powder pigments.

In the entrance hall, a wall of richest blue (Blue verditer, to give it the correct name) has been created with a unique combination of pigments, while in the kitchen a warm yellow ochre features on the bespoke cupboards (the fridge is hidden behind a panel in the nearby hall). The walls are covered in white lime wash which allows the house to breath. The original coal hole has become a nifty utility area and the original panelling and staircases have been repaired or rebuilt. The floorboards on the stairs came from the stables of a house owned by Jane Austen near Bath.

Pedro has added a mansard roof extension to give the 1,442sq ft house four storeys, and this has been covered in handmade plain and pantiles. He also reclaimed the garden which, in more recent years had become a car park, to create a beautifully- symmetrical, lush space, with blossoming roses, little box hedges and splendid espalier trees climbing perfectly along the old brick walls.

There’s a summer house, too, with a mezzanine floor and loo. Honeysuckle (in two shades, naturally, one for colour and one for scent) climbs the back wall of the house. 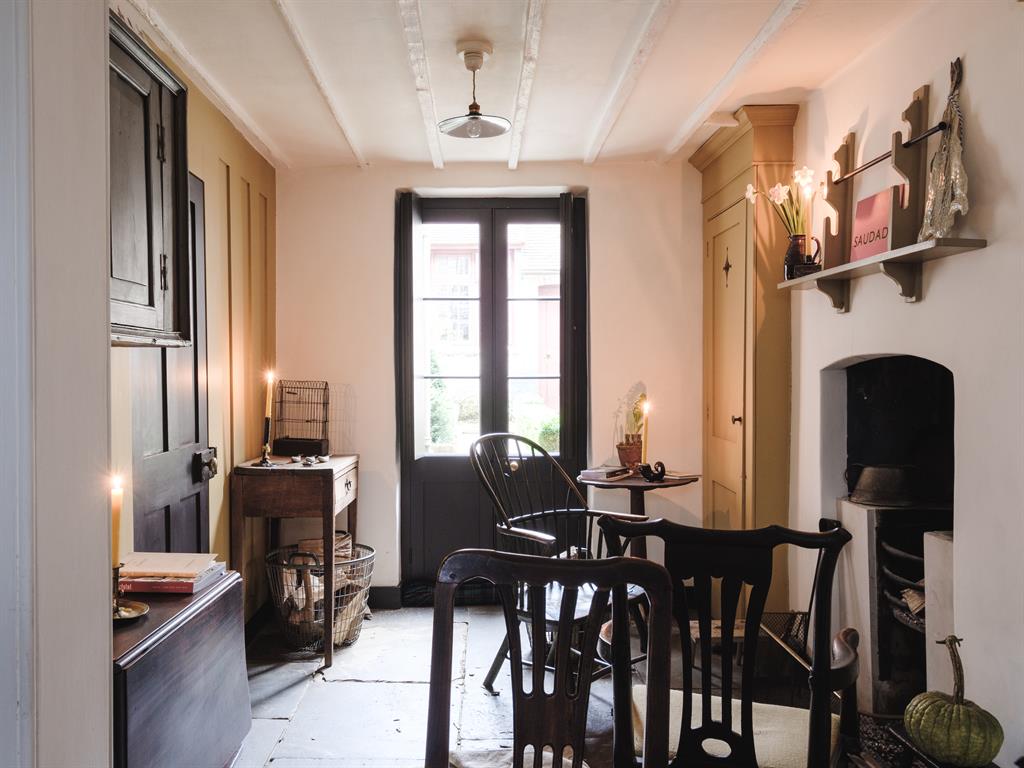 Though it has all the mod cons required for contemporary living, everything in this exquisite little home is bespoke; from the flagstone floors to the added little winter garden, or ‘giraffe’ room (‘as it’s so tall’) which is flooded with light through its many-paned windows and carries a lush leafy theme indoors from the walled garden.

The cast-iron fireplaces (including one in the kitchen) are all of the period and have been collected by Pedro from all over the country. The feature fireplace in one of the bedrooms had been covered in paint when he bought it, but when cleaned revealed it was made by Dale and Co, and had come from Ironbridge Gorge, the birthpace of the industrial revolution. Even the blinds, by Marianna Kennedy, are made from antique book cloth fabric.

‘I always wanted a Georgian house, but I couldn’t afford a grand one,’ explains Pedro, who studied restoration and architectural history in Lisbon before coming to London in 1990.

He set up Lacquer Studios in 1995, specialising in Oriental and European lacquer and historical paint techniques. This earnt him commissions that include redecorating the 18th-century house of artists Gilbert & George, overseeing the repainting of Strawberry Hill House in Twickenham and working on the Great Pagoda in Kew Gardens. 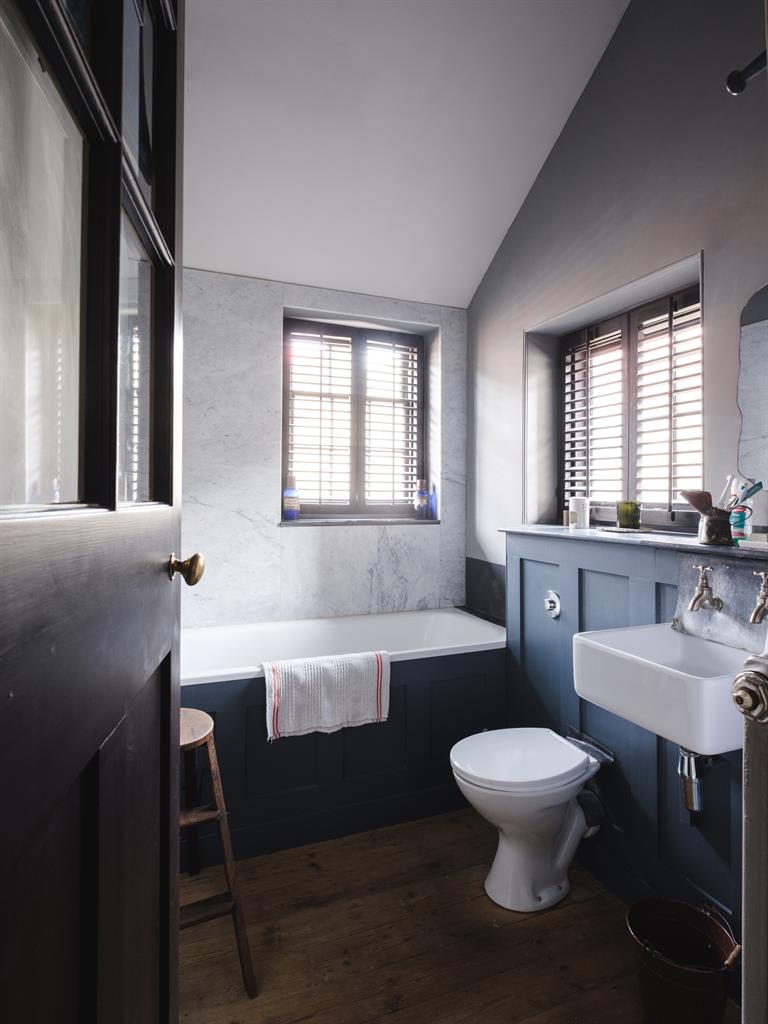 He produces his own furniture for The New Craftsmen. ‘When I came here, I introduced elements of the great, grand houses, such as the Huguenot houses in Brick Lane, into this smaller property, which is really a third or fourth-grade Georgian house,’ he says. ‘My aim was to put the house back as honestly and truthfully as I could. Many architects want to leave their mark on a house. I wanted to restore it and regain the house’s original personality.’

Pedro has also had some fun. The house has been decorated with his favourite quirky artwork and finely-cast Portuguese ceramics, some enormous, such as the large copper-coloured snake, frozen in a writhing motion, which lies on the dining room table. ‘She’s really very good-natured,’ Pedro reassures me with a grin. She is undoubtedly beautiful. But I’m still glad she isn’t one of the fixtures and fittings. This house has clearly been such a labour of love for Pedro, I ask him why he is selling and planning to leave London with his beloved German Pointer. ‘I’m not sure,’ he says candidly. ‘Am I doing the right thing? I’d like a new project. And I always dreamed of having a farmhouse in the Portuguese countryside. I’m sure there’s one waiting for me out there somewhere.’