YOU can’t get an Uber in central London; Instagram is replete with images of unsmiling models; influencers in cat-eye sunglasses are making peace signs outside Somerset House. It must be London Fashion Week (LFW), the biannual festival that sees the world’s top designers showcase collections across the capital. I hate it.

I don’t hate fashion: I bite my thumb at anyone who dismisses it as vacuous. This is the industry that, in 2017, fuelled the UK economy to the tune of £32billion. We all saw that bit in The Devil Wears Prada where Meryl Streep explains to Anne Hathaway how fashion trickles down from the lofty heights of the shows to the rails of the high street. I get how it works. But I loathe fashion week.

Full disclosure: I’m unfashionable. Not in an ironic way. I like skinny jeans and biker boots and oversized shirts. I happened upon this silhouette in 2007 and I’m faithful. I’m afraid of trends: culottes, bucket hats, the giant tractor-wheel trainers people pair with Laura Ashley dresses. Fashion is a language I’m too late to learn even the basics of.

My feelings on LFW are down to exclusion and ignorance but I can’t help feeling this sartorial extravaganza brings out negative industry stereotypes. People with clipboards run around as if in an operating theatre, tasked with performing open-heart surgery blindfolded with only a spoon. The self-aggrandisement is eye-popping.

‘Fashion Week is awful,’ says a former assistant at a fashion house, recalling fraught preparation for the shows a few years ago. ‘We had sheets of looks pinned on the wall. [The designer] wafted in and immediately asked us to take out the gold pins because the glare was apparently so aggressive. Someone was sent to source white pins.’

The same person spoke of being interrupted as she removed lint from knitwear on the eve of a show, and pushed into a cupboard because a singer had arrived for fittings and didn’t want to see any knackered staff picking fluff.

I’ve been to LFW a few times and always feel like I’m on safari, although it’s more terrifying: I arrive ready to be bullied by PRs wearing black, silk blouses and headsets. There are always girls in outlandish outfits shivering in the courtyard of Somerset House waiting for someone to ask to take their picture.

I can never get a grip on what anyone should wear. In one day I saw thigh boots, cowboy boots, knee boots, hobnail boots, Buffalo boots, Chelsea boots, hiking boots, Wellington boots and those wader-type boots Rihanna loves.

Inside the venues, anxiety looms large. The front row (#FROW) is fiercely guarded in case a nobody makes a bid for a place there. I had a friend who quit her PR job shortly after asking Alexandra Shulman not to sit in a #FROW seat because it was reserved for Alexandra Shulman. ‘Sometimes people refuse to go to shows if they are not seated where they would like to be,’ says a show producer with an eye roll.

It is often said fashion is fun but competitiveness over fatigue is customary, according to a friend who works for a magazine.

‘There’s plenty of chat about “fashion flu”,’ she says. ‘By the end of LFW people are like, “Poor me! I’m ill and exhausted,” but really they’ve just been drinking free negronis and scrolling Instagram.’

Whether LFW is a calendar highlight or makes you feel old and fat, it’s prudent to remember nothing’s ever what it seems. The best illustration of fantasy versus reality is here, in a recollection from a music publicist: ‘It was a super-hot A-list LFW party a well-known magazine threw. Queues went around the block. Meanwhile, inside, toilets had blocked and my friend literally stumbled across a bag of poo on the dancefloor.’

Fashion forward: The future of LFW 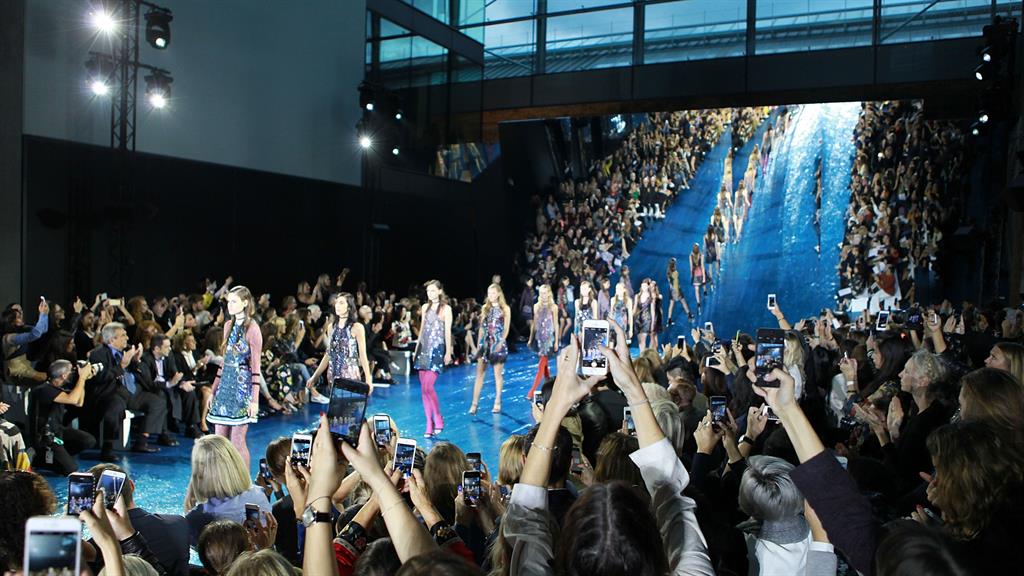 DESPITE the ongoing success of global fashion weeks in terms of visitors welcomed and money generated, many insiders believe change is afoot.

Expensive venue spaces, show staging and overheads mean many brands — especially young designers and small independent labels — cannot afford to stage a show (industry sources estimate big shows can cost as much as £1 million to host). The ever-growing power of Instagram and social media means they don’t really have to.

Smartphones and the internet enable consumers to keep in touch with seasonal trends and what’s being worn by everyone from celebrities to influencers at the touch of a button — content that is arguably more influential in getting shoppers to part with their cash than pictures of paid models at a fashion show.

The demand for new trends also means fashion houses increasingly produce several different collections each year, from ready-to-wear to cruise and couture, making it impractical and costly for some to show each collection.

There are still, however, rewards to be found for brands that do take part in fashion weeks. Data from Launchmetrics last year revealed that some labels get up to 800 per cent more online mentions during fashion weeks than the rest of the year.