THE Friday performance of this London revival of David Mamet’s tough talking 1983 play about American real estate agents was interrupted when Robert Glenister froze on stage.

The Hustle actor, who has been fending off tax-related troubles, had also collapsed during an earlier, preview performance.

After a 30-minute hiatus, the show’s US star Christian Slater announced that understudy Mark Carlisle would take over as hard-as-nails salesman Dave Moss. 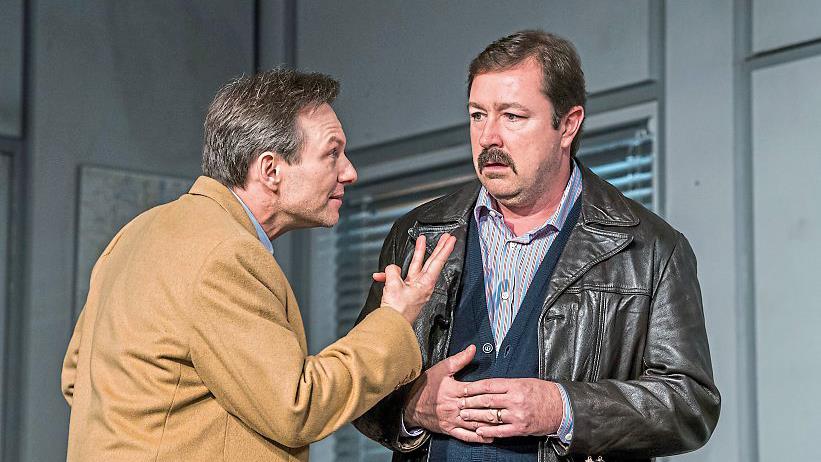 At the subsequent performance, which I saw, Glenister had not returned to play Moss, who plots to steal a list of all-important ‘leads’ (sales talk for customers likely to spend).

So how did the rest of the cast handle the pressure?

Mamet’s play is all about the vulnerability that lies beneath the tough talk of five salesmen.

Each has to scramble their way up the office league table before their deadpan manager Williamson (Kris Marshall of Death In Paradise and My Family] gives them the juiciest leads.

Stanley Townsend’s Shelly Levene sweats desperation as he cajoles, begs and bribes Williamson into giving him the break he needs.

Carlisle had to work from a napkin-coloured script during the restaurant scene, in which Moss conscripts a reluctant George (Don Warrington) to steal the leads.

Meanwhile, Slater, as the slickest operator Ricky Roma, delivers a superbly judged performance of measured aggression. It is as if the crisis caused by Glenister’s onstage breakdown has bled into the drama about men under pressure, giving Sam Yates’s production an extra dose of authenticity.

It was an impression reinforced by the deserved pats on the back Carlisle received at the curtain call.