Grief Is The Thing With Feathers

CILLIAN MURPHY rarely appears on stage, yet here he stars in virtually a solo show on one of London’s biggest stages, in Enda Walsh’s adaptation of Max Porter’s award-winning novella.

He plays a newly widowed Ted Hughes scholar who, in the grip of bereavement, finds himself visited by Crow — the anarchic trickster bird from Hughes’ 1970 poem sequence.

In Hughes’ conception, the amoral Crow embodies forces of savagery and damnation, but for the father, with two small boys to look after in a London flat, his mind capsized by grief, this bird of misrule becomes a weird sort of therapist. 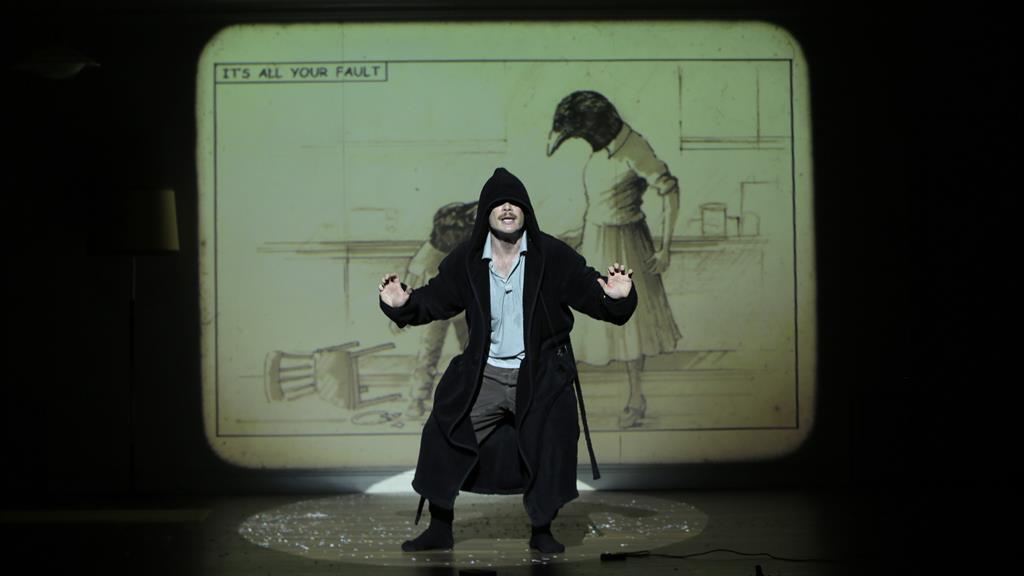 Crow takes up residence in the flat, and in Walsh’s staging, places his name in front of the father’s typewriter, shags the desk and scribbles all over the walls and, for a long and sometimes bewildering hour, wreaks restorative mayhem.

Porter’s novella is not an obvious work to dramatise, and although it allows Murphy’s physical powers full rein, the actor’s gain proves to be the book’s loss.

Murphy, bedraggled in black dressing gown, is both Crow and father, leaping around the stage, his amplified voice sounding just like Darth Vader and giving full bodily expression to the dissociative disorder of grief.

Yet he gives you precious little space to savour Porter’s prose, while the sons are badly marginalised. Walsh’s production, meanwhile, goes overboard, bashing the audience over the head with big-scale projections, apocalyptic sound and cheesy, entirely unnecessary video footage of the boy’s dead mother on the beach.

If you hadn’t read the book, for most of this show you’d be quite lost. Or even bored. Only in the last 15 minutes, when Crow departs, and Murphy and his sons speak quietly and eloquently about their loss, does it do what the book does from the start, and prick your heart.