A WOMAN whose husband died discovered secret papers which revealed he’d lead a secret double life — as a spy.

Audrey Phillips, 85, was married to Glyn — full name Glyndwr — for 64 years and knew him as a family man and civil engineer who loved to play for his local football team.

But until after his death his widow was unaware he had been working for the British Intelligence Force — since he was 13.

Audrey cleared his paperwork and found documents detailing his double life throughout the 40s, 50s and 60s — after they married.

It showed he became a ‘spy’ when he was pulled out of school in 1944 because he had a photographic memory and began to work for Operation XX.

The op was an MI5 counter-espionage project which saw Nazi agents in Britain used by the British to broadcast misinformation back to their controllers in Germany.

Glyn’s papers revealed as a youngster he was trained to crawl through concrete pipes into prisons to talk to German POWs, then crawl back out.

But even after the war finished, Glyn’s secret mission days were not over, as the captain continued to appear through his adult life.

Audrey, of Trowbridge, Wiltshire, said she was ‘astonished’ to read Glyn’s clandestine life story in 2017, after he died from Parkinsons in January 2015, aged 83.

The retired home economics teacher has now published Glyn’s life story into a book, titled Operation XX And Me: Did I Have A Choice?.

She said: ‘I was completely oblivious. I have so many questions now that will probably never get answered. Why did I not know?

‘I never noticed any time that he was away for a long period, as he used to work away from home quite a lot.

‘He wrote in his story that one of his missions was in a place called Portwrinkle in Cornwall. I couldn’t believe it when I read that.

‘I didn’t even know where Portwrinkle was. I had to look it up. 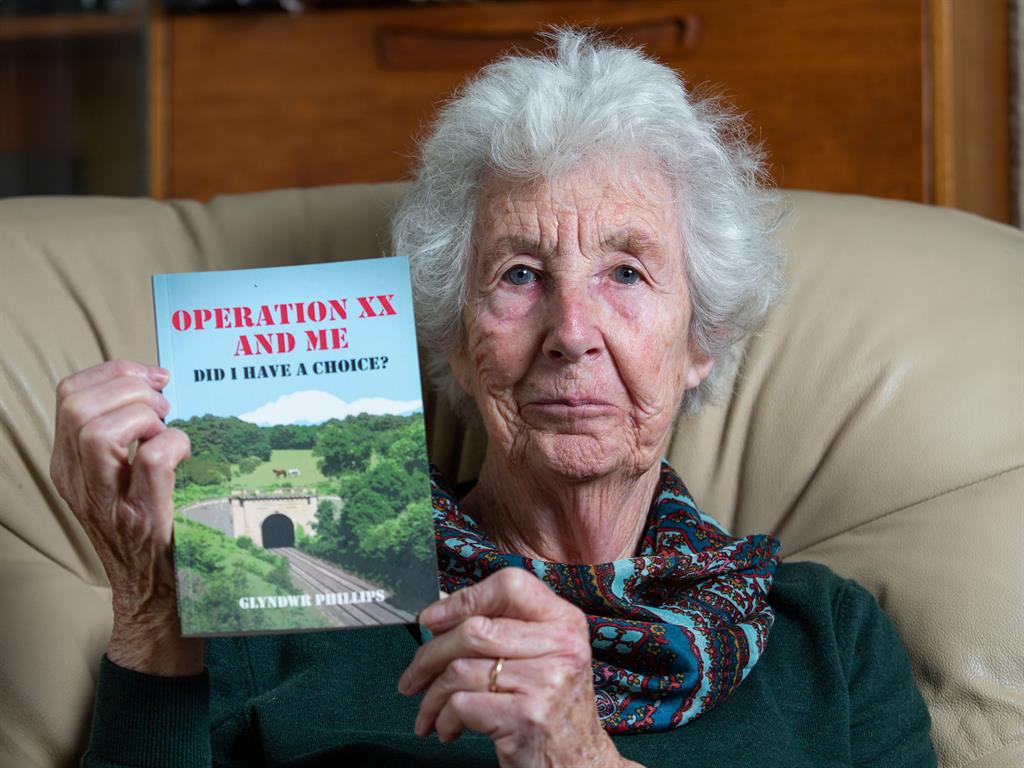 Glyn’s story tells how the only person who ever knew of his involvement with the British Intelligence Force was his father, who was approached by ‘the captain’ for permission.

Audrey said: ‘He kept the papers in a drawer at home, and occasionally would get them out to top up his writing, but he never invited me to read them, so I never did.

‘It took me three years after he died to read them — and I was absolutely astonished.

In his story, Glyn recalls that the British Intelligence captain — who is never named — recruited him as one of 20 young boys from around the country.

‘They were looking for someone who was interested in horses, small for his age, and had a photographic memory,’ Audrey said.

An amazed young Glyn recalled in his writing: ‘An hour later, to my astonishment, he seems to know more about my past than me.’

Glyn was made to attend the gym two afternoons a week, where he learnt self-defence, and was made to crawl through a concrete pipe ‘fifteen feet by eighteen inches’.

His task was to crawl through the pipe and then make his way back out backwards.

He soon after learnt that this was in preparation to pass messages to prisoners that the Intelligence Force was supposed to rescue from a country house.

The elusive character appeared three more times during Glyn’s adult life, each time with another mission for him — and each time, Glyn recalls asking him: ‘Do I have a choice?’.

On one occasion, when Glyn was 18 or 19 years old, he even got paid £20 by the captain for helping to capture two spies — the equivalent of two weeks’ wages at the time.

Audrey said: ‘It has made me wonder, did he get paid for any other jobs? And if so, where did it go?’

She also recalls another occasion when police officers showed up at their house, and Glyn began shouting at them and pushed her into another room.

Audrey added that her ‘stomach churned a bit’ when she read the context to Glyn’s odd behaviour that night — including the captain securing him a police apology.

And when he wrote about that later job in Portwrinkle Glyn even admits asking the captain: ‘What do I tell the wife?’

He writes in his story: ‘I look back now and think about what sort of life she must have had and how she put up with me.’

Audrey said: ‘I don’t think he was a particularly private man, usually — but I suppose he compartmentalised things.