FORMER Oasis frontman Liam Gallagher has said he would like to become the next prime minister, adding that he will ‘sort this pile of sh** out’.

Writing on Twitter, the musician closed his statement by referencing his second solo album, Why Me? Why Not, appearing to use its name as a campaign slogan.

He tweeted: ‘My name is Liam Gallagher I have 4 beautiful children I have dabbled in drugs over the years I’ve had many number 1s now send me the keys to no10 I’ll sort this pile of sh** out WHY ME? WHY NOT.’ 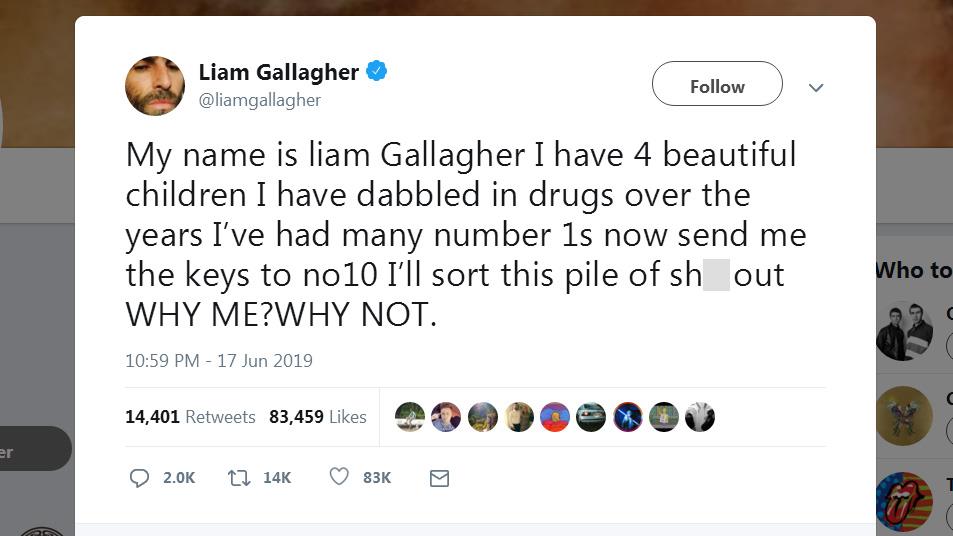 The comment from the 46-year-old, whose album is set for release in September, comes as Boris Johnson and other candidates are set to face a fresh round of voting in the Tory leadership race, the winner of which will replace Theresa May as PM.

Gallagher followed up the initial tweet with another reading simply: ‘ParLIAMent c’mon you know.’

Asked what he would do first in power, Gallagher said he would reform Oasis, the band he founded with his brother Noel.

‘Get Oasis back together I’d make it law,’ he tweeted.

The reaction from many to Gallagher’s apparent late entry into the leadership race has been encouragement.

‘You’d be better than any politician,’ wrote @foolsgoldbella.