FIVE centuries back, its coffers swollen by trade with the Americas, fiery Seville ranked among the world’s most powerful cities. Alas, such prominence diminished once a port was established further south at Cádiz.

This year, Andalucía’s capital is once again making international waves by dint of topping Lonely Planet’s list of top cities for 2018. As well as Game Of Thrones locations, the guidebook cites Seville’s Ano de Murillo (murilloysevilla.org), a 12-month celebration of local baroque painter Bartolomé Esteban Murillo, who was born 400 years ago this year. ‘Seville has bloomed into a city of bicycles and trams… and is keen to reinvigorate its artistic past,’ it says.

A new Tras Los Pasos de Murillo trail runs around the city’s orange tree-lined streets, covering 20 stops and 50 watercolours. It starts, as do I, at Casa de Murillo, a small, pretty house where the artist lived and worked. Videos tell more of Sevillian life back in the 1600s, while full-size reproductions of some of his finest creations, printed on white sheets, hang in the central courtyard.

Actual Murillo pieces await nearby in Seville’s cathedral — which doubles as a cool escape from summer climes of up to 35C — but I’m soon distracted. The building rises as high as your average gothic cathedral, then soars much further still. Up there are stained-glass windows intensified by sunlight, while a super-blingy central altar provides literal evidence of Seville’s so-called Golden Age. 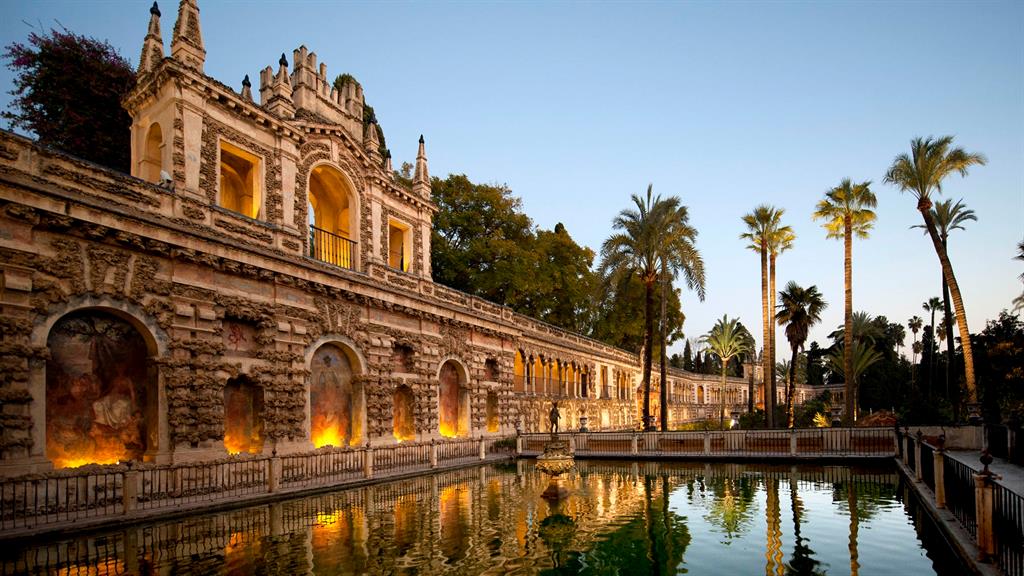 My stomach’s as empty as my lungs so I descend and walk to dinky Mamarracha (tapas from £3.50, mamarracha.es), one of a gaggle of gastro-bars rivalling Seville’s tapas restaurants. Though grilled meat is the especialidad, I go rogue to order smoked aubergine slivers and blood sausage with apple sauce. Both pull off the ultimate gastronomic trick: simple but incredible.

Only one Seville attraction outranks La Catedral: the Alcázar, a palace complex whose oldest corners date back ten centuries and is the planet’s finest example of Mudejar (Muslim-Christian) style.

It’s an incredible place. First I roam about inside, enjoying an unusually succinct audio guide and OMG!ing at an extravaganza of domes, arches, antechambers and kaleidoscopic courtyards.

Compact Seville is made for strolling. My amble about the former Jewish barrio of Santa Cruz, along narrow lanes with yellow houses, segues into a walk past armies of pavement tables in the huge Alameda de Hercules plaza. Revived by an Aeropress filter at Virgin Coffee (£4, virgincoffee sevilla.com), I climb the Metropol Parasol’s elevated walkways (£3, setasdesevilla.com), which provide even more of those fine views.

My feet ache: it’s time to sit down. I’m travelling with Super Break, which has just launched its own flights to Seville from seven UK airports, including Cardiff, Bournemouth and Humberside. Trips include a full-day excursion to Cádiz and sherry hub Jerez de la Frontera, and 48-hour passes on open-top sightseeing buses. These tick off the grand Plaza de España and most of Seville’s other sights during hop-on, hop-off loops around town. In Triana, daily one-hour walking tours cost no extra and tell of this riverside barrio’s gypsy origins and flamenco links.

And flamenco is where I finish, watching a 60-minute show at the Museo del Baile Flamenco (£19, museoflamenco.com). Encouraged by backing singers, its performers swirl frilly dresses and tap shoes at an incessant, CrossFit-like pace.

Seville’s political stature might have declined since Murillo’s day but, in travel terms, the city firmly remains a powerhouse.