A top night for comedy is led by the super-sized talents of Murder In Successville’s Tom Davis in a raucous Essex geezer of a sitcom. Honestly, it’s much funnier than that makes it sound.

A Christmas special for this corker of a comedy following the misadventures of lovable chumps Conor and Jock (Alex Murphy and Chris Walley). Robert Sheehan does a guest moon if you need any more persuading.

Mark Gatiss is a modern master of tales of the unexpected and this dark little number has Simon Callow as a hammy thesp who has the wind put right up him while recording a radio show in a creepy studio.

Stephen Merchant plays a little against type as a desperate dad who’ll stop at nothing to get his daughter that must-have Christmas present. Cue a 258-mile road trip with neighbour Dev (Asim Chaudhry) attached. 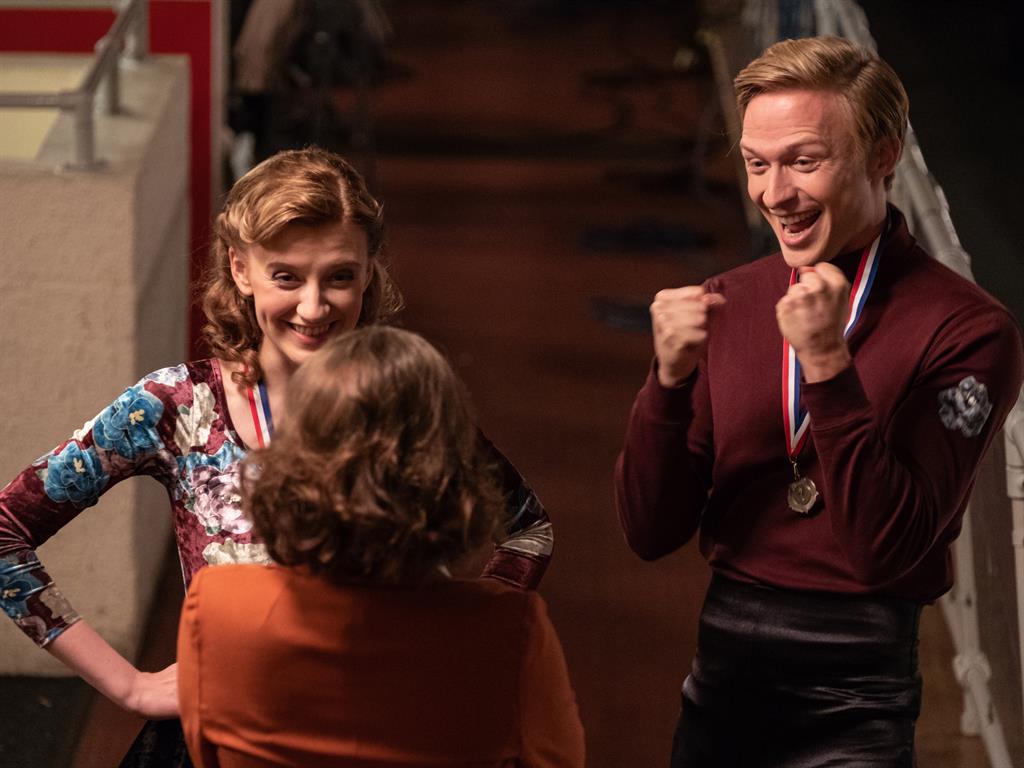 Britain’s iconic dance skaters get the biopic they deserve with Poppy Lee Friar and Will Tudor in the title roles. Get everyone in the room to have a go at that 18-second opening to Bolero. Could get deliciously messy.

The mighty Miriam Margolyes joins the sentimental nun saga, complete with a quartet of Chinese orphans. As in there are four of them — they’re not like child prodigies or anything.

John Malkovich brings a welcome touch of deadly gravitas to the well-thumbed role of Hercule Poirot in a moody three-part Agatha Christie that finds the famed Belgian detective apparently nearing his wits’ end.

David Walliams dials down the camp to play an evil headmaster in his own feelgood tale of young Tom, whose stay in hospital flips from nightmare to dream thanks to his nocturnal chums.

Gossip Girl star Penn Badgley is charmingly creepy as a deadly stalker masquerading as a sensitive bookstore owner. One to binge.

It’s too early to know if we’re in for a White Christmas but this is the next best thing: a wintry nature romp involving cute cubs. But don’t go ordering one online, they don’t make great pets.

Our cheeriest TV traveller unleashes his charm on the world’s most secretive nation — and reaches places other travelogues haven’t got anywhere near.

If you’re festived out by now here’s one of those extended true-life crime documentaries that Netflix does so well to feed your dark soul. We’re in a hippy corner of California and a young man has gone missing…

Back For Good or just back for a bit? Who knows, but Robbie Williams joins in with this 30th anniversary TT celebration.

Here’s our seasonal fix of Swedish weirdness sorted as we join a bunch of patients at a decidedly odd island therapy retreat. Yes, it’s set on an island — spookiness ahoy!

Bradley Walsh: When Dummies Took Over The World ITV, 9pm

Coruscating political analysis of the disaster that was 2018 from the Chase frontman? We’re pulling your strings — it’s a documentary about puppets.

Banish all thoughts of Susan Boyle from your head — this is Les Misérables sans chansons, as Victor Hugo intended. Dominic West, Lily Collins and David Oyelowo star as master adaptor Andrew Davies turns an epic, rambling tale of redemption into a six-episode drama.

What better way to start 2019 than by watching Idris Elba tied to a chair and being roughed up? Er, maybe not — but the return of wayward cop Luther, a maverick among mavericks, sure gives the New Year a kick-start.

Will, Jay, Neil and Simon are back together again for a 10th anniversary celebration of the brilliant sitcom. We won’t mention the movies.

Patricia Arquette, Benicio del Toro, Paul Dano, David Morse… do you need to know any more? OK, it’s winter, it’s a prison break and all hell is about to break loose…