THE flagship Nightingale Hospital — created in ten days to help the NHS cope with coronavirus — is being mothballed as infections plunge in London.

The facility, opened at the capital’s ExCeL centre at the end of March with help from military planners, has space for 4,000 patients but last night only 20 were still being treated there. They will now be transferred elsewhere, while staff will get commemorative T-shirts for their contribution.

The Nightingale could resume taking patients if the need arises. But at the moment London hospitals are coping and the new epicentre of the Covid-19 crisis appears to be the north-west.

For two days in a row, more patients have been admitted for treatment there than in London. The Nightingale has500 beds with oxygen and ventilators, and the framework was in place for the other 3,500 to go in if needed.

But Prof Charles Knight, boss of the hospital in Docklands, told staff in an email: ‘Thanks to the determination of Londoners following expert advice to stay home and save lives, we haven’t had to expand Nightingale’s capacity.

‘This is a significant point in how the NHS is managing this pandemic. It does not mean our role in London’s response to the virus is over.’ Health secretary Matt Hancock said the UK now has more than 3,400 spare intensive care beds.

It means the eight other Nightingale hospitals set up around the country may also not be needed.

Meanwhile, Boris Johnson urged the public to carry on abiding by the social distancing rules — and said coming out of lockdown too soon would be ‘the worst thing we can do’.

In a video message, he reiterated that his five tests — including confidence that there is no risk of a second peak — must be met before the rules are relaxed. The UK death toll rose by 288 yesterday to 28,734, the lowest increase for more than a month. But that leaves the country at only 345 behind Italy, which is the worst-affected country in Europe and second in the world behind the US.

And the north-west’s rise to the top of the chart for hospital admissions came after figures showed the death toll has been twice as high in the poorest areas of England and Wales as in the richest.

‘This is not a coincidence,’ said the mayor of Liverpool Joe Anderson. ‘The fact that we have now been swamped by this crisis, it is making it abundantly clear there are scandalous disparities within our country and the way in which people are living and the services that they have access to.’ 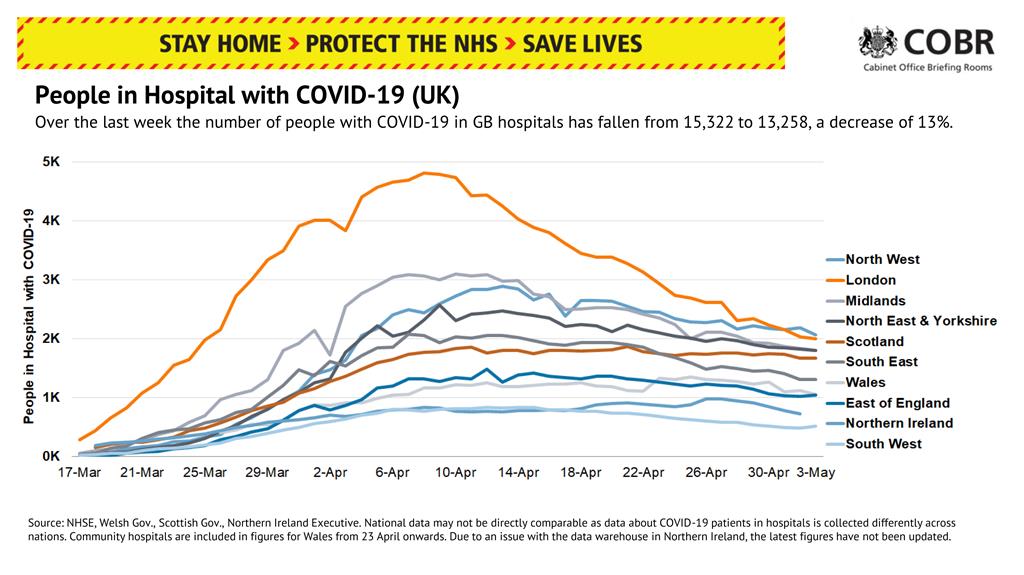 Mr Hancock hinted distancing rules could vary between regions, as he unveiled the NHS app for tracing who infected people have had contact with. He promised a ‘more targeted approach to lockdown while still containing the disease’.

‘What potentially could happen is that if you were to see spikes in the disease in specific regions of the country you could reimpose some of the social distancing restrictions on a regional basis,’ a senior government source said.

The global death toll was expected to pass 250,000 last night with more than 3.5million reported cases.

Detailed government guidance on how to reopen UK workplaces has leaked out, with proposals including extra cleaning and reduced hot-desking. But any decision on implementing a relaxation has been put back from Thursday to Sunday as the government waits for more data.