UNARMED policeman Bartek Tchorzewski has told how he confronted the London Bridge terrorists as an inquest ruled they were lawfully killed.

With colleague Sam Balfour, he came within six feet of the trio before the officers spotted what they believed were the attackers’ suicide vests.

Their heroism was revealed yesterday as an Old Bailey jury concluded Khuram Butt, 27, Rachid Redouane, 30, and Youssef Zaghba, 22, were lawfully gunned down by police.

Britain’s most senior officer Cressida Dick hailed the ‘tremendous bravery and compassion’ of the police and public. Medics and bystanders also rushed to help save lives during the rampage around Borough Market on June 3, 2017, seen in video footage released for the first time.

PC Tchorzewski, 36, in an interview coinciding with the end of the inquest, said: ‘We were just thinking about stopping them. Assume the worst and you try to think what you may encounter and what we will do. But to be honest nothing can prepare you for that. No briefings.’

He said that when he saw the ‘suicide belts’, ‘you just have no tools to fight with that kind of danger so we made our decision to withdraw’.

When armed police arrived on the scene, PC Balfour, 25, who was also unarmed, feared he was in the line of fire and might get shot himself.

He said: ‘We started to shout, “That’s them, that’s them”, pointing out those terrorists, “Shoot them”.’

The Old Bailey had heard that City of London Police officers shouted warnings and opened fire as Butt, Redouane and Zaghba came at them.

Fearing Butt and Redouane could still detonate explosive devices as they lay injured, the police officers shot at them again, jurors were told.

A bomb disposal expert told the court he only realised the suicide belts were fake after he cut them off the bodies and held them up. Jurors deliberated for three-and-a-half hours to conclude that all three attackers were lawfully killed by police after they ‘ignored clear warning shouts’. 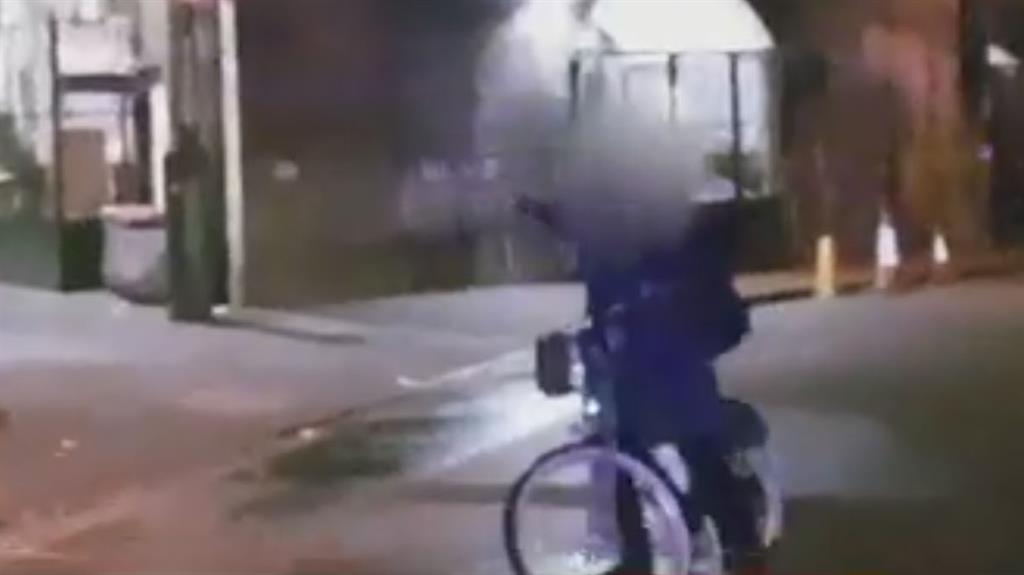 The newly released footage also shows a man on a hire bike, who has never been traced, cycling around the market pointing out where the attackers are to officers. Two bakers, one armed with a broom and the other with a pair of plastic pallets, walk through the market to confront the terrorists.

The attackers randomly mowed down pedestrians on the bridge before killing eight people and seriously injuring 48 more.

Met Police Commissioner Dick added: ‘The response that night under the most extreme and chaotic circumstances was quite simply extraordinary.’