Thomas Griffiths, now 18, attacked Ellie Gould, 17, at her home in Calne, Wiltshire, on May 3 after she ended their relationship to concentrate on forthcoming exams.

He carried out ‘the most appalling attack’ on keen horse rider Ellie, who bravely tried to fight him off by scratching his neck, before leaving her lying in a pool of blood, Bristol Crown Court heard.

Before leaving the house, Griffiths ‘arranged the scene’ by placing Ellie’s left hand on the handle of the knife, which he left in her neck.

Griffiths attempted to clear up the scene with cloths that he placed into a bag and later discarded in woods, before driving back to his home in nearby Derry Hill.

The school prefect told a neighbour that he had caused the scratches on his neck due to stress and asked her to drive him back to Hardenhuish School, which he and Ellie both attended.

He sought support from a school matron and his mother then drove him home, where she unwittingly washed the clothes he had been wearing when he murdered Ellie. 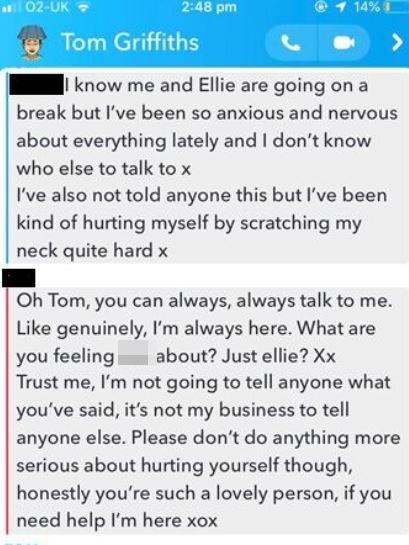 Griffiths sent messages to the schoolgirl that afternoon and also messaged her friends, telling them he had self-harmed on his neck and asking whether they had heard from Ellie.

Ellie’s father, Matthew Gould, returned home from work at 3pm to discover his daughter’s body in the kitchen. 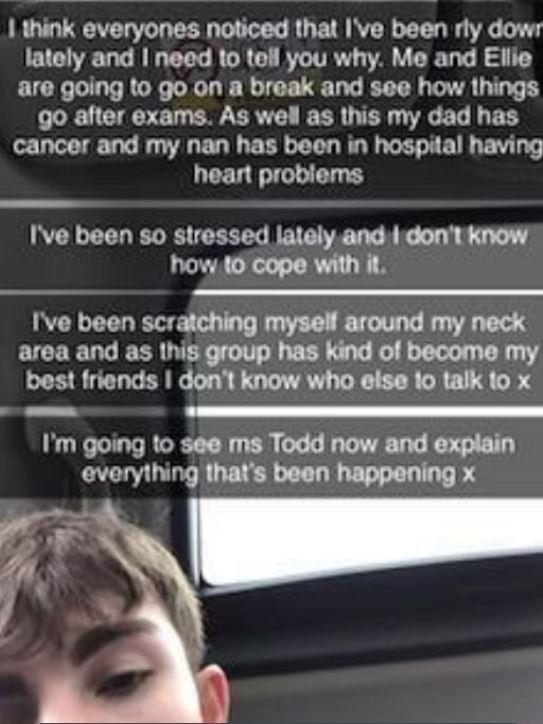 Mr Justice Garnham jailed Griffiths, who admitted murder, for life and ordered him to serve a minimum of 12 years and six months in prison.

‘The pain and terror she must have suffered in her last moments, as your frenzied knife attack continued, is beyond imagining,’ the judge told Griffiths.

‘Not able to face up to what you had done, you then attempted to cover up this dreadful crime.

‘First, and most chillingly, you left Ellie on the floor with the knife embedded in her throat and her left hand around the handle of the knife.

‘I have no doubt that you arranged the scene in order that it would appear to those who found Ellie that she had been killed, not by another person, but instead by her own hand or in some terrible accident.

‘Indeed, that was what her father thought when he found her.

‘There can be no more dreadful scene for any parent to contemplate than that which confronted Ellie’s father when he came home that day from work.

‘He came into his kitchen at about 3pm to find his beloved daughter laying on the floor in a pool of her own blood, her neck and face cut about, and a kitchen knife embedded in her throat.’

The judge said Ellie was ‘entirely beyond saving’ when her father discovered her body.

Ellie and Griffiths, who swam at county and international level, had been in a relationship since January 2019.

In a message to friends at 6pm on May 2, Ellie announced that she had ended the relationship and he had not taken it well.

On the morning of May 3, Griffiths was driven to school by his mother, Rachel Griffiths, but he returned home by bus a short time later.

The learner driver hid in a wardrobe at his family home and waited for his mother to leave before illegally using his Ford Fiesta to go to Ellie’s home, arriving at 10.58am.

Richard Smith QC, prosecuting, said: ‘Griffiths became angry, perhaps by Ellie’s continued rejection of him, and he attacked her.’

The court heard that Griffiths put his hands around Ellie’s neck before stabbing her at least 13 times, mainly to the left side of her neck.

At 11.45am, a text was sent from Ellie’s phone, telling friends that she was not going to be at school that day.

Griffiths left the Gould family home at 11.51am and drove himself home, where he told a neighbour he had self-harmed, in order to explain the deep scratches to his neck.

‘In truth, the injuries to the defendant’s neck and to his hand were nothing to do with self-infliction but very much more likely the product of his young victim having fought for her life as she was attacked,’ Mr Smith said.

The neighbour drove Griffiths back to school, where he spoke to the matron and sent messages to Ellie’s phone.

He was collected from school by his mother, whom he asked to wash the clothing he had been wearing earlier that day and drive him to a friend’s house.

In a victim personal statement, Mr Gould said: ‘The image of Ellie lying there on the floor has haunted me ever since that afternoon.

Griffiths was arrested outside his friend’s home in Chippenham at 6.10pm and repeatedly lied to police.

He initially claimed he had not seen Ellie that day but admitted his actions three weeks later when faced with overwhelming evidence by police.

Sasha Wass QC, representing Griffiths, read a letter the teenager had sent to the court to apologise for his actions.

‘I have truly let myself down and I hope one day I will be able to explain to myself and others why this happened,’ he wrote.

Speaking outside court, Det Ch Insp Jim Taylor said there were no ‘warning signs or red flags’ about Griffith’s behaviour before the murder.