A HEALTHY north-south divide is not just exclusive to our shores. While most people flock to northern or central Italy, lured by the likes of Rome, Venice and Florence, the soulful south is no less inviting.

The change in season brings rich colours that bathe the mountains, volcanoes and rolling countryside in fiery tones and also brings new grub — chestnuts, mushrooms and squashes, for starters.

From coastal cathedrals and the birthplace of pizza, this is a diverse region that’s easier to get to than ever thanks to new year-round flights with Easyjet (returns from £60, easyjet.com) from Gatwick to Bari, the capital of the Puglia region and located on the shores of the Adriatic.

About 40 miles to the south-west of Bari is the ancient city of Matera, a Unesco World Heritage Site that has been named next year’s European Capital of Culture. There’s good reason for such an accolade. It’s all about the Sassi district, dotted with 1,500 natural caves etched into steep ravines that were expanded and burrowed by locals in the Middle Ages. These primitive dwellings are believed to be among the first places where people settled in what we now call Italy.

Don’t miss a visit to the Crypt Of The Original Sin, the walls etched with artwork more than a thousand years old, leading some to call it the ‘Sistine Chapel of Rupestrian Art’.

As novel nights go, they don’t get much better than bedding down in a prehistoric cave close to Matera. The luxurious Le Grotte della Civita (doubles from £137, legrottedellacivita.sextantio.it) consists of 18 vaulted rooms within the sturdy stone walls of original caves with minimalist furnishings, tall arches and hand-wrought glass windows. With just ten suites and decadent interiors (think Baroque stonework and 18th-century opulence), the Palazzo Bozzi Corso in Puglia (doubles from £395, palazzobozzicorso.com) opened in June. Located a short distance from the Basilica Santa Croce in the city of Lecce, it has a small garden and an honesty bar, making it the perfect little Italian hideaway.

Italy has led the way in art for centuries but it’s not just the Renaissance masters who can claim all the glory. The country’s more contemporary visionaries are also making a name for themselves, particularly around Naples, which is at the forefront of the modern art scene with artists and independent galleries pushing new boundaries.

A rolling exhibition programme led by Giuseppe Ruffo (giusepperuffo.com) gives artists from around the world a revolving platform to showcase their work in unusual venues across the city.

‘We have a different artist present a single exhibition or installation every two weeks designed to highlight diversity,’ says Ruffo. ‘We even had one in a pizzeria.’ 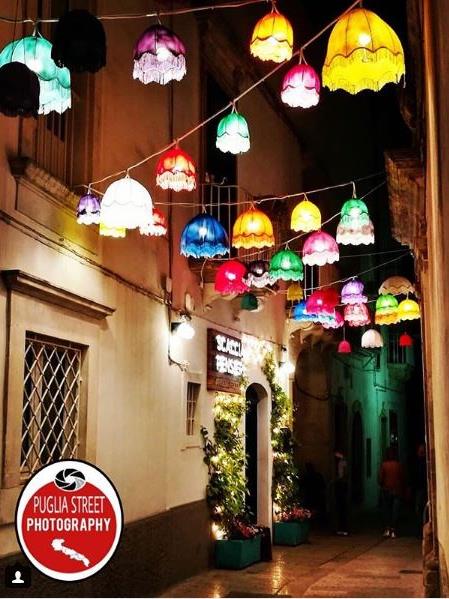 @pugliastreetphotography, run by street snapper Andrea Siena, specialises in images of the region, including this one taken in Martina Franca.