HURRICANE-STRENGTH winds and a deluge of rain brought chaos as the ‘storm of the century’ barrelled its way across Britain yesterday.

Swathes of the transport network were shut down, with trains, flights and ferries cancelled and roads blocked by accidents and fallen trees. 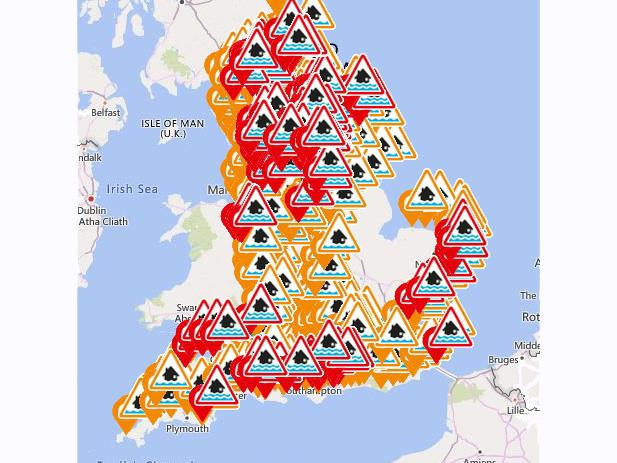 Torrential downpours caused rivers to burst their banks and forced dozens of families out of flooded homes, with Cumbria town Appleby-in-Westmorland among the areas severely affected.

More bad weather is forecast for today. Yellow weather warnings are in place for strong winds in southern England and heavy snow in the North and Scotland. And trains could be halted or delayed because of debris that has fallen on tracks.

Senior meteorologist Helen Roberts, of the Met Office, said yesterday: ‘In terms of area this is probably the biggest storm this century. I have not seen amber warnings on this scale, across all of Wales and much of England.

‘The yellow wind warnings cover the whole of the UK.’ A string of major sporting fixtures were called off due to waterlogged pitches as Ciara swept through. Gusts of 97mph were recorded at The Needles on the Isle of Wight, while north Wales village Aberdaron was battered by 93mph gales.

Almost 7in of rain fell in just 24 hours in Honister Pass, Cumbria. And the Bridge House guest house partly collapsed in Hawick, Scottish Borders, when its foundations were washed away. Staff and visitors were believed to have left beforehand.

There were no immediate reports of serious injuries from the storm last night but there were lucky escapes across the country. A man suffered minor injuries and was trapped for more than an hour after a tree smashed on to his car in Flitwick, Bedfordshire, with police describing his fortune as ‘remarkable’. And a London-bound train hit a fallen tree in Swanley, Kent.

Network Rail thanked passengers for staying calm as they were taken off the carriages. It tweeted: ‘Nobody was hurt, thankfully, and it’s a good illustration of why we have a 50mph speed restriction in place.’

The winds toppled a lamppost that fell across three lanes of the M20 near Maidstone in Kent, narrowly missing cars. And the entire roof of a gym in Birmingham was ripped off.

An RNLI boat nearly capsized during the rescue of a surfer who had lost his board while out in turbulent conditions off Hastings in East Sussex.

And firefighters in Blackpool had to rescue a motorist whose car became stuck in deep floodwater. ‘Do not travel’ warnings were issued for Hull Trains, the Caledonian Sleeper, Grand Central, Great Northern, LNER, Southeastern, Northern, Thameslink, TransPennine Express and Southern.

Disruption was so severe at London’s Euston Station that some passengers had to be locked outside by bosses to prevent overcrowding. A passenger on a flight from Florida said the plane’s landing at Gatwick on Sunday morning was aborted three times before it touched down on the fourth attempt.

Keith McDowall, 90, from Islington in north London, said: ‘I admit I was scared. It was veering around and it kept shaking. The pilot did a very good job to land it.’

■ A PASSENGER plane from New York was blown across the Atlantic in record time — carried by Ciara’s winds. The BA Boeing 727 from JFK arrived at Heathrow at 04.43am yesterday in 4hr 56min, thought to be a transatlantic record. The average has been 6hr 12min. Passenger David Redhill told MailOnline: ‘There was a round of applause. I looked around — everyone was astonished.’