TRIBUTES have been paid to Gary Rhodes, ‘the first rock star of cooking’, who has died aged 59 after he was suddenly taken ill at his Dubai home.

The spiky-haired TV chef was known to millions for shows like MasterChef, Ready Steady Cook and Hell’s Kitchen and for putting British cuisine ‘on the world stage’.

Rhodes was working on a new TV series when he died yesterday.

He was suddenly taken ill, while at home, during a break in filming, the TV production company said.

His family said he died ‘with his beloved wife Jennie by his side’.

Grosvenor House Dubai said the Michelin-starred chef, restaurateur and author was working ‘until the day he died’.

Great British Bake Off star Leith said: ‘Gary was the first rock star of cooking, making it cool for boys to cook.’

Oliver initially posted, on Instagram, that Rhodes had died in a ‘tragic fall’ before deleting the message.

He later wrote: ‘Sadly, chef Gary Rhodes passed away. My heartfelt sympathies to his wife, kids, friends and family, sending love and thoughts.

‘Gary was a fantastic chef and incredible ambassador for British cooking, he was a massive inspiration to me as a young chef.

‘He reimagined modern British cuisine with elegance and fun. Rest in peace Chef.’

Ramsay wrote on Twitter: ‘We lost a fantastic chef today in Gary Rhodes. He was a chef who put British cuisine on the map.’

Martin wrote: ‘Hugely influential in my life and the life of the British food scene. Gent and genius… RIP Gary, I can’t believe you’re gone.’

Harriott said that Rhodes ‘was the first to make cookery the new rock ‘n’ roll and will always remain a true icon for all of us’.

Tom Kerridge, formerly Rhodes’ sous chef, tweeted that Rhodes ‘is one of the greatest British chefs who almost single-handedly put British food on the world stage.

Simon Rimmer said Rhodes was a ‘champion of British food’ while Nigella Lawson said he was ‘such a talent’.

The Michelin guide said he was an ‘inspirational chef and British gastronomy owes him a huge debt’.

The father-of-two, who went to Dubai in 2007, was known as an ambassador for British cuisine and received Michelin stars.

He appeared on the Great British Menu and took part in Strictly Come Dancing in 2008.

Karen Hardy, who partnered with Rhodes on the show, said she was ‘truly speechless and lost for words but my heart and thoughts go out to his beautiful family at this time.’

His family appealed for privacy and said they were ‘deeply saddened to announce the passing of beloved husband, father and brother, Gary Rhodes’.

Rock Oyster Media and Goldfinch TV said in a statement they were ‘devastated’.

‘Gary was in the middle of filming a wonderful new series with Rock Oyster Media for ITV from his base in Dubai,’ they said.

Gary was taken ill very suddenly at home during a break in filming and died a short time afterwards.

‘Production was obviously halted as soon as Gary was taken ill and members of the Rock Oyster Team remain in Dubai to support the family as best they can.’

Jaideep Bhatia, PR director of the Grosvenor House Dubai, said the star was working ‘until the day he died’.

He said: ‘He arrived in Dubai in 2007 and had two restaurants, Rhodes 2010 at Le Royal Meridien Beach Resort and Spa, and Rhodes W1 at the Grosvenor.

The hotels where Rhodes worked, Grosvenor House Dubai and Le Royal Meridien Beach Resort And Spa, said: ‘No words can express our sadness at Gary’s death or our gratitude for the opportunity to work with him. Our thoughts and prayers are with the Rhodes family.’

Meanwhile, actor Kadiff Kirwan told of Rhodes’ generosity out of the spotlight, saying he met the chef when Kirwan worked in a restaurant to save money for drama school.

‘When I left to go to drama school he gave me one of his signed cookbooks, I opened it and there was £200 inside,’ he revealed.

Rhodes was born in Dulwich, south-east London and began cooking for his family at the age of 13, when his mother returned to work as a secretary.

He left school at 16 to go to catering college.

A van accident put him in a coma and initially affected his sense of smell.

He received an OBE in 2006 for services to the hospitality industry, something he described as ‘just unbelievable’ and even had ‘the edge’ over a Michelin star.

One of his first TV series was Rhodes Around Britain.

MasterChef judge Monica Galetti tweeted she was ‘honoured to have known you and shared your love of Margaritas’.

His long-time agent Caroline Teeling said: ‘I feel blessed to have had him in my life. Words cannot describe the shock and heartbreak we are all feeling at this time.’ 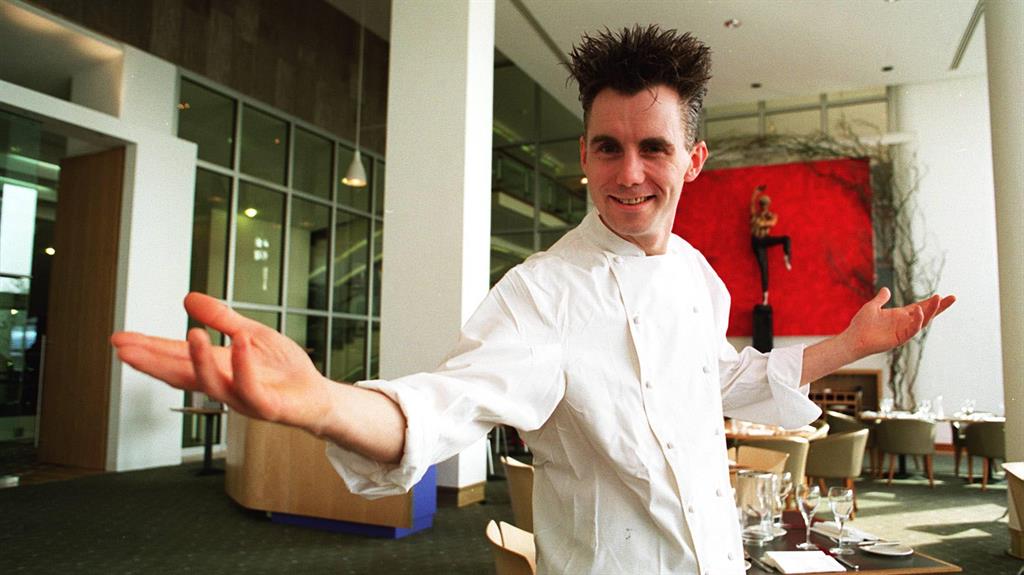 ‘Gary was one of the true greats of the British food world, part of that great gang of chefs that turned TV cooks into rock stars and encouraged millions of people around the world to get into their kitchens and start cooking’, he said.

‘He had a wicked sense of humour but his standards and work ethic were second to none. A driven, fastidious and incredibly hard-working individual, he was unerringly focused, always, on producing food of the highest possible quality.

‘It is a great privilege to have known him and worked with him over many years. He will be greatly missed by us all.’