MARINA SIRTIS, best known for playing Counselor Deanna Troi in Star Trek: The Next Generation, finds herself in familiar territory with her new play, Dark Sublime, at London’s Trafalgar Studios.

‘It’s about a mature actress who used to be in a sci-fi show, so I don’t need to do any research,’ laughs Marina, who grew up in Harringay and has retained her London accent despite living in Los Angeles.

‘When I read it, I called the director and said I had to play the part. It’s uncanny how my real life is reflected in this play. The fact people assume, having been on Star Trek for seven years and four movies, that I haven’t worked since. And the character is called Marianne, I’m Marina — that’s a bit creepy, as well.’ 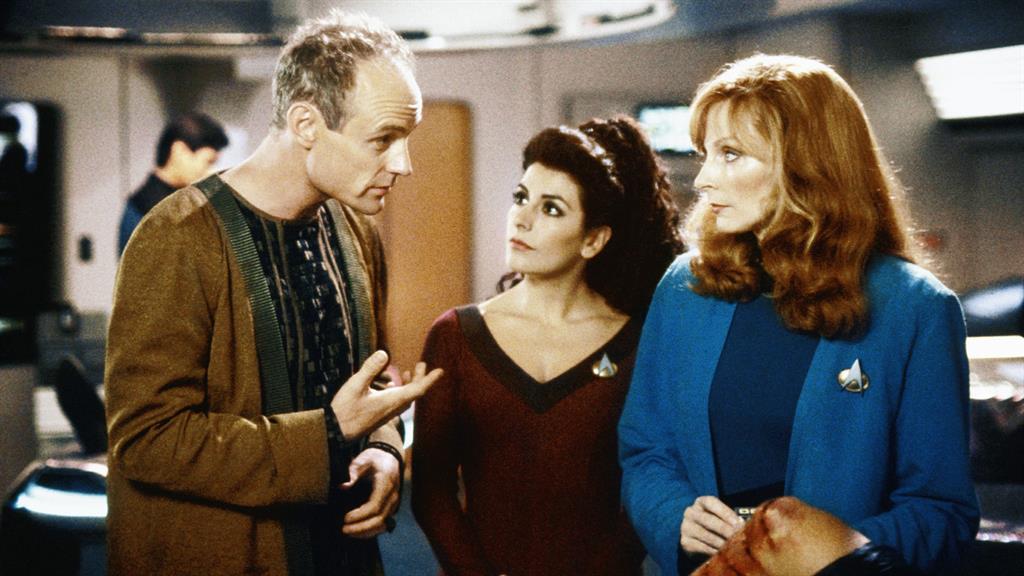 Marina stars as an actress who appeared in a British sci-fi show in the 1970s, perhaps similar to Blake’s 7. Marianne discovers that a co-star, who she has been in unrequited love with for decades, has started a relationship with a younger woman, adding to her heartbreak. But the play is a comedy, including recreations of some of the scenes from the imaginary TV show featuring the voice of Mark Gatiss as highly strung computer Kosley.

‘It’s funny, serious, nostalgic and there are moments it rips your heart out,’ says Marina. ‘The writer has worked in theatre his whole life and the play asks questions like, how were you gay in showbusiness when you couldn’t come out?

‘When I went to Hollywood in 1986, it was an open secret who was gay -but they couldn’t come out as their careers would have been over, especially the action hero types. So it touches on those issues.’

Marina moved to LA after becoming discouraged at only being cast in supporting roles in UK film and television. With her Greek background, she was considered ‘too ethnic’ by some casting directors.

‘I went to drama school and I’d got the job as Ophelia in Hamlet before the end of the final school year,’ Marina explains. ‘I was in the lift with the director of drama who was bemoaning the fact none of the girls would get any work but the boys would. I said, “There’s no need to worry about me, I’m playing Ophelia at the Connaught Theatre, Worthing.’’

‘He turned to me and said, “YOU can’t play Ophelia.” And I said, “Well, you’re the only effing person who thinks that.” I walked out and never went back. I was sick of being told what I was right for and what I wasn’t. At that time Ophelia was usually blonde and wafty and I’m not.’

Marina found greater opportunities in the US, landing the life-changing role of Deanna Troi after six weeks of auditions on the day her work visa was about to expire. Now, though, she’s considering moving back to the UK.

‘I’m based in LA. You’re put out to pasture at 45. And HD hasn’t helped. Hollywood is about glamour for women and HD highlights every wrinkle so they’re casting younger and younger women. So you have 27-year-olds playing nuclear physicists. You think, “When did she get her doctorate? When she was 12?’’ In America, actors are allowed to get old and actresses aren’t. It’s much more egalitarian in the UK.’

The day after Dark Sublime closes, Marina’s back off to LA to begin a new TV show — but she’s sworn to secrecy about what it is.

‘I’ve signed so many NDAs I feel like one of Trump’s mistresses,’ she laughs. ‘But I feel Britain is where my future lies, career-wise. Which is weird to say at 64. But as I have no intention of retiring, and hope to die on stage like Tommy Cooper, I’m just going to keep on going.’

■ Marina is in Dark Sublime at Trafalgar Studios until August 3, trafalgarentertainment.com