BRITAIN basked in the hottest day of the year so far — but sun worshippers were spotted ignoring guidance on social distancing.

Health chiefs feared the warm weather could put people in danger as the two-metre rule was abandoned on beaches including Brighton, Bournemouth, Southend and Blackpool.

In contrast, visitors to Broadstairs, Kent, appeared to be stretching out on the sands at a safe distance.

A top temperature of 32.6C (90.6F) was recorded at Heathrow during the afternoon. 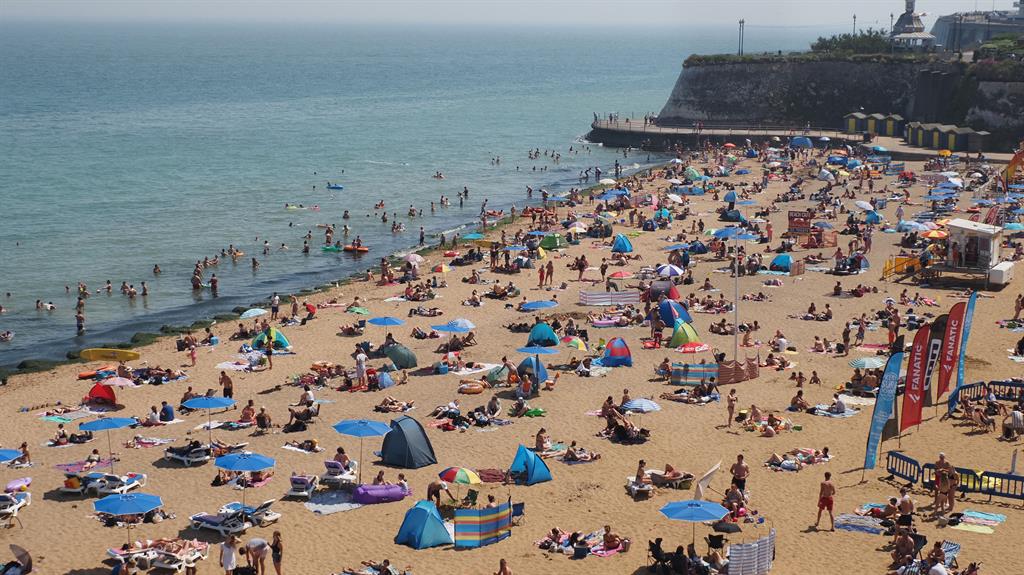 The mercury could rise even higher today, with the Met Office predicting temperatures of 34C (93.2F).

Despite the sunshine, the Met Office issued thunderstorm warnings for today, tomorrow and Saturday.

Meteorologist Alex Burkill also said UV levels would be hitting nine across Devon and Cornwall, adding: ‘That’s about as high as it gets in the UK.

Shoppers were warned that queuing could mean they are more exposed than usual.

Dr Lynn Thomas, of St John Ambulance, said: ‘You could end up in the sun for longer than expected on what would normally be a quick journey, such as queuing to enter the supermarket, so be prepared to look after yourself and others. Heat exhaustion and heatstroke are two of the most serious problems that can develop.’

Meanwhile, Glastonbury founder Michael Eavis posed in deserted fields at his Worthy Farm in Somerset on what would have been the festival’s opening day.

The event has been postponed until next year because of the virus.