HAD Sheffield United been second-bottom of the Premier League after seven games of last season, where they find themselves now, few neutrals would have been surprised.

It feels a long time ago now, so it is easy to forget the freshly promoted Blades were 8/13 odds-on favourites to return to the Championship, having gone up in second place behind champions Norwich.

But while the Canaries finished rock bottom, United flourished at a higher level. So when considering what has gone wrong at Bramall Lane, the starting point has to be what has gone spectacularly right — and not just last season, when manager Chris Wilder was a manager-of-the-year contender, but in the four-and-a-half years since he took charge of his boyhood club. 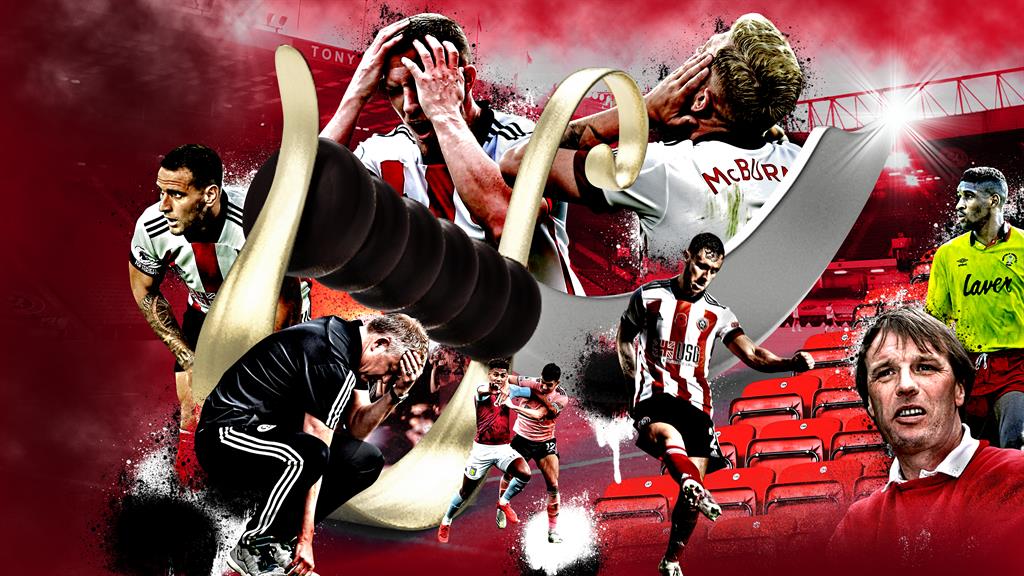 A progressive way of playing — with a particular focus on overloading their opponents in wide positions — was backed up by a consistency in team selection and a work ethic that saw the Yorkshire club hover around the Europa League positions for most of the season before finishing a hugely creditable ninth.

But at no other Premier League club has the contrast in pre-lockdown and post-lockdown form been more stark. When football was halted, Sheffield United had 43 points from 28 games and winning a game in hand would have lifted them into fifth, above Manchester United.

Since, they have taken 12 points from 17 games — the fewest of any top-flight side — and relegation form in anyone’s book. Injuries and a loss of form have been major factors.

The slump can be traced back to the very first post-lockdown game and the goal that inexplicably was not given at Aston Villa, and don’t forget a harsh red card for John Egan against the same opponents this term as evidence that fortune and decisions have gone against them, while it is also hard to escape the feeling that playing in empty stadiums has affected United more than most.

‘I genuinely think we miss the fans and it’s something we need to adapt to quickly,’ said midfielder Oliver Norwood recently. ‘It’s not the nicest place for opposition to come to, Sheffield United. We really take it to teams and play on the front foot.’

Even with such mitigating factors, those sorts of statistics would normally have a manager fearing the axe and such is the credit Wilder has built up that there is rather more discussion about Slaven Bilic, despite a fairly desperate-looking West Brom being above United in the table. Wilder says he has advised his players to avoid dwelling on the standings.

With a visit to Stamford Bridge tomorrow, things may well get worse before they get better. It is not the Blades’ fault a slow start has been compounded by a fixture list that sees them play Liverpool, Manchester City and now Chelsea in succession.

There were plenty of positives to take from the single-goal defeats in the first two of those. But should they leave the capital empty-handed, the stark fact is a return of one point from eight games — from a draw against Fulham at Bramall Lane — would see the campaign destined for a relegation dogfight.

‘We are always worried when we don’t get the result we are after but the confidence levels are okay, they’re not shot,’ Wilder said yesterday.

‘If they are shot you’re getting done five at Liverpool and five against Manchester City, but anyone who saw those games will see that we could have got something from both of them and we have to go down to Chelsea with that same belief.’

Blades fans with a longer memory will remember their club getting out of a much stickier situation than this. Back in 1990-91, Dave Bassett’s newly promoted side did not win a single game until a 3-2 victory over Nottingham Forest on the Saturday before Christmas — at the 17th attempt — and yet incredibly finished 13th, nine points clear of the relegation places. Little wonder the genial Londoner earned the nickname Harry Houdini.

That turnaround will not be lost on Wilder — he played an active part. A right-back in that squad, he was far from being an automatic choice but broke into the side just before their fortunes turned and eventually started nine of the Blades’ 13 wins that season.

Wilder and assistant Alan Knill have not given the impression of men about to make wholesale changes to either the personnel or the style that has served them so well since taking the helm. They also don’t have Brian Deane up front. His 13 goals were key to the 1991 survival but the big centre-forward was also a focal point for a side not afraid to go from back to front quickly, a tactic that had also served Bassett so well at Wimbledon.

A possession-based game has been Wilder’s trademark — the centre-halves famously more likely to overlap the wide men than punt the ball forward — but with £20million striker Oli McBurnie and Rhian Brewster, at £23.5m, in the side perhaps they are being too patient.

In the absence of Jack Robinson’s long throw, they did not even have scraps to feed off in the 1-0 defeat to City and Alan Shearer said on Match of the Day: ‘The first thought is to knock it sideways. It’s not as if they’re not committing men into the box. But there’s no point the forwards being in there if the ball’s not going to go into the box too.’

Wilder has shown in the past he is not afraid to tweak his preferred system to get results, evolving from the 3-4-1-2 formation which secured promotion to a 3-5-2 last season.

The fact the Blades had the fourth-best defensive record in the top flight underlined the success of that and — a disastrous spell against Wolves apart — that is largely continued this term. But four goals in ten games suggests another change of tack is necessary.

In Wilder, the Blades have a man who has proved his ability to both adapt and overcome the odds. He may just have to do that again.