POLICE have launched an urgent appeal for witnesses after a little girl was stabbed to death in an ‘unprovoked and random’ attack in front of her family on Mother’s Day.

The seven-year-old was stabbed by a stranger in Queen’s Park, Bolton, Greater Manchester, yesterday afternoon while on a day out enjoying the sunshine.

She was pronounced dead despite the best efforts of medics to save her.

A 30-year-old woman not known to the family was detained by a member of the public and later arrested on suspicion of murder.

She was today being quizzed by detectives investigating the brutal attack.

Officers continue to stand guard at the scene and the 22-acre park remains cordoned off.

Senior investigating officer Det Insp Wesley Knights said: ‘This is an extremely tragic incident in which a young girl was brutally attacked and sadly lost her life.

‘Our thoughts remain with her family who are being supported by specialist officers at this incredibly distressing time.

‘I would like to commend the bravery of the member of public who detained the woman until police arrived at the scene and arrested her.

‘Although we have a woman in custody, our investigation is very much ongoing.

‘This incident happened in the middle of a park at a busy time of day, and I am confident that there are a number of witnesses with valuable information who can help to assist with our enquiries.

‘If you have any information at all, no matter how minor you may think it is, I urge you to get in contact with police.’

The park was cordoned off with dozens of police officers guarding the entrances and perimeter.

Around ten police cars raced to the scene as well as North West Air Ambulance.

Witnesses say they saw the victim being given CPR as two adults stood ‘covered in blood’ nearby.

‘The family were out in the park, enjoying the spring sun, when in a totally unprovoked and random attack this little girl sustained horrendous injuries and sadly died a short while later.

‘This is a family’s worst nightmare. The incident is horrendous and I cannot begin to imagine what the family of this little girl are going through.

‘We are determined to quickly understand how this came to happen, leaving a young family so distraught and so devastated in an instant.’

Witnesses can email 69851@gmp.pnn.police.uk and upload footage or images to scd.cctv@gmp.police.uk.

Reports can also be made anonymously via independent charity Crimestoppers on 0800 555 111. 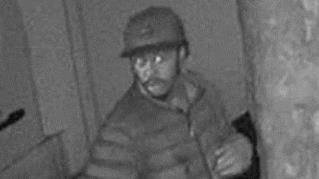 ■ Detectives investigating the fatal stabbing of a mother-of-two have called on the public for help finding her suspected killer who fled the scene. Shadika Mohsin Patel, 40, died in hospital from blood loss after being stabbed several times in a random attack in Altmore Avenue, East Ham, east London, at around 12.45am on Thursday. Scotland Yard have released a CCTV image (above) of a suspect and have appealed for help identifying him.